Is Israel Heading Toward Apartheid?

Akiva Eldar contends that Israel's discrimination against the Palestinians contradicts the intentions of its forefathers. 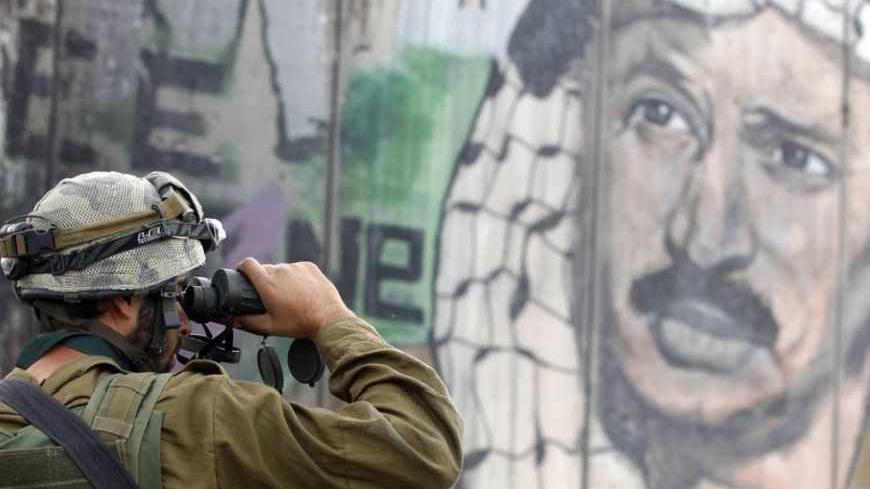 An Israeli soldier looks through binoculars before a mural depicting the late Palestinian leader Yasser Arafat on the Israeli barrier, during clashes with Palestinian stone-throwers at Qalandiya checkpoint near the West Bank city of Ramallah, Nov. 21, 2012. - REUTERS/Marko Djurica

The Jewish population between the Mediterranean and the Jordan River numbers an estimated 6.01 million out of a total of 12.4 million people living in that area, in addition to some 203,000 foreign workers. — (Central Bureau of Statistics (Israel) data, Dec. 31, 2012)

The non-Jewish population between the Mediterranean and the Jordan River is estimated at 6.11 million, 4.43 million of whom are Palestinians living in the West Bank, East Jerusalem and the Gaza Strip under Israeli rule. — (CIA data, July 2012)

On Tuesday, April 16th, Israel’s citizens will mark the Jewish state’s 65th Independence Day. Jewish state? Not exactly. The Proclamation of Independence (or as it’s commonly known, “the scroll of independence”), the founding document of the state of Israel, says:

''We appeal — in the very midst of the onslaught launched against us now for months — to the Arab inhabitants of the state of Israel to preserve peace and participate in the building of the state on the basis of full and equal citizenship and due representation in all its provisional and permanent institutions.''

“The catastrophe which recently befell the Jewish people — the massacre of millions of Jews in Europe — was another clear demonstration of the urgency of solving the problem of its homelessness by re-establishing in Eretz-Israel the Jewish state.”

When the declaration was being read in Dizengoff House at 16 Rothschild Blvd. in Tel Aviv on the 5th day of the month of Iyar in the year 5,708 (May 14th, 1948), the leaders of the new Jewish community could not have imagined that their grandchildren and great-grandchildren would be ruling millions of people by force, while making manipulative use of the historic traumas of the Jewish people, and losing their numerical advantage within the British-mandated boundaries of the land of Israel between the sea and the Jordan River.

While the ''Arab inhabitants of the state of Israel'' enjoy full-fledged citizenship (although they are still far from having full representation in the state's institutions), for 46 out of its 65 years of existence, Israel has been controlling millions of people with the power of military rule and placing more and more obstacles on the road to implementation of the values upon which the only Jewish sovereignty in the world is based. Many around the world and in Israel, too, are asking what is the significance, moral but also practical, of independent statehood in the 21st century of a state that denies the independence of another people.

Almost 10 years ago, Dr. Yossi Beilin, who served as minister of justice, deputy foreign minister, the leader of the left-wing Zionist Meretz Party and one of the architects of the Oslo Accord, warned that “if a border is not drawn between us and the Palestinians within several years, the state of Israel could deteriorate to using apartheid methods in order to rule the Palestinians who will form a majority west of the Jordan River.” A short time later, at the end of 2006, the difficult term “apartheid” appeared in an article published by Shulamit Aloni, who served as minister of education in the Rabin government and was the founder of Meretz. This time, it was not in future tense but rather as a depiction of the situation in the territories, in the direct context of the past trauma, the Holocaust. “It is unthinkable for the Jews, who were the ultimate victims, to do evil,” she lashed out, “and yet, the state of Israel carries out distinct and even violent apartheid in the area of the West Bank toward the native Palestinian population.”

This year, at the end of February, hundreds of people responded to an invitation to a conference held at the Van Leer Institute in Jerusalem. The conference, titled “Can Apartheid Be Possible in Israel?” was held in the wake of a public outcry over publication of a poll conducted by the Dialog Institute and published in the Haaretz newspaper in October 2012. According to the poll, 69% of respondents (a representative sampling of 500 Jewish Israelis) said that if Israel decides to annex the West Bank, they would oppose granting voting rights to the Palestinian inhabitants.

The conference was initiated by a new entity named "The Organization against Apartheid in Israel,” the first Zionist organization to dare to include the dirty word “apartheid” in its name. Among the founding team are Dr. Moraleh (Mordechai) Bar-On, a former Knesset member (Meretz) who was the chief education officer of the IDF; Dr. Alon Liel, who was director general of the foreign ministry and Israeli ambassador to South Africa; Ilan Baruch, also a former ambassador to South Africa; former Knesset member Mossi Raz (Meretz); Professor Menachem Klein (Bar-Ilan University) and Professors Amiram Goldblum, Peter Hillman and David Harel (of Hebrew University) and the lawyer and human rights activist Michael Sfard. All of the above mentioned people are active in various organizations dedicated to ensuring the existence of Israel as a democratic and Jewish state.

The new organization’s founding document says that within the state of Israel there is no rule of separation along racial or national divides, but Israel’s control of the Palestinians living across the Green Line causes legal, physical and infrastructural separation and discrimination, and separation of civil and human rights on the basis of nationality. It notes that the Israeli regime in the West Bank maintains separate legal systems for Palestinians and settlers living in the same area and that in certain places, especially Hebron, the apartheid is clear and evident.

The organization has begun gathering evidence — news reports, photographs and video clips – that document what it finds to be policies and practices of institutional discrimination on the basis of nationality between Israelis and Palestinians living in the West Bank. The organization also intends to monitor discrimination along lines of nationality on the Israeli side of the Green Line. It will expose to the public the words and actions of people and groups who present views strengthening separation on the basis of nationality, especially between Jews and Arabs and people of different backgrounds (Jews of Eastern-Sephardi origins, Ethiopian Jews, and more). The organization will call on the public to disassociate itself from them and to stop them from propagating their ideologies. The organization will also denounce Palestinians who encourage harm to the rights of the other nation, “while recognizing the difference and lack of symmetry between the occupier and the occupied, the ruler and the ruled.”

Eleven years ago, the leaders of 22 Arab states, followed by the leaders of the 57 Islamic states, wrote that in return for Israeli withdrawal from the territories captured in 1967 they would declare an end to the Arab-Israeli conflict, sign agreements with Israel that would ensure security and peace for all countries in the region and establish normal relations with Israel. By so doing they cancelled, de facto, the famous three “No”s adopted by their predecessors 46 years ago at the Khartoum Conference: “No to peace,” “no to recognition,” and “no to negotiations with Israel.''

Sixty-five years ago the leaders of the Jewish state wrote in Israel’s Declaration of Independence: “We extend our hand to all neighboring states and their peoples in an offer of peace and good neighborliness, and appeal to them to establish bonds of cooperation and mutual help with the sovereign Jewish people settled in its own land.”

I am convinced they did not mean neighborly relations of the kind that have existed now for 46 years between a handful of lords of the land, who will dance on Independence Day in the old quarter of Hebron, and the hundreds of thousands of Palestinians who, as always on Jewish holidays, will hide out in their homes.

Akiva Eldar is a contributing writer for Al-Monitor’s Israel Pulse. He was formerly a senior columnist and editorial writer for Haaretz and also served as the Hebrew daily’s US bureau chief and diplomatic correspondent. His most recent book (with Idith Zertal), Lords of the Land, on the Jewish settlements, was on the best-seller list in Israel and has been translated into English, German and Arabic. In 2006, the Financial Times named him among the world’s most influential commentators.