On the occasion of Jerusalem Day, which is not celebrated by 67% of residents, Akiva Eldar wonders what could happen if the so-called “united city” combined to vote for a Palestinian Jerusalemite candidate. 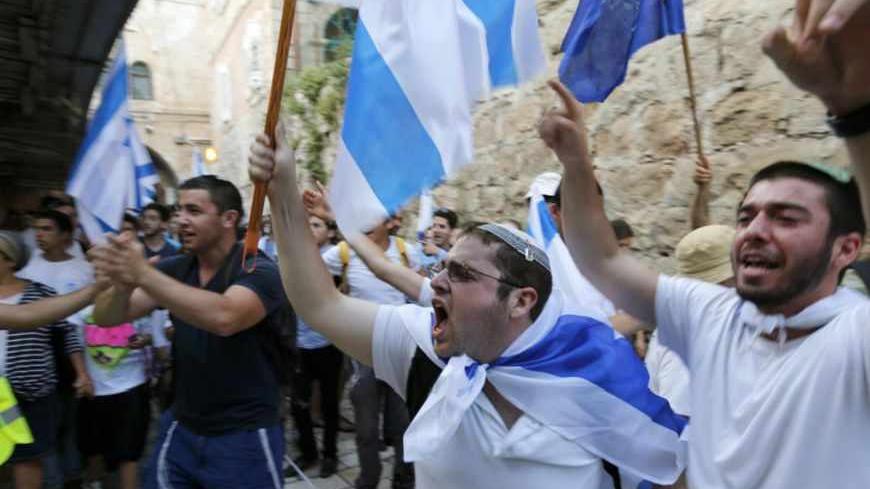 Israeli men carry flags as they celebrate in Jerusalem's Old City during a parade marking Jerusalem Day, May 8, 2013. - REUTERS/Ronen Zvulun

Bashaer Fayyad-Kalouti never celebrates “Jerusalem Day,” and this year was no exception. The day, which for Jews marks the freeing of the city in the 1967 Six Day War, is not a festive occasion for her. Although Fayyad-Kalouti, the wife of the outgoing Palestinian Prime Minister Salam Fayyad, is a resident of Jerusalem, and holds an official, blue, Israeli identity card, she is unlikely to exercise her right to vote in the coming municipal elections in November. The same holds for most of the 370,000 Palestinians living within the city’s municipal boundaries (more on this below).

For the Arabs of East Jerusalem, who constitute some 36% of the city’s population (according to Interior Ministry data), Jerusalem Day is a day of defeat and humiliation. Defeat, because on the morning of June 7, 1967, Israeli paratroopers conquered the Old City and the Western Wall; humiliation, because of the “March of Dancing Flags” held around the city each and every year on the 28th of the Jewish month of Iyar, to mark that day. Imagine this: thousands of young Israeli men and women dancing through the alleys of the Muslim Quarter of the Old City, toward the plaza facing the Western Wall, singing the praises of the “city joined and united,” waving large national flags and sometimes calling out racist invective. A true “Jewish Pride Parade.” The Palestinian residents, looking at the merrymakers from their homes and shops, get the clearest of messages regarding who controls the city and who is controlled.

For an additional 31% of the city’s residents, the ultra-Orthodox non-Zionist and anti-Zionist Jews, Jerusalem Day is just another day of the week invented by those who violate the sanctity of the Sabbath and dare call themselves “Jews.”

Under Jordanian rule (from 1948 to 1967), East Jerusalem covered only 6.4 square kilometers [640 hectares, or  2.47 square miles]. After the Six Day War, it was “reunited” with the western part of the city, which had been under Israeli control since 1948. Israel annexed an additional area of 65 square kilometers [6,500 hectares, or 250 square males] from the West Bank to the city’s municipal boundaries and the city has since been termed, “Reunited Jerusalem.”

In reality, it is far from being so. If we assume that the most salient expression of “union” between the two parts of the city joined together 46 years ago is uniformity and equality in provision of public services and infrastructure — then a tall fence of discrimination divides the conquering society from its conquered neighbor. And I’m not referring to the security separation Fence.

According to data compiled by Dr. Meir Margalit of the Meretz faction in Jerusalem’s city council, who is in charge of East Jerusalem affairs, as well as from the Ir Amim organization, out of the total 2011 municipal budget of NIS 4.7 billion [$1.32 billion], only some 500 million (10.7%) were allocated to the Palestinian neighborhoods of East Jerusalem, whose residents, as previously mentioned, constitute 36%-38% percent of the city’s population.

To drive home this point, here are several select data compiled in advance of Jerusalem Day by the Association of Civil Rights in Israel:

— 85% of the Palestinian children live below the poverty line; there are only three welfare centers for more than a third of the residents, compared with 18 in the western part of town; there’s a shortage of some 1,000 classrooms in the municipal school system for the Palestinian population. Despite its commitment to the Israeli Supreme Court to reduce the shortage, only several dozen are built each year.

— The area allotted and planned for housing construction constitutes only 14% of the area of East Jerusalem; the maximal floor area ratio in the Palestinian neighborhoods is 25%-50%, as opposed to 75%-125% in Jewish neighborhoods; only 13% of the housing units approved for construction in the city between 2005 and 2009 were in Palestinian neighborhoods; there are only four infant wellness clinics in the East, as opposed to 25 in the West; there’s a shortage of some 50 kilometers of sewage pipes and a resulting, prevalent use of septic tanks.

— No country in the world recognizes Jerusalem as Israel’s capital. There’s not a single embassy in the city and foreign dignitaries try as much as possible to refrain from meeting Israeli officials on the other side of the “municipal line” dividing the city, which is actually a section of the Green Line. The United States, Israel’s greatest friend, has not implemented the 1995 congressional resolution to move its embassy in Israel from Tel Aviv to Jerusalem. Every six months the US president signs a waiver postponing the move for reasons of national security. As far as the international community is concerned, sovereignty over Jerusalem is one of the issues that must be decided in negotiations over a two-state solution. For the US administration, The President Bill Clinton parameters, which propose adding the Palestinian neighborhoods to the West Bank under the sovereignty of a future Palestinian state is relevant today, as well.

But the facts that Israel has created on the ground are having the opposite effect. Construction of the 142-kilometer Separation Fence around the city and within its boundaries, closure of passage points from the city to the West Bank and curtailment of the Palestinian Authority’s activity in the eastern part of the city, have all deepened the distinction between the Palestinian population in East Jerusalem and the Palestinian population living “across the fence.” Some 50,000 Palestinians live in the area between the Separation Fence and the municipal boundaries of Jerusalem that borders the West Bank (creating a new de facto territorial definition).

On the other hand, residents of East Jerusalem enjoy freedom of trade and movement that residents of the West Bank can only dream of. Therefore, the strategy of Palestinian resistance to Israel’s annexation appears to be making way for a “if you can’t beat them, join them” approach. More and more Palestinian students opt for Israeli matriculation exams and preparation courses for Israeli universities. In this regard, there are even claims that Israel is deliberately weakening the Palestinian school system in order to cause students to transfer to the Israeli one. Young residents of East Jerusalem work in the western part of the city and spend their leisure time there, dress like their Jewish peers and speak their language.

The number of Palestinian who converted their status from that of Jerusalem resident to that of Israeli citizen has soared from 85 in the year 2000 to 700 in 2010. According to the assessment of Israel’s Ministry of Interior, since 1967 some 10,000 residents of Arab Jerusalem have assumed Israeli citizenship, most of them in the last seven years. This new status grants them the right to vote to the Knesset, in addition to the right to vote for and be elected to the position of mayor and to the city council. But, as previously mentioned, if the past is anything to go by, the vast majority of Palestinians will not be going to vote in the coming November elections. For them, participating in the municipal elections is tantamount to recognizing Israel’s sovereignty over the city.

How about if Fayyad-Kalouti decides to run for mayor and for the city council at the head of a Palestinian group, with the support of all the Palestinian factions in East Jerusalem? If most of the Palestinian residents, who account for 36%-38% of the population, were to respond to the call and cast their ballots, Jerusalem would become an experiment in bi-nationalism — and perhaps mark an end to Zionism, as well; if the experiment succeeds, in the next elections in 2017 the Palestinian mayor could form a coalition with the ultra-Orthodox, who currently constitute 31% of residents, to divide the budgetary pie in a just manner, shut down the city on Sabbath and cancel Jerusalem Day.

In conclusion: We wish to thank successive Israeli governments for preferring hollow declarations and boastful pride parades to just and logical political solutions, for the most unique city in the world.