According to Prime Minister Benjamin Netanyahu’s plan, Israel will exclude some Palestinian neighborhoods from the Greater Jerusalem municipality, while annexing other East Jerusalem neighborhoods. 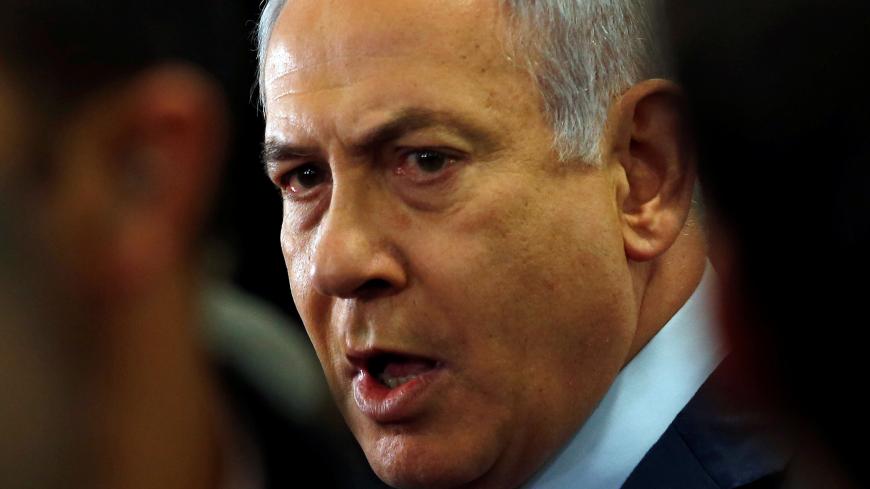 Israeli Prime Minister Benjamin Netanyahu speaks to the media at the Knesset, Jerusalem, May 30, 2019. - REUTERS/Ronen Zvulun

What did US Ambassador David Friedman mean when he hinted in a June 8 New York Times interview of possible Israeli annexation of certain parts of the West Bank? What lies behind the declarations by presidential envoys Jared Kushner and Jason Greenblatt regarding alternatives to the two-state solution? How can a ruler control lands that are not his without imposing sovereignty over them and make arbitrary decisions about granting or withholding citizenship from the residents? It turns out such a scenario is feasible. See the five-year plan — for supposedly reducing socio-economic inequality between Jews and Arabs — designed to complete the annexation of the core sections of Arab East Jerusalem, and a complementary measure to disengage from the Palestinian neighborhoods on the other side of the separation wall that runs between them and the city.

For over 50 years, ever since the 1967 Six-Day War, the state has tried to draw more Jews into East Jerusalem and to push out the Palestinians. The result is rather grim. According to data issued by the Jerusalem Institute for Policy Research on the occasion of Jerusalem Day, which marks the city’s 1967 “unification,” 17,000 residents left the “reunited city” in 2017 while only 11,000 people moved there. Some 96% of those emigrating from the city are Jews. The city’s population numbered some 900,000 at the end of 2017, 62% of them Jews. If these demographic trends persist, the Jews might be a minority in the city by 2045.

The facts neither back up the plans to “Judaize” Jerusalem nor the festive declarations about “city unity,” because real unity is impossible absent equality for all residents and equal budgetary allocation for public services and infrastructure construction. In a special May 2018 report on the development and strengthening of Jerusalem, the State Comptroller wrote that 76% of the residents in East Jerusalem’s Arab neighborhoods, 85% of them children, subsist below the poverty line. The average per capita monthly income in the Arab neighborhoods is very low — 40% that of West Jerusalem’s residents. The physical infrastructure in all the East Jerusalem neighborhoods is crumbling and they suffer from a significant shortage of classrooms and public facilities.

The Israeli political leadership, both right and left, understands that the state cannot preserve Jerusalem in its current municipal boundaries while keeping a Jewish majority there. The persistent failure by all of Israel’s governments to square the circle — i.e., to maintain a Jewish majority in the city and control of its entire area (in its current municipal boundaries) — has generated a double move. Netanyahu’s government would like to complete the annexation of East Jerusalem’s inner parts, especially the area of the Holy Basin, and at the same time sever its external reaches, namely those Palestinian neighborhoods that are located on the external side of the separation wall. For Prime Minister Benjamin Netanyahu, such a double move would become a first step on the way to disengaging from the Palestinians. It would serve as a pilot program ahead of Israel annexing Area C, which is under Israeli control and represents about 60% of West Bank lands.

A former senior Israeli security official close to Netanyahu spoke about these plans with the International Crisis Group, directed by Robert Malley, the former coordinator for the Middle East and aide to President Barack Obama. The security official said that the prime minister had shared with him concerns that Israel’s disengagement from the Palestinians “is getting tougher.” The researchers, headed by Israeli researcher Ofer Zalzberg, published on June 12 a comprehensive study that details a significant step by the Netanyahu government for the annexation of the core sections of Arab East Jerusalem, cataloguing all occupied East Jerusalem lands in the Israel Land Registry.

Disengagement from the Palestinian neighborhoods on the other side of the separation wall would be carried out by redesigning the municipal boundaries of Jerusalem. Thus, these neighborhoods, such as the Palestinian Shuafat refugee camp, for instance, would be transferred to other Israeli regional councils. In fact, the residents of these neighborhoods would keep the status of permanent residents but without Israeli citizenship. On the one hand, they would be cut off from the Jerusalem urban center (commerce, employment, services, and so on), and on the other, they would remain cut off from the Palestinian Authority (PA). Such a situation would surely increase the level of poverty, chaos and despair that could lead to resistance. Still, the Israeli political echelons believe that other than a weak protest by the European Union (EU) and its member states, the plan would not hit any snags and could thus serve as a trial balloon for a similar arrangement covering Area C of the West Bank.

Senior PA officials are closely following these plans. One of them, a close associate of Palestinian President Mahmoud Abbas, told the researchers that the PA would not cooperate with these initiatives. “Jerusalem should be handled comprehensively, not in bits and pieces at Israel’s whim,” the senior Palestinian was quoted as saying on condition of anonymity.

A veteran Palestinian lawyer who deals with land registration issues suspects that cataloguing the property of East Jerusalem residents is designed to enable the state to assume control of lands owned by Palestinians living abroad in order to hand them over to the settlers. This suspicion is bolstered by the government’s encouragement of radical right nongovernmental organizations that deprive the Palestinians of their homes, as is the case in the Jerusalem neighborhoods of Sheikh Jarrah and Silwan. Israel has already provided bitter proof of such intentions with its handling of the properties of so-called absentee Palestinian property owners whose families fled or were expelled from Israel in the 1948 War of Independence. A former PA official believes that if the land registration process is conducted gradually, the PA will have a hard time stopping it.

Zalzberg told Al-Monitor that the initiators of the five-year program and the people implementing it consider East Jerusalem as any other Arab town in Israel, like Nazareth. This is why they do not take seriously the extent of the reactions against the plan. The team of researchers estimates that the double move could start being implemented shortly after a new government is sworn in. Thus, they recommend all those parties concerned with peace in Jerusalem to block these moves. They call upon the international community, and especially the EU and Arab states, to warn Israel of the severe repercussions of implementing it. Nonetheless, according to the recent comments emanating from US President Donald Trump’s associates regarding the annexation option, and the stuttered remarks about the two-state solution, if Netanyahu succeeds in keeping his seat in the upcoming elections, he does not need to worry about reactions from that direction.