While Prime Minister Benjamin Netanyahu takes pride in his "united Jerusalem," the truth is that the city is more divided than ever as Jerusalem Day celebrants ignore the severe discrimination against the city's Arab population. 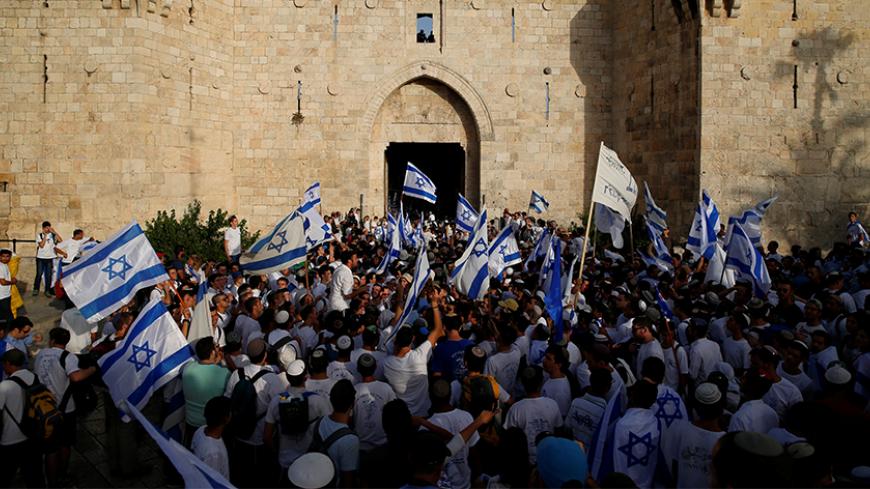 Israelis carry flags during a march marking Jerusalem Day, the anniversary of Israel's capture of East Jerusalem during the war in 1967, outside Damascus Gate of Jerusalem's Old City, June 5, 2016. - REUTERS/Ammar Awad

In his annual speech to mark Jerusalem Day, delivered at the city’s Mercaz Harav yeshiva on June 5, Prime Minister Benjamin Netanyahu aptly described the excitement and spiritual high Israelis felt on that day in 1967 upon touching the stones of the Western Wall and seeing the Israeli flag flying over the Temple Mount. “We sensed a great connection to generations of Jews linked to the city. … We stood there tearful, excited and committed to protecting Jerusalem, the Temple Mount and the Western Wall,” he said. In the first years, we used to celebrate Jerusalem Day in the streets. No longer. From “the city of peace,” to quote Netanyahu, Jerusalem is turning into the capital of racism. The so-called united city is a record holder in discrimination and division.

Few venues symbolize this as well as the one Netanyahu chooses to deliver his “unification” speeches. It’s hard to find a climate less tolerant of the other, including toward Jews who believe that all people are equal and that Palestinians, too, deserve to lead a dignified life. On Sunday, Netanyahu sat next to Rabbi Dov Lior, who has called for the "cleansing" of Arab citizens from Israel. His remarks won applause from the celebrating yeshiva students. The appropriation of Jerusalem and of its festive day by these circles excludes peace- and equality-loving Israelis. In addition, the 73,000 children who attend ultra-Orthodox kindergartens and schools in the city (75% of the city’s Jewish schoolchildren) do not identify with this “Zionist festival.”

My family members and friends, some of whom were born and raised in Jerusalem, avoid the Jerusalem Day festivities. The television scenes of enthused revelers dancing with Israeli flags through the heart of the Old City’s Muslim Quarter, a habit they have picked up in recent years, make them feel alienated and ashamed. Hundreds of police are deployed in the narrow alleyways to protect the thousands of Palestinian residents shuttered in their homes and the merchants who are forced to lock up their stores. That morning, the Supreme Court rejected a petition by human rights organizations seeking to divert the parade route from the Muslim Quarter. There’s little doubt about the prospects of Palestinians being allowed to dance around the Old City, not to mention the city’s western neighborhoods, waving Palestinian flags to protest Israel’s occupation.

Netanyahu is not helping to resolve the conflict in Jerusalem, but he is not to blame for the problem. The root of this evil can be found in the chorus of “Jerusalem of Gold,” a song that has been elevated to the status of a virtual national anthem:

“How the cisterns have dried up, the marketplace is empty and no one frequents the Temple Mount in the Old City,” lamented the late lyricist and songwriter Naomi Shemer.

These lyrics, written several weeks before the 1967 Six-Day War, show erasure of the Palestinians from the collective consciousness of Israelis. To this day, teachers tell their students about Jerusalem’s “liberation” from its Arab conquerors and sing along with them, with great pathos, the updated version of Shemer’s song with the stanza added after the war:

We have returned to the water cisterns, the market and the square, a shofar trumpets on the Temple Mount, in the Old City.

When the battles and revelry died down, the “liberators” realized to their great dismay that the marketplace in the eastern part of the city was not empty and that its Palestinian residents insist on staying there and sabotaging the Judaization of Jerusalem. They also continued to visit the Temple Mount, which they continued to call “Haram al-Sharif.” But tearing down the walls and barbed wire fences that separated east from west Jerusalem before 1967 and unilaterally annexing Palestinian neighborhoods and villages is not enough to truly unite the two sides of the city. In any other “united” metropolitan area in an enlightened country, all denizens — regardless of their religion, race and nationality — generally enjoy the same basic human rights such as housing, education, welfare and infrastructure. But if the Palestinians were to enjoy the same rights as Jews, they would have no reason to emigrate and leave the city to its Jewish residents.

What’s to be done? Once a year, on Jerusalem Day, deliver a fiery speech about “united Jerusalem.” The next day, keep advancing your policy of a divided and conflicted Jerusalem. From a glance at the annual 2016 report of the Jerusalem Institute for Israel Studies:

This combination of deprivation and neglect, lack of hope for a solution and religious and nationalistic radicalization have turned the Palestinian neighborhoods into border zones. Government ministers who proudly proclaim the slogan “united Jerusalem, Israel’s eternal capital” dare not step into these neighborhoods without an armed escort. The current uprising has resulted in a 17% drop in hotel stays by foreign and Israeli tourists in West Jerusalem in February 2016 compared with February 2014. The Tel Aviv-Jerusalem highway is congested in the mornings with the cars of government officials who moved out of the city and drive there for work.

Thus, as Israel nears the 50th anniversary of its conquest or liberation of Jerusalem, the “city that was joined together” has united only religious zealots, warmongers and cynical politicians. The Western Wall has become a bone of contention among Jews and the Temple Mount a volcano with both Jewish and Muslim zealots wrestling each other at its mouth.