After demanding Israeli police withdraw from the Temple Mount compound, Hamas fired this evening several rockets at Jerusalem and at Israeli communities in the south. 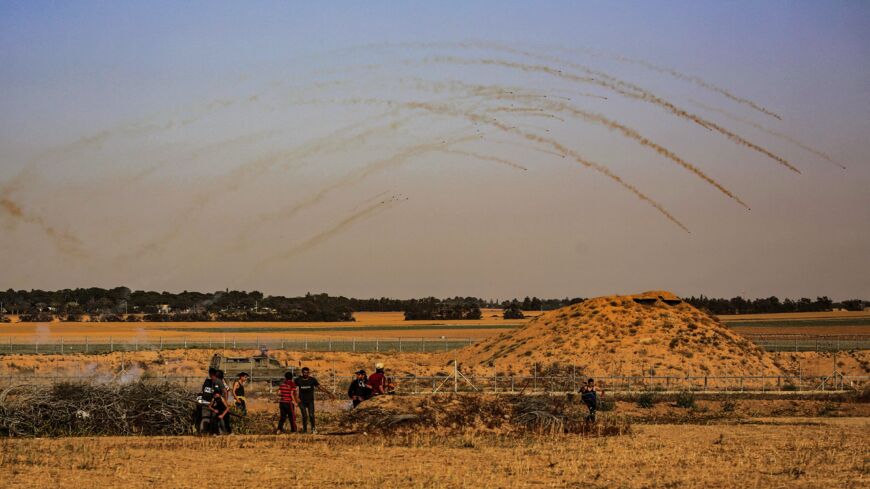 Israeli security forces fire tear gas at Palestinian protesters along the Israel-Gaza border, east of Khan Yunis town in the southern Gaza Strip on May 8, 2021. Israel braced for more protests after clashes at Jerusalem's flashpoint Al-Aqsa Mosque compound wounded more than 200 people and as the international community urged calm after days of escalating violence. The clashes came as tensions have soared over Israeli restrictions on access to parts of the Old City during Ramadan and the threat of eviction hanging over four Palestinian families in east Jerusalem to make way for Jewish settlers. - SAID KHATIB/AFP via Getty Images)

Seven rockets were fired at Jerusalem and more rockets at other communities in Israel this evening, right after the ultimatum issued by Hamas expired. The Gaza-ruling group had warned earlier in the day that Israel must withdraw its security forces from the Temple Mount compound and from the east Jerusalem Sheikh Jarrah neighborhood, or else it would retaliate. Both locations, together with the Old City’s Damascus Gate, have become in recent days flashpoints for violence and confrontation.

Sirens warning over rocket fire sounded this evening in Jerusalem and its environs; in the town of Beit Shemesh, not far from Jerusalem; in the southern towns of Ashkelon, Ashdod and Sderot; and in the villages near the border with Gaza. Knesset members were evacuated from the parliament’s plenum when sirens sounded in Jerusalem. Some air traffic was rerouted. One house in the village of Bein Nekufa near Jerusalem was damaged, but so far there are no reports of injuries. Authorities have ordered schools within a radius of 40 kilometers from the Israel-Gaza border to shut down tomorrow, and several roads in the region near the border with Gaza are now blocked for traffic.

The rocket fire from Gaza comes as tension in Jerusalem reaches heights. This morning, police clashed with thousands of Palestinian worshipers who had gathered at the Temple Mount compound during the night. When entering the compound, worshipers attacked the police with rocks, bottles and other makeshift weapons. News sites reported on Palestinian residents at Sheikh Jarrah and near the Damascus Gate celebrating the rockets on Jerusalem.

This morning, police said it would maintain the original route approved for the Jerusalem dance-flag march organized by Jewish religious nationalists every year. The march celebrates Jerusalem Day, which marks the unification of the city after the 1967 Six-Day War. Palestinians perceive this annual march as a provocation, as thousands of marchers stride through the Muslim quarter in the Old City with Israeli flags and songs, onto the Western Wall plaza.

Police Commissioner Kobi Shabtai said this afternoon to the press, "Warnings about shooting, we get them all the time. We will continue enabling freedom of religious practice in Jerusalem for all religions. The decision not to pass through the Damascus Gate was taken for operational reasons." The march was suspended for a while when sirens sounded in Jerusalem.

Israel now prepares for several days of escalation. The Israel Defense Forces spokesperson told Israel’s public broadcaster Kan that Hamas will feel the extent of the IDF’s might. "Reaction will be sharp and will not last minutes but days," he noted. The IDF retaliated this evening, firing at several Hamas targets. Reportedly, the security Cabinet that convened this afternoon authorized the army to retaliate with airstrikes only. The army also said it was sending reinforcements to the Gaza Division.

The UN Security Council is set to meet on Jerusalem violence this evening. Reports say the Biden administration had urged Israel yesterday to change the route of the march and try to calm tensions, but that Israeli officials have argued the administration shouldn't intervene over the recent escalation in violence. France voiced today concern over escalating violence in Jerusalem. The French Foreign Ministry condemned Gaza rocket fire but also expressed deep concerns over the intention to evacuate Palestinian residents of Sheikh Jarrah out of their homes. For the moment, official Israel did not react to this statement.