Violent clashes between Israeli police and Palestinian protesters at Temple Mount, or Haram-esh-Sherif, as clashes spread. 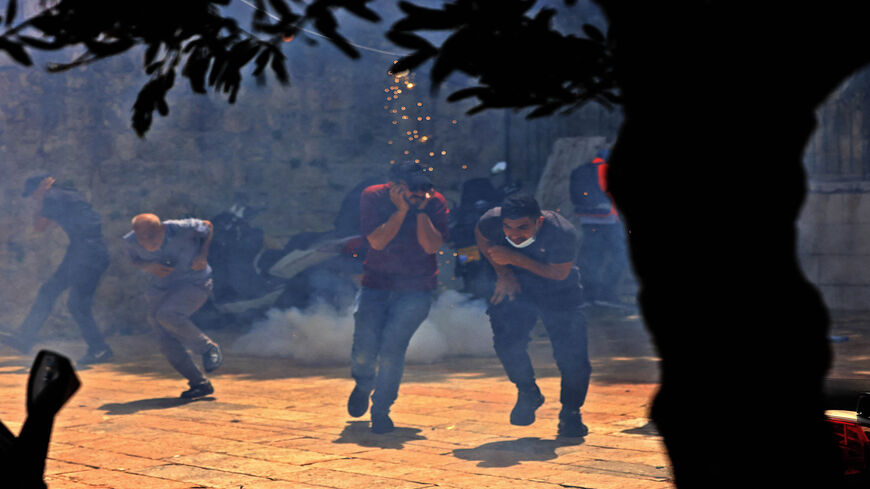 Palestinians run for cover from tear gas fired by Israeli security forces in the Old City, ahead of a planned march to commemorate Israel's takeover of Jerusalem in the 1967 Six-Day War, Jerusalem, May 10, 2021. - Emmanuel Dunand/AFP via Getty Images

Violent clashes broke out this morning at the Temple Mount compound between thousands of Palestinian worshippers and Jerusalem police forces. Reportedly, the worshippers had stayed there overnight, accumulating rocks, bottles and other makeshift objects to be thrown at the police. Some of them tried blocking doors and entrances with piles of stones. Violence started when dozens of rioters hurled rocks at a police station in the compound and threw stones at police officers advancing toward the site on the lower south path. Upon entering the compound, police officers were attacked by rocks and bottles, responding with stun grenades. The Palestinian Red Crescent claims some 200 worshippers were injured, with 50 people taken to the hospital.

In parallel, police decided this morning to ban the ascension of Jews to the site throughout the day, to avoid further escalation. A statement issued by the police said, “After a security assessment that concluded a short while ago … the police commissioner [Kobi Shabtai] decided at this stage not to hold visits [of Jews] within the Temple Mount.” The statement also said thousands of police officers had been deployed throughout Jerusalem and its Old City since early this morning to secure the events and to protect the public’s safety.

Israel Police spokesman Commander Eli Levi said this morning police were confronted with some 8,000 rioters, who severely violated order at the site, exploiting efforts by the police commissioner in the past three weeks to enable Jews, Christians and Muslims' continued freedom of religious practice despite tensions.

The Temple Mount — or Haram al-Sharif in Arabic — is the holiest site for Jews and the third-holiest site for Muslims. It has been considered a flashpoint and volatile spot for decades. For several years now, Jews are allowed to visit the site during certain hours on weekdays, and under numerous restrictions, but they are not allowed to pray there.

On the backdrop of tensions in the city in recent weeks, Jews have been barred lately partially from entering the site — a decision criticized by right-wing legislators. The decision of this morning drew even more political fire, as Israel celebrates Jerusalem Day today, commemorating the unification of the city after the 1967 Six-Day War.

Yamina party Knesset member Matan Kahana tweeted this morning that on his way to the site he discovered entry for Jews has been banned. Kahana wrote, “[The site] should be a safe place open to Jews and members of all religions.” Far-right nationalist activist and Knesset member Itamar Ben Gvir said that “violence and thuggery have scored a victory,” placing the blame on Prime Minister Benjamin Netanyahu and Public Security Minister Amir Ohana. He also said he will not vote with the ruling Likud party on any laws or decrees this week in protest.

Police had given the go-ahead to the traditional Flag Dance parade, which takes place annually on Jerusalem Day and is organized by Jewish religious nationalists. The march usually draws tens of thousands of participants, proceeding into the Old City via the Damascus Gate and on through the Jerusalem Muslim Quarter all the way to the Western Wall. The event this year is expected to start this afternoon, with the parade reaching the Western Wall Plaza later in the evening. After deliberations, and despite spiraling tensions, the police decided to maintain the original Flag Dance march route.

Tensions have risen in Jerusalem since the beginning of the month of Ramadan, especially in the environs of the Damascus Gate, where Jews and Arabs have clashed with police forces. Tensions were later exasperated over the possibility of Palestinian residents of the East Jerusalem Sheikh Jarrah neighborhood getting evicted from their homes. The court had ordered their eviction a few months ago, after right-wing groups claimed ownership on lands and buildings there. The court had discussed this week a petition against the eviction orders.

Clashes between Israeli Arabs and police broke out yesterday in several locations across Israel, including Jerusalem, Haifa and Nazareth, as demonstrators protested police actions and policies of the government in Jerusalem.