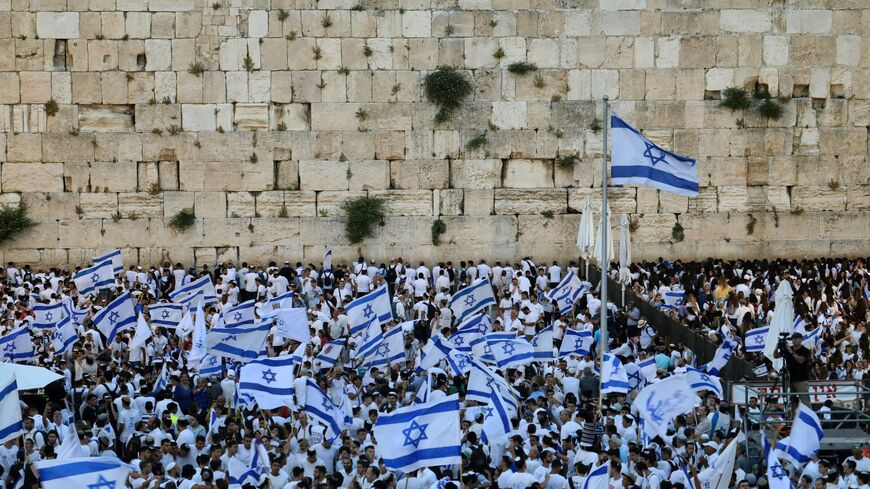 Demonstrators gather with Israeli flags at the Western Wall in the old city of Jerusalem on May 29, 2022, during the Israeli flag march to mark Jerusalem Day. - GIL COHEN-MAGEN/AFP via Getty Images

Prime Minister Naftali Bennett has gotten used to being the target of vicious political attacks over the last year, especially when the attacks come from right-wing and ultra-Orthodox Knesset members. Surprisingly, those same legislators praised him yesterday for refusing to cancel the annual “Jerusalem Day flag parade” despite threats from Hamas and Hezbollah to set the city on fire if the parade took place.

Ever since Jerusalem was reunited 55 years ago in the 1967 Six-Day War, the historic event has been celebrated with thousands of participants marching through the city with flags. Their final destination is the Western Wall, for an evening of singing and dancing and, of course, the raising of Israeli flags. Most of the participants align with the Israeli right, particularly with the religious nationalist sector.

For decades, this annual parade to mark the reunification of the city took place with only minor incidents. That all changed last year. Hamas was able to establish a link between Jerusalem and Gaza. It threatened to fire missiles at Jerusalem if the parade took place, and it carried through with that threat. It was the opening salvo of Operation Guardian of the Walls in Gaza and a series of riots in Israel’s mixed, Arab-Jewish cities.

It happened during the final days of Benjamin Netanyahu’s long tenure as prime minister. On this particular occasion, he took the advice of the security forces and gave orders to stop the parade. This year, as Jerusalem Day approached, the government debated whether the parade should be allowed to take place. The situation in Jerusalem was already tense, and there had been a wave of terrorist attacks over the past few months (although it seems to have died down).

Another consideration was the particular makeup of the current coalition, which includes an Arab party and members of Knesset from the left. They expressed their opposition to the parade, saying that it would end up being an act of provocation.

Seniors in the defense establishment and members of the political right took the position that the parade should take place. They argued that succumbing to pressure from Hamas could damage Israel’s ability to act as a deterrent. Prime Minister Bennett and Minister of Public Security Omer Bar Lev adopted this position while preparing an appropriate response if the parade led to violence in the region.

Enormous police forces were deployed to Jerusalem over the last week to secure the flag parade. Tension has been high in Jerusalem since Ramadan, especially on the Temple Mount. The mood is volatile, and the overwhelming fear is that even an isolated incident could lead to an escalation of violence.

It was a test for the current government too. The right has accused it incessantly of being weak in terms of defense because it formed a coalition with a non-Zionist party. They claim that Muslim Raam prevents the government from efficiently fighting against terrorism.

Most of all, however, it was a test for Bennett, who went from being the darling of the right to persona non grata in that camp. Had he canceled the parade, it would have proved what people say about him: He is weak, and he succumbs to every threat. The fact is that he didn’t even blink. Marchers filled the streets of Jerusalem yesterday afternoon, and the parade took place as planned.

It is now estimated that some 50,000 people came to Jerusalem to celebrate. One of them was opposition leader Benjamin Netanyahu, who arrived at the Western Wall in the morning and made a show of waving the Israeli flag. Before going to the Western Wall, he participated in the launch of the Knesset’s Jerusalem Lobby, during which he attacked the government: “The current government includes members who don’t think we should raise the Israeli flag here in the heart of Jerusalem. A minister in this government said that the parade of Israeli flags in Jerusalem was an act of provocation.” Netanyahu was referring to Minister of the Environment Tamar Zandberg of Meretz, who said in an interview that, “The fact is, the flag parade puts the lives of Israelis and Palestinians at risk. We are all its victims.”

All in all, Jerusalem Day and the flag parade were relatively quiet events, though there were clashes between the police and Muslim worshippers on the Temple Mount and between right-wing demonstrators and Arab residents of East Jerusalem.

There were a few incidents apparently intended to provoke the people who came to celebrate. These included a glider that flew above the crowds with a Palestinian flag. The glider was eventually shot down by the police, given concerns that it posed a threat to participants in the parade.

On the other side of the divide, right-wing activists attacked East Jerusalem Arabs and chanted “Death to the Arabs!”

While tens of thousands of people celebrated the day at the Western Wall, there were clashes in neighborhoods that were not on the parade’s route. Two Jewish buses were caught by accident in the Issawiya neighborhood of East Jerusalem. Both buses were pelted with rocks, and one was set on fire.

Given these events, Bennett ordered the security forces to show zero tolerance to provocations and acts of violence by extremists.

By evening, the government could sigh in relief. Hamas did not fire rockets at Israel, and the police were able to restore control during the various clashes and disturbances. When it was over, Bennett said that “Jerusalem was filled today with people who came to celebrate. We decided that the parade of flags would follow its traditional route, and that is what happened. We broke records this year, with 50,000 people filling our city with the colors off our flag. It was a very happy and moving event to see the entire Jewish people celebrate together.”

It seems now as if Jerusalem passed in relative quiet, even if tensions in the capital are still high. The war of flags in East Jerusalem, between Palestinians waving their flags and Jews waving theirs, is expected to continue. These incidents pose a challenge to the coalition, which is divided between Raam and Meretz, who see no problem with Palestinians raising their flag and right-wing parties who demand that flying the Palestinian flag be banned by law.

These differences were apparent in the May 29 meeting of the Ministerial Committee on legislation, which granted coalition members the right to vote their conscience on a law proposed by Knesset member Eli Cohen of Likud, which would ban raising flags of enemy states, including the Palestinian Authority, in institutions funded by the state, including universities.

Cohen’s proposal, which was discussed on Jerusalem Day, was intended to embarrass the coalition. Two ministers voted against it: Minister of the Environment Tamar Zandberg of Meretz and Minister Nahman Shai of the Labor Party. The decision to allow them to vote their conscience on this was exceptional.

It seems as if this year the flag parade was not only a source of conflict between Jews and Arabs, but it turned into a political battlefield between the right-wing parties in the opposition and the ruling coalition.