Right-wing Knesset members are advancing a bill that would prevent universities and other state-funded institutions from flying the Palestinian flag. 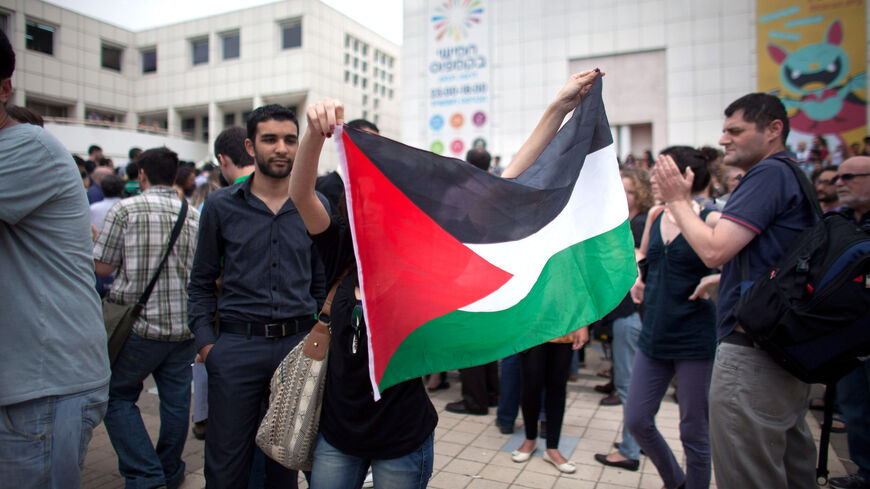 The Knesset approved on June 1 the initial reading of a bill by Knesset member Eli Cohen of the Likud that would ban organizations and institutions budgeted for or supported by the state from flying the Palestinian flag. Included among those bodies are all of the country’s public universities.

Although the bill was first proposed by the opposition, it passed with 63 votes in favor and only 16 votes opposed. Prime Minister Naftali Bennett as well as the members of his Yamina party, Yisrael Beitenu and New Hope — all members of the coalition — voted together with the opposition, having been granted the right to vote their conscience. The only people to oppose the bill were the members of left-wing Meretz and Muslim Ra’am from the coalition, and the Arab Joint List from the opposition. Members of the Blue and White and Labor parties absented themselves for the vote, as did most members of Yesh Atid. Only Knesset speaker Mickey Levy of Yesh Atid was in the plenum at the time of the vote, and he voted in favor of the bill.

The decision to allow members of the coalition to vote their conscience was made May 29 during a meeting of the Ministerial Committee for Constitutional Affairs. Only two ministers voted against the proposal for free vote: Environment Protection Minister Tamar Zandberg of Meretz, and Minister of Diaspora Affairs Nachman Shai of the Labor Party. The fact that the coalition reached such an unusual decision is further evidence of the strong desire of some of the coalition’s right-wing flank to advance the aforementioned legislation.

A ruckus erupted in the Knesset plenum June 1 between Knesset member Eli Cohen of the Likud who proposed the bill and members of the Joint List who kept interrupting him. He responded by citing former Prime Minister Yitzhak Shamir, saying, “The Arabs are the same old Arabs, just as the sea is the same old sea.” Then, addressing the Arab members of Knesset specifically, he added, “You’ll never change.”

Opposition chair Benjamin Netanyahu jumped at the opportunity to congratulate the Knesset for its vote. In a video he posted to social media, he said, “The flag won today. Just a few minutes ago, we passed the Flag Law proposed by Knesset member Eli Cohen with a resounding majority. This is an important day for the State of Israel and the Jewish state.” One can only wonder why he did nothing to advance similar legislation during his long term in office.

Beersheba Mayor Rubik Danilovich sent a letter to the president of Ben Gurion University, writing that he was ashamed to see “Palestinian flags waved proudly. Ben Gurion University is part of the city of Beersheba and the State of Israel. It should not show weakness, and it must not agree to this. You must speak out clearly about this. The State of Israel has just one flag and no other. What happened to the days in which the university banned political activity, especially an outspoken and defiant demonstration against the State of Israel? Another red line has been crossed today. Our leadership must be given a clear voice, without stuttering. I must tell you that I am ashamed.”

Education Minister Yifat Sasha-Biton also expressed her outrage, stating that the images from Ben Gurion University are unacceptable. She then turned to Twitter, writing, “The images we saw this morning from Ben Gurion University in Beersheba are unacceptable. As part of the regular assessment we conduct together with the Authority for Higher Education’s legal department regarding students participating in acts of incitement, violence or attacks on the nation’s symbols, we will look into these events to see whether they fall under these parameters.”

The president of Ben Gurion University, professor Daniel Chamovitz, has been given a security detail due to concerns that he could be hurt as a result of the personal attacks against him on social media. Addressing a meeting of the Knesset’s Education Committee, he said, “I understand how the Palestinian flag is seen as a threat by some Jews. I realize that and it pains me too, but it is still not violence.” Then he added, “We need to create an island of sanity, an island of coexistence. I promise that my top priority will be to find a way to restore a sense of security. The fact is that there are no violent attacks and there is no overt racism on campus. The demonstration was over in an hour without any violence.”

Jiwara Bader, head of the Hadash party student group on campus and an organizer of the demonstration, told Kan Radio, “We waved the flag to mark Nakba Day and the fact that the Palestinian people were expelled from their homes, that there is no peace and there are no two states. Marking this should not be seen as a threat to the State of Israel.”

Solafa Makhul, a student at Tel Aviv University who addressed the Nakba Day ceremony there last month, also tried to explain the use of the Palestinian flag. She told Kan News, “It is only natural that as far as we are concerned, the Palestinian flag is a way to express our identity. When I raise the flag, I am actually saying who I am. That flag represents the Palestinian people, whoever they are. Proof that it does not pose a threat to the Jews or to any specific group for that matter is that many of our Jewish friends were there with us at the Nakba Day commemoration. Jewish lecturers were there too. They stood beside us and raised the flag with us.”