Struggle of Negev region against layoffs

The well-connected employees of Israel Chemicals have succeeded in making waves against a layoff plan, but there's little correlation between their struggle and the socio-economic problems of the Negev residents. 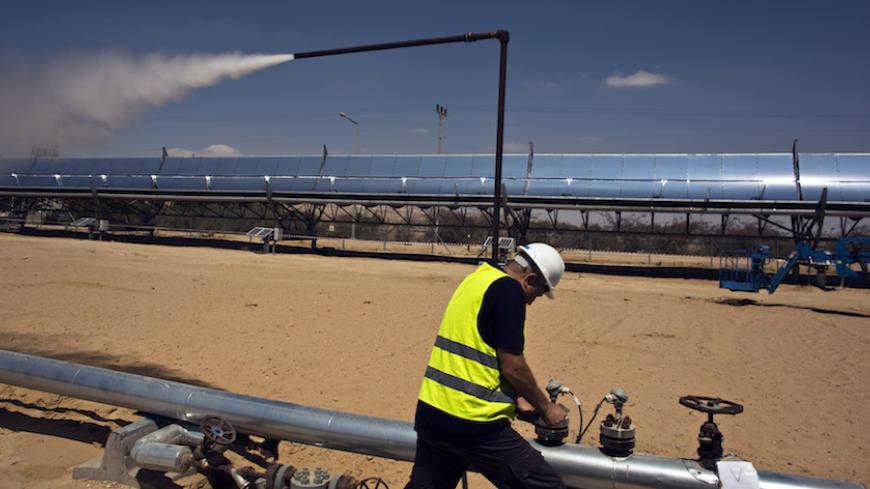 A worker releases steam at the research site of a solar power company in Israel's Negev desert, near the town of Dimona, Sept. 9, 2014. - REUTERS/Nir Elias

The Worker’s Committee of Israel Chemicals (ICL) attempted to transform their struggle to prevent 140 layoffs into a mass struggle of all Negev residents. They succeeded only partially. True, the southern town of Dimona (home to many ICL workers) came to a halt the morning of May 17 and a demonstration was held. But only about 1,500 people attended the rally, most of whom were ICL’s organized employees and their families. These were reinforced by the appearance of dozens of politicians from the opposition. including all the members of the Zionist Camp, Knesset members of Yisrael Beitenu (except for party Chairman Avigdor Liberman) and the Meretz Knesset members.

Politicians streamed in to the Negev and there was broad media coverage of the strike, which included live broadcasts of TV stations, open studios that were erected in Dimona and newspaper headlines. All these attempted to create the perception of an authentic mass protest. The fact that the protest took place so soon after the March 17 elections and the May 14 swearing-in of the new government all contributed to the atmosphere of urgency.

Thus, for example, Zionist Camp leader Isaac Herzog (who is also chairman of the opposition) delivered a combative speech at the demonstration. He associated the bleak situation of the city’s residents to the fact that most of the inhabitants had voted for the Likud Party in the recent elections. “We’re not in an election campaign now, and I know that many of you did not vote for me," Herzog said. "You voted Likud because you have been Likudniks since the days of [Prime Minister Menachem] Begin, who had been a great man and a great social leader. I am chairman of the opposition and I intend to fight for you and with you for social justice and so that you may live dignified lives — exactly as Begin would have done.”

Thus, Herzog tried to emphasize this contradiction, where most of the residents of the south voted for the Likud, despite the governments headed by Prime Minister Benjamin Netanyahu ignoring this community. As an extension to this, Armand Lankri (chairman of the Dead Sea Works Workers Committee, an ICL subsidiary, and also chairman of Dimona’s Likud branch) announced that he will act on his threat and leave the Likud.

But there was a tremendous gap between reality and the spectacle of a painful mass protest that was created by the confluence of interests of the politicians from the opposition, the strong and well-connected Worker’s Committee and the media. Although Dimona was on strike, including its schools, the streets were not thronged with angry demonstrators. This was not an authentic, sweeping protest of tens of thousands of Negev residents, not even of all the Negev cities. In fact, Beersheba Mayor Rubik Danilovich was conspicuous by his absence. And ironically, he is a member of the Labor Party.

There was a reason for Danilovich’s absence, in spite of attempts to drag him to the protests. Danilovich heads one of the thriving cities in terms of development, education and employment opportunities. He is well aware that recent years have seen great improvements on behalf of the establishment regarding the Negev’s residents. Even though Danilovich is a Labor Party member, he has complimented the prime minister for investing in the Negev, including the decision to transfer Bahadim City — the Israeli army training campus — to the region.

Evidently, Meir Cohen (former Dimona mayor and former welfare minister under Yesh Atid) felt much the same way. Cohen was interviewed by Channel 2 TV the night of May 17 and was visibly uncomfortable when asked about the city’s condition. Cohen, who still lives in Dimona, is viewed as having been an excellent mayor who succeeded in leading Dimona to achievements in the domains of education, social solidarity, the city’s image and cohesiveness. Thus, while Cohen identifies with the struggle of ICL workers, he wanted to emphasize that Dimona is an excellent, strong city. He feels that it would be a shame to ruin its public image by painting it as a weak, needy city after so much effort has been invested in improving its image. According to Cohen, the problem lies in long-term planning of employment anchor opportunities in the Negev — namely, a policy encouraging drawing to the southern region mass-employment plants.

According to data published in the Israeli Globes economic newspaper, the average salary of 850 employees of Bromine Compounds (ICL subsidiary) is 39,400 shekels (about $10,000) a month — four times the national average. Most of the Negev residents earn, at best, a quarter of this amount, or at worst they sit at home and cannot really identify with this labor struggle. Many of the Negev’s laborers can only dream about the retirement terms offered to laid-off ICL workers.

The battle of ICL workers is a battle of strong, well-connected employees who succeed in making waves because of their political power and media connections. Many Negev residents, and even many Tel Aviv residents, would be happy to change places with them. Like any powerful worker’s committee, the ICL committee has a strong foothold in the government’s parties. When the Kadima Party was formed, some of the workers left the Likud and cast their votes for the new party.

So it's not surprising that the ICL workers’ struggles, which began a month before the elections (following the intentions of management to take efficiency measures and lay off 140 workers) had no effect on the election results. There is simply no connection between this struggle and the socio-economic problems of the state as a whole, or of the Negev residents in specific. ICL workers are not the poor unfortunate ones who repeatedly vote for Netanyahu.

But in election season, anything goes. Already during the campaign, Lankri threatened to leave the Likud while other Likud members in ICL defiantly destroyed their Likud Party member identification cards. Already then, Zionist Camp politicians made their way to the Negev and to Dimona to attempt to link the Likud regime to the bad employment situation of Negev residents. But they didn’t succeed. Of the Dimona residents, 41% voted Likud in contrast with 7.8% for the Zionist Camp; this includes ICL workers, of course.

Some 24 hours after the demonstration, an agreement began to coalesce with the ICL Worker’s Committee to minimize the number of layoffs, and all protests were tabled — until the next crisis. The chances that we’ll ever see ICL workers and Lankri displaying solidarity and protesting with other laid-off workers from other concerns are close to zero. Therefore, the struggle of ICL workers should be viewed as a stand-alone struggle that does not exemplify the problems and tribulations of most of the residents of the Israeli south. If anything, under the banner of solidarity, workers and politicians should display the same level of determination in other, no-less-painful protests too. This statement is true, for instance, with regard to the truly painful and authentic struggle of Israelis of Ethiopian extraction, which is expected to be renewed this week. The test of the Knesset members would be attending this event as well.