The low voting rate in local elections testifies that two years after the social justice protest movement, the Israeli public no longer believes in its power to influence and change their municipalities. 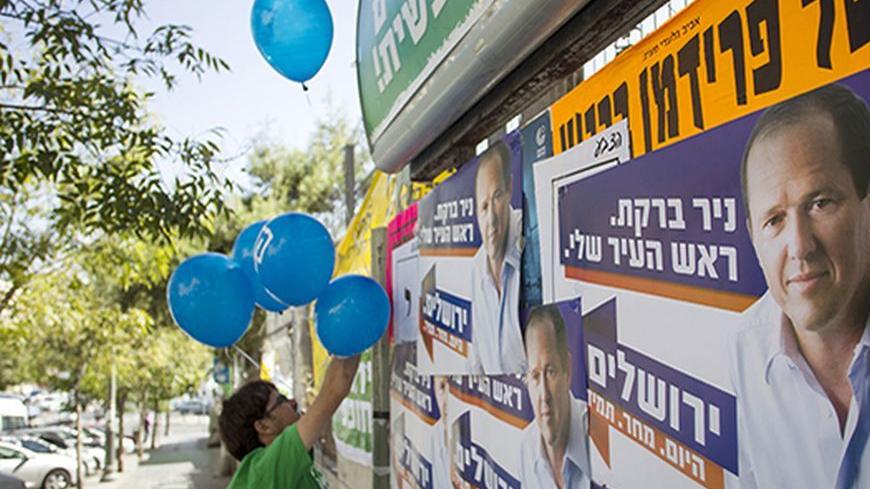 Only half of the Israeli public voted yesterday, Oct. 22, in the local municipal elections. More than any specific candidate, the real winners were apathy and corruption. It was a no-confidence vote in local authority as an entity that can influence the life of the Israeli citizen.

The election data was most depressing in the large cities headed by Tel Aviv and Jerusalem; even fewer people voted there when compared with the previous elections of 2008. The intriguing battle in Jerusalem between incumbent Mayor Nir Barkat (who was re-elected) and Moshe Leon, the candidate of Knesset members Avigdor Liberman and Aryeh Deri, did not prod the city residents enough to leave their homes for the ballot boxes. Only 36% voted this time, in contrast with 43% in Jerusalem’s last round.

Tel Aviv — the city that led the state’s largest social protest movement about two years ago when it “hosted” giant demonstrations involving hundreds of thousands of citizens from all over the country — registered especially meager voting statistics. The incumbent veteran Mayor Ron Huldai prevailed over Meretz candidate Knesset member Nitzan Horowitz. Only 31% of the city’s population voted, compared with 36% in the previous election.

Huldai is perceived as a much-esteemed mayor who gets high marks for his running of the city. But the election percentages show that most of the Tel Aviv residents no longer believe in their ability to make a difference or, worse, they don’t understand the effect of local government on the quality of their lives and the education of their children. True, a city mayor —­ even the mayor of a rich city such as Tel Aviv — cannot affect the price of cottage cheese or of housing. However, he can view his public role and mission through a social-justice perspective; he can direct municipal resources to the weak and improve the municipal educational system.

Yes, this is the city that produced Daphni Leef and Knesset member Stav Shafir, the tent-protest on Rothschild Boulevard and the giant demonstrations in Kikar Hamedina city square. But what will all the supporters of that social-protest movement from all over the country say today about the Tel Aviv voters who demonstrated mainly apathy this week? In contrast with all expectations, the social protest led to almost no significant changes in local government. Nine months ago, Israeli citizens almost exchanged their prime minister in general elections because of the high cost of living and hardships related to education and housing. Yet now, they expressed their inertia and lack of faith in their ability to make changes in their immediate vicinity.

The low voting percentages and election results prove that when it comes to local leadership, the Israelis prefer the familiar and time-worn. They do not believe enough in change in order to devote a half-hour of their time once every five years to vote in elections, they are not aware of the influence wielded by local authorities over them and they do not understand the importance of voting in a democratic system.

It was also disappointing to see how the three mayors who were disqualified by the High Court of Justice from serving at their posts in the recent weeks, due to suspicions or corruption indictments, were easily elected to another term of office. It is bad enough that the [infamous] group of three — Bat Yam's Shlomo Lahiani, Upper Nazareth's Shimon Gapso and Ramat Hasharon's Yitzhak Rochberger — had the insolence to run for re-election and did not even reconsider their candidacies. But what does it say about us as a society if we re-elect them? What does it say about the residents of those cities who voted for them or those who may have recoiled from them, but chose to sit at home instead of voting against them?

No wonder that for years local government has not served as a natural internship habitat for leadership on the national level. Instead, local government suffers from a poor image and is considered a corrupt, wheeler-dealer venue. True, there are mayors who could benefit the national political stage, but they are the minority: Huldai, Barkat, former Knesset member Ze’ev Bielski, who returned to head the Ra’anana municipality, Ruvik Danilovich from Beersheba and Michael Biton from Yerucham. These represent only a drop in the bucket of local governments that are mediocre at best, and corrupt at worst. Between 50 and 60 mayors are in the midst of various stages of criminal proceedings — a critical mass that tarnishes the image of local government as a whole.

It was not always this way. In the 1970s and 1980s, local government succeeded in producing young, talented leadership, mainly in the development towns in the periphery. These leaders changed the face of local government, led it to achievements, represented an organized power group vis-à-vis the central government and served as a leadership reserve for national politics.

Mainly, these were the Sephardic (Oriental) Likud Party mayors, the most prominent of whom were David Levy from Beit Shean, Shaul Amor from Migdal Ha’emek, Meir Sheetrit from Yavne, and Amir Peretz from Sderot. At different time periods, all of these mayors led their cities to large, significant achievements, mainly by putting them on the map regarding education and industry. Eventually they became ministers and were the ambassadors of their cities to the Knesset and the government. None of them got into trouble with the law and were not suspected of bribe-taking. I was born in Migdal Haemek when it was a development town, I was a child when Amor was elected mayor and I vividly remember the industrial momentum he succeeded in bringing to the northern town that became a city in his era. I recall the excellent educational system that was built in his time, the fine teachers he recruited himself and his real concern for our education even when we were older — he obtained scholarships for university students and filled us with esprit de corps.

This spark of local, authentic leadership, full of vision, creativity and fighting spirit has disappeared today in shallow politics tainted with the corruption of ''the work roster.''