Women, young people and leaders of the social protest movement are expected to increase their power in the Israeli municipal elections in October. 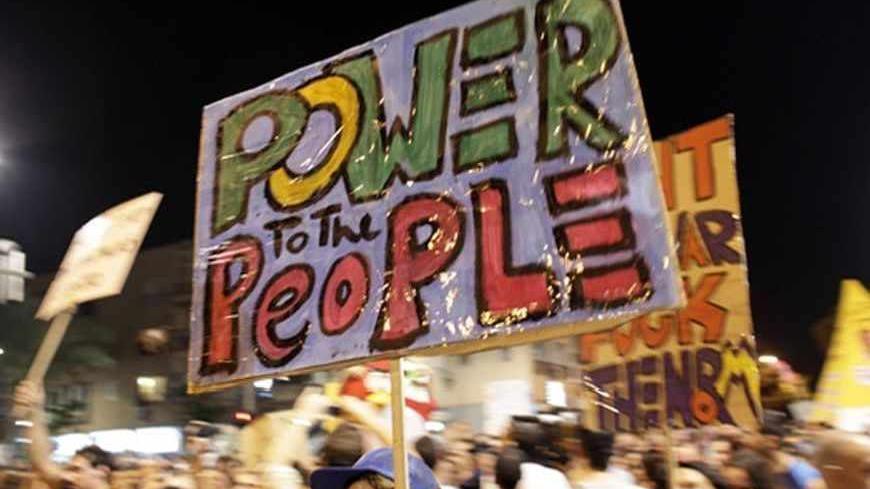 A man holds a sign during a demonstration calling for lower living costs and social justice in Tel Aviv, Sept. 3, 2011. - REUTERS/Darren Whiteside

Yossi Yonah — one of the prominent figures in the leadership of the Israeli social protest movement — recently received an offer from the head of the Labor Party and Knesset member Shelly Yachimovich to head the party’s list for the Tel Aviv municipality council, in the elections which will be held at the end of October.

Yachimovich well understands the great potential of the upcoming municipal elections, exactly as does Yesh Atid Party Chairman and Finance Minister Yair Lapid and HaBayit HaYehudi Chairman and Economy and Trade Minister Naftali Bennett — both of whom head parties identified with the social protest. That is the reason that Yachimovich appealed to Yonah, in her efforts to recruit popular social protest personalities to run on the Labor list for positions in the city councils.

The Labor, Yesh Atid and HaBayit HaYehudi parties all have one thing in common: Over the last two months, they have invested much effort and many resources in the search for local "protest heroes." Then, they offer these people the opportunity to run on their party ticket for heads of municipalities or members of city councils. Local election campaigns have not been this sizzling in years. Today, the election candidate scene is teeming with young people and women who have been leveraged by the blast waves of the new politics generated by the protest movement — and not by party hacks who are rooted in traditional party politics.

Young forces such as Lapid and Bennett have risen to power and serve as high-level ministers; other young leaders of the protest movement have also become new Knesset members. This may be tipping us off that the recent Knesset election results will dramatically affect the future of local politics as well. From one day to the next, the municipal arena is becoming the next hottest place in politics. The trend involves young people, women and figures identified by social protest.

The significance of all this is that on the night of Oct. 22, 2013, after the votes are counted, a tremendous change will take place in the human structure of the familiar male political local authority. The parties report on great involvement on the parts of residents living in the peripheral communities and in the large cities from which the huge masses of demonstrators hailed two years ago. This is a public that, ever since the protest, has undergone an accelerated maturation process with regard to insisting on its rights, understanding economic processes and mainly in its demand for governmental transparency. This is a public that learned to recognize its ability to exert pressure on the leadership, and now understands that by getting involved in local politics it can directly affect its quality of life, its urban educational system, the quality of its environment and social justice.

Five year ago, when Knesset member Dov Khenin — from the Hadash Party — ran for head of the Tel Aviv municipality on the "City for us all" list ticket and talked about the importance of transferring the city’s contract workers to direct employment, most of the Tel Aviv residents did not understand what he was talking about. In the current campaign, this was one of the first election statements of Knesset member Nitzan Horowitz, mayoral candidate for the Meretz Party. Horowitz brings a pronounced socio-economic agenda — in the spirit of the protest — to the election race. While Horowitz faces a difficult battle against the incumbent, esteemed mayor Ron Huldai from the Labor Party, Horowitz has already succeeded in challenging Huldai and appearing as a new, fresh alternative to the veteran mayor.

One of the exciting expressions of the protest movement effect on local government is the large number of women running for mayor and membership in city councils. Today, women have very limited power in the city councils that are controlled by male political coalitions. The numbers speak for themselves: out of 256 mayors, only five are women. Out of about 3,000 city council members, only 350 are women. This under-representation shouts to the high heavens, precisely because it occurs in an arena in which women can — and should — influence the education of their children, their welfare and the environmental conditions in the city. Among the hundreds of thousands of people who filled the city squares two years ago, there were no less women than men.

Yifat Zamir, CEO of the ''WePower'' women's organization, has been leading an initiative in the last year and a half to prepare women for functions in local government. In fact, she is convinced that we face a feminine revolution in local government. About 37 women compete for the role of mayor, and according to Zamir, “If 10 of them are elected, that will be a tremendous victory.”

In the city of Hod HaSharon, for example, two women are competing for mayor: Sharona Hershko, who was recently demobilized from the Israel Defense Forces with the rank of colonel, and Aviva Gutterman, an independent candidate. They run against incumbent Mayor Hai Adiv and two additional male candidates. In the current city council of Hod HaSharon, there is only one woman out of 15 council members.

Another sign of change in the local arena is Aliza Bloch. Until recently, Bloch was a high school principal in the city of Beit Shemesh, and today she is a mayoral candidate for HaBayit HaYehudi. Bloch’s candidacy — supported by Likud and Yesh Atid — arouses great interest because she is a religious woman who wants to be mayor of a city that seems to have waved the white flag of defeat vis-a-vis the accelerated process of ultra-Orthodoxy overtaking it. In light of her excellent achievements in the school she administered, Bloch has been receiving requests to join politics for years. This time, she acceded to Bennett’s appeal. Polls conducted by the parties showed that despite the city’s ultra-Orthodox trend — or perhaps because of it — the Beit Shemesh residents want change and Bloch’s chances are not bad.

Mazal Mualem is a contributing writer for Al-Monitor and formerly a chief political analyst for Maariv and Haaretz.  She also previously worked for Bamachane, the Israeli army's weekly newspaper.