The secular residents of Beit Shemesh are demanding another round of voting in the recent municipal elections, having lost to the ultra-Orthodox by a narrow margin. 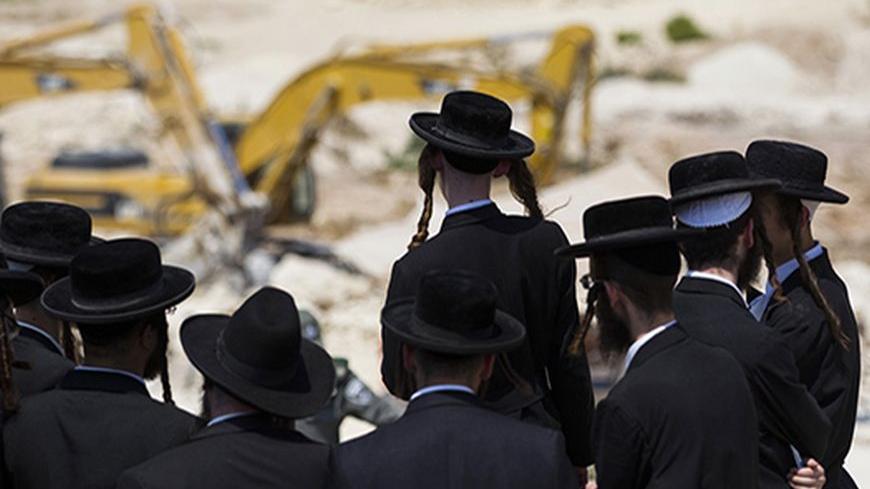 Ultra-Orthodox protesters take part in a demonstration at a construction site in the town of Beit Shemesh, near Jerusalem, Aug. 15, 2013. - REUTERS/Ronen Zvulun

The election campaigns for local authorities brought hope for secular and religious residents of Beit Shemesh that they could finally stop their city’s ultra-Orthodox trend. They joined forces and were convinced they could unseat mayor Moshe Abutbul, a member of the ultra-Orthodox Shas party. According to official results, they lost with a margin of only 956 votes, but they claim that the results were forged and have called for holding another round of elections in the city.

Thus a week after the Oct. 22 elections, it’s as if Beit Shemesh is still in the midst of the campaign. The opposition to Abutbul is leading a series of protests and intends to appeal to the court to nullify the results. Israeli police are investigating suspicions of crimes, and have already revealed dozens of fake ID cards and arrested eight people.

All of Beit Shemesh is immersed in an atmosphere of division and suspicion, torn between extremist ultra-Orthodox groups and secular and moderately religious Jews, locked in a hopeless culture war. Even if the claims of fraud are not substantiated, thousands of secular residents will continue to live with the sense that their city was stolen in this election. This isn’t exactly the atmosphere in which rehabilitation can begin in the town, which has been declining for years, turning poorer and more separatist.

More than 95,000 residents live in Beit Shemesh today, a third of them ultra-Orthodox. The unevenly high birth rate and the positive immigration trend on the part of the ultra-Orthodox are expected to make Beit Shemesh a city with a secular minority within less than a generation. The implications of this process on the quality of life in the city are great: The socio-economic decline will continue, the educational system will become predominantly ultra-Orthodox and the cultural life will change entirely.

Many in the city saw in the local election a last chance to stop on the slippery slope, but the attempt to successfully unite what has been called “the Zionist camp” and to achieve a critical mass of votes at the ballot box failed. This camp, which united around Likud party candidate Eli Cohen and was supported by a broad coalition of parties — Yesh Atid, HaBayit HaYehudi and Labor — did not succeed in convincing its voting public to come out and have its say. As in other cities, in Beit Shemesh, voter turnout was disappointing at only 31%. Tens of thousands of residents, most of them secular, didn’t bother to show up to the polls.

This is why there’s some truth to what Abutbul said about those who doubt his victory. As long as fraud hasn’t been proven — and this is the situation currently — he’s still the elected mayor of Beit Shemesh. Despite the arrests, senior police officials said that as of now, the investigation has not found fraud to the degree that would have changed the results of the election. But this doesn’t change the fact that the other side refuses to accept the result and is planning a mass protest demanding new elections.

I asked Richard Peres, a member of the opposition from the Labor party who is in charge of education in Beit Shemesh, what would happen if the police found no further evidence of fraud.

“I’d be very angry, and would accept it, for lack of another option, but with the knowledge that it’s not the truth,” answered Peres, a resident of the city since 1964, in a response that reflects the general atmosphere in the town. According to him, “Everyone knows there was fraud on a large scale here, that these elections were stolen. That they found falsified ID cards and that there was mobilization of ultra-Orthodox who changed their addresses from Jerusalem and Bnei Barak to Beit Shemesh in order to take over the city.”

“But maybe it’s a lost cause? After all, the secular didn’t turn out to vote,” I challenge Peres. He answered, “It’s actually a big question. When I think about it, I say that we’re to blame. If 17,000 people, most of them secular, didn’t turn out to vote, what does this say? Have they given up? We could have easily won. We were short by only a few hundred votes. But for some reason, it didn’t happen. I say: We’re to blame. But still, this doesn’t change the fact that they stole the election from us.

“I’m not giving up on Beit Shemesh,” he continued, “It’s a fight for our home, and we’ll exhaust all avenues, including the legal. It’s not only our fight, it’s a fight over the future of the country. Beit Shemesh is a microcosm of Israeli society. Look at us — this is what will happen in the rest of the country if we don’t stop it here. There will be an ultra-Orthodox takeover in other places.”

Beit Shemesh is on its way to another round in the fight between its different communities. In any scenario, it seems it won’t be quiet.