The secular residents of Beit Shemesh are preparing for a final battle against ultra-Orthodox inhabitants over the character of the city, reports Daniel Ben Simon. 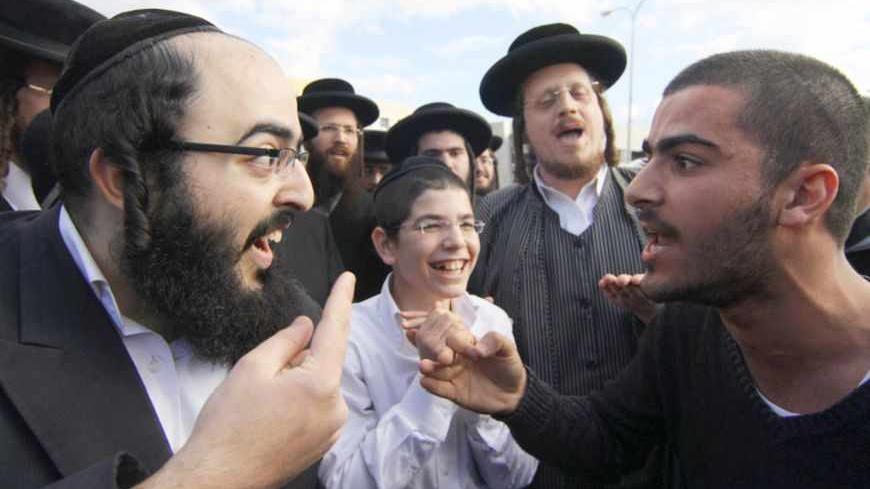 An ultra-Orthodox Jewish man (L) argues with a secular man during a protest against the government's pledge to curb Jewish zealotry in Israel, in Beit Shemesh, near Jerusalem, Dec. 26, 2011. - REUTERS/Oren Nahshon

BEIT SHEMESH, Israel  — The local residents still cannot understand what has come over their city. They wonder how it could be that the tolerant city of new immigrants has become a battle scene between its secular and ultra-Orthodox inhabitants, which is liable to give rise to a crisis that only one of the rivaling sides may survive. Given the current state of affairs, it is already clear to all and sundry that if the ultra-Orthodox influx into the city keeps on at the present rate, it will change the face of Beit Shemesh, and the city will become the largest ultra-Orthodox city in Israel — even larger than Bnei Brak, where the majority of the ultra-Orthodox in Israel are currently concentrated.

A while after that incident, signs were hung at the entrance to the ultra-Orthodox neighborhoods, requiring passersby to wear modest clothing. And as if that was not enough, the ultra-Orthodox residents demanded that in the buses going through their neighborhoods women be seated in the back of the bus, so as to prevent any contact between men and women.

A shopping center that was under construction close to the ultra-Orthodox neighborhoods was time and again vandalized at night by ultra-Orthodox vandals, who tore down walls and smashed windows in an attempt to thwart its opening. The building is now abandoned and deserted. “I am sorry to say that in the bitter battle waged between the secular and the ultra-Orthodox in the city, the ultra-Orthodox have the upper hand,” says Richard Peres, who sits on the city council on behalf of the Labor Party.

“They are united, while we, the secular residents, are divided. If it goes on like this, Beit Shemesh will be lost and its secular residents will have to look for other places to live. It will be impossible to live here anymore.”

It was not always like that. Before the ultra-Orthodox flocked into the city, Beit Shemesh had managed to shake off the image of a failed immigrant town. In the 1980s and 1990s, more than 30,000 immigrants from the United States and the former Soviet Union settled in the city, most of them secular or moderately religious. They planted the seeds of revolution in Beit Shemesh, the like of which the city had not seen since its establishment in 1950.

In its early years, the city had come to be known as a poverty-stricken and forsaken place, situated somewhere between Tel Aviv and Jerusalem. It was seen then as a microcosm that highlighted the resounding failure of the immigrant towns built throughout the country following the arrival of hundreds of thousands of immigrants to Israel immediately after its establishment.

It was a town without a future. Those who could left the place. Those who were lucky enough to acquire education outside the city never returned there. Anyone who had the opportunity hurried to escape it. It all miraculously changed with the arrival of the new, secular residents. In less than a decade, the city population soared from 20,000 to nearly 60,000. “No other city in the country witnessed such an influx of new residents as that recorded in Beit Shemesh,” noted Shalom Fadida, who had served as mayor of Beit Shemesh at the time.

And then, the ultra-Orthodox discovered the place. Almost 40,000 of them settled in the city in the last decade. The beginning was promising. They moved to new neighborhoods built especially for the ultra-Orthodox community and, at first, provoked no opposition on the part of the local secular population.

However, the sense of peace and calm was abruptly shattered once the girl was attacked, and it was further undermined with the exclusion of women from the public space, which was interpreted by the townspeople and the Israeli public at large as an attempt to take control over the city and enforce on it the ultra-Orthodox way of life.

I went to see Shalom Fadida, the man who had opened the gates of the city to the ultra-Orthodox wave. His law firm is still seated in Beit Shemesh, but he had moved with his family to Tel Aviv. I asked him whether, looking back, he did not regret his decision to bring the ultra-Orthodox population to the city. He stared at me, evidently embarrassed by my question. “To tell you the truth,” he said after a few moments, “At the time, I did not imagine that we would get into this situation. Had I known what was going to happen, I would not have allowed them into the city. I would not have let them get close to it.”

He recalled those days when he was faced with the dilemma. “Beit Shemesh is located in the environs of Jerusalem and the ultra-Orthodox were looking for a place nearby to settle in, as close to Jerusalem as possible,” he recounted. “They could not afford to buy apartments in Jerusalem due to the high housing prices there, and they were thus looking for a place close by. Beit Shemesh was just right for them. At the time, there were some cabinet members who exerted heavy pressure on me. I finally approved the establishment of a single ultra-Orthodox neighborhood comprising 1,100 housing units. I told myself that as long as the ultra-Orthodox accounted for only 10% of the local population, they could not adversely affect the social fabric of the city. Had I said ‘no’ I would have been accused of anti-Semitism.”

Fadida misses the Beit Shemesh of days gone by, the neighborly town where people knew each other and where secular and religious inhabitants lived in peace and harmony side by side with each other. “The situation today is impossible,” he added.

“The ultra-Orthodox can no longer be stopped. At this pace, it is not only Beit Shemesh that is liable to fall into their hands. In fact, the entire country may be taken over by the ultra-Orthodox. While we, the secular, are reducing the birth rate, theirs is on the increase. They have 10 children and even 12 and 14 children per family. Where are we headed, then?”

Fadida has a solution to the demographic problem of Beit Shemesh. In anticipation of the mayoral election, slated for October, the secular parties in the city have all joined forces in an attempt to block the strengthening ultra-Orthodox camp. Fadida and many of his allies in the election campaign are calling for the division of the city into two sections — a secular city and an ultra-Orthodox one. It seems that they have realized that they cannot live together.

“There is no choice but to split up,” Richard Peres maintain. He plans to run for the office of mayor, leading the secular bloc. “If, God forbid, the ultra-Orthodox win the upcoming election, then Beit Shemesh will be lost for good. It will be a tragedy for us all. It is like losing your home and your family. For me, Beit Shemesh is home. The day I have to leave it, I’ll feel as if my life is over.”