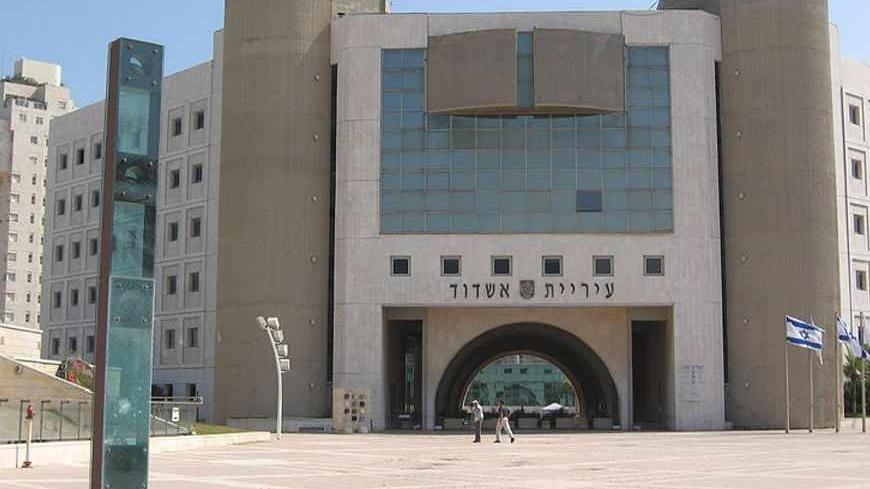 People walk in front of Ashdod's City Hall on May 18, 2007. Many Ashdod residents are unhappy with Finance Minister Yair Lapid's austerity plan. - Shmuliko

ASHDOD, Israel — Wandering this week through the tables of a cafe not far from the grand City Hall, you could pick up one single name mentioned over and over again.

That same name was the talk of the town when I visited Ashdod just before the parliamentary elections in January. However, at the time, Minister of Finance Yair Lapid was seen as a rising star, the savior who was sure to come to the rescue and bail out the state of Israel and, in particular, the growing city of Ashdod. This week, residents of this city on the shore of the Mediterranean were talking about him as if he had contracted the black plague. There was no one left to stand up for his economic policy, in which he recently proposed budget cuts and tax hikes. “If he carries on like this,” said Aryeh, one of the diners, “he is bound to disappear from the political map just as quickly as he appeared on it.” The others nodded their agreement.

A few months ago, it all looked different. Lapid, the prince who had just made his entry into Israeli politics, arrived in Ashdod as part of his election campaign. I, too, went there for the very same purpose, in my capacity as a Knesset member on behalf of the Labor Party. As I was leaving the office of Ashdod Mayor, Yechiel Lasry, Lapid was on his way in. Municipal employees came out of their rooms to have a close look at the new political meteor. Some pressed his hand in silent greeting, while others, unable to contain their admiration, fell on his neck. Lapid hugged and caressed and kissed his hosts as if he had been born for the role.

Back then, he had already emerged as a promising figure who could be counted on to stir up a political revolution. Even before the election, he was marked as heralding a new era in the stale and fossilized political system. And although he was perceived as a symbol of wealthy Tel Aviv, the residents of Ashdod found in Lapid a natural ally and partner for their aspirations for the development of their city.

No other city in Israel has revolutionized the fabric of its life the way it has been done in Ashdod. The city was established just six decades ago, when a scattered collection of tents were pitched along the beach to accommodate new immigrants from North Africa. Over the years, it has grown to be the fifth-largest city in Israel. About 230,000 Israelis live in Ashdod, half of them immigrants from the former Soviet Union who settled in the city in the last two decades.

I have often been asked by foreign journalists who come to Israel where they could see “the real Israel.” They wanted to know where to go and with whom to talk to get an authentic feeling of the mood prevailing in the country. Over the years, I was more and more inclined to send them to Ashdod. Since, more than any other city in Israel, it represented middle-of-the-road Israel — somewhere in between the spirituality of Jerusalem and the materialistic hedonism of Tel Aviv, the Israel of people without high pretensions who have gathered from all over the world and made their home in Ashdod. I used to explain to my colleagues from abroad that they would not find any extreme ideologies in Ashdod; instead, they would easily meet residents who spoke fluent  French, Moroccan Arabic, Tunisian Arabic or Arabic, not to mention those articulate in Russian. In fact, it may be the only city in Israel where the native languages of its inhabitants are still commonly spoken, more so than the official language of the country.

While the Israeli media has lashed out against Lapid, condemning him for his “betrayal” of the middle class, in Ashdod he is seen as a real menace, liable to utterly break the local middle class inhabitants. “Unlike Tel Aviv, we don’t have high-tech enterprises here or an advanced industry,” said Yaniv, a resident of Ashdod who is about to finish his postgraduate studies in political science at Ben-Gurion University of the Negev. “We are stuck here. We have nowhere to go. If you lower the standard of living of the residents, they will simply stop buying; they will stop spending money. And it can bring down the economy of the city.”

Oron, a student at Sapir College, located in the environs of the western Negev town of Sderot, cast his vote for Lapid in the last parliamentary election, like many other Ashdod residents, in the hope that Lapid would tend to the needs of young people like him and his friends who are about to enter the labor market. “I was confident that he would correct the injustice of Israeli economy,” Oron explained. “I believed that he would take from the upper crust and help people like me, who still have no job and no apartment of their own. But what is he doing? He is hitting people like me, of all people. It is disheartening.”

Oron took part in the mass protest marches that paralyzed Tel Aviv in the summer of 2011, which called for social justice. He came then with his friends all the way from Ashdod to join the largest protest movement in Israeli history. He is really proud of having been one of those 500,000 people who cried out against social injustice at that demonstration held in the central square of Tel Aviv on that Saturday night of Sept. 3, 2011. When Lapid emerged into the political arena, Oron put his trust in him and in his Yesh Atid party, the professed advocates of that social-justice protest. “I feel awful now,” he recounted. “I feel cheated. And it is not just me, but all my friends who participated in that mass protest.”

In the recent Knesset election, close to 30% of the votes in Ashdod were cast for the ultra-Orthodox parties Shas and Yahadut HaTorah, which mirrored the percentage of ultra-Orthodox residents in the city. In Ashdod’s ultra-Orthodox neighborhoods, you should not even mention Lapid’s name. They still consider him to be the “bad guy” of the last election, the man who drove them out of power. Even today, months following the election, his “twisted” portrait can be seen, hanging awry on signboards attached to the walls of buildings.

It is the first time since the election that the ultra-Orthodox feel solidarity with Lapid’s new foes, even though they are secular. “It is a pity that only now, after being hit in the purse, the secular have all of a sudden turned furiously against him,” said Yossi Amar, a follower of Rabbi Josiah Pinto. ”Where were they when he undermined the world of the Torah and the rabbinical college students?”

Such is Israel of 2013. Given the political stalemate, economic and social issues have captured center stage in Israeli society. Most parties almost totally refrained from dealing with the political conflict in the election campaign, and it is against that background that Lapid emerged as the biggest winner in the 2013 election. Will he become the first victim of that new Israeli politics? Only time will tell.

Daniel Ben Simon is a former Knesset member from the Labor Party. Prior to his political career, he was a journalist with Israeli dailies Haaretz and Davar. Ben Simon wrote four books on Israeli society and is the recipient of the Sokolov Prize, an Israeli journalism award.