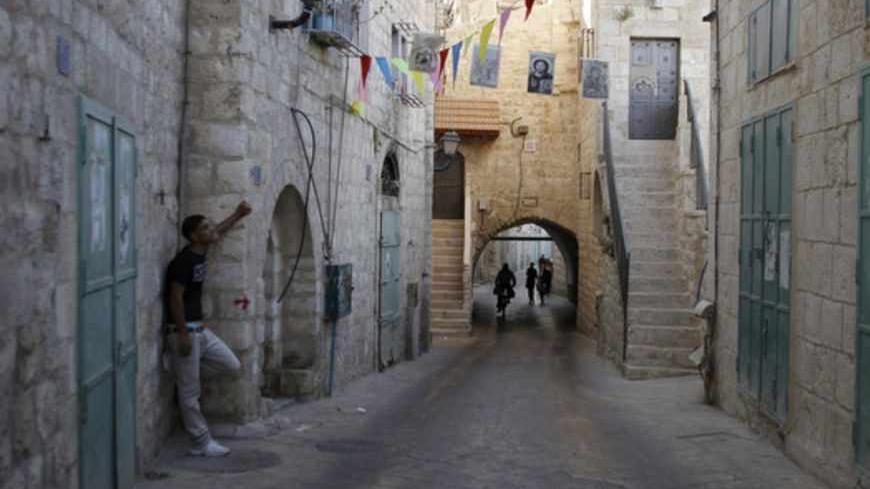 A Palestinian stands on a section of the Pilgrimage Route, the path which tradition says Joseph and Mary took into the West Bank city of Bethlehem in their trek from Nazareth some 2,000 years ago, June 28, 2012. - REUTERS/Ammar Awad

UPPER NAZARETH, Israel — In the office of Shimon Gapso, mayor of Upper Nazareth, they feel as if they were under siege. Lately, Gapso has found himself in a struggle with Jewish and Arab residents who accuse him of racism. The latter are infuriated by Gapso's refusal to approve the establishment of an Arab school in the city.

In recent years, Upper Nazareth has changed its face. Thousands of new immigrants from the Commonwealth of Independent States [the former Soviet Union republics] settled in the city, rendering it into “a small Russia.” The influence of the new immigrants is evident in every aspect of life in the city — in the economy, trade and everyday life. Almost every other resident of Upper Nazareth speaks Russian. The Russian Jews maintain close ties among themselves and insist on using their native language as if it were the local official language.

The new immigrants joined the first inhabitants of the city, many of whom had immigrated to Israel from North Africa and kept on speaking French and Arabic even after integrating into Israeli society.

Alongside the new immigrants and the veteran ones, Arabs from nearby villages and towns began flocking to Upper Nazareth. They sought to improve their quality of life, enjoy the upgraded municipal services offered by the city and find their place in the local Jewish society. Their integration in the urban environment was smooth. They encountered no opposition on the part of the Jewish residents or the local municipal authorities. Many of them settled in new neighborhoods, while others made their home in the Jewish parts of the city, mingling with the veteran inhabitants and the new immigrants.

However, with time and as the flow into the city increased, concerns grew about the Arab influx and voices were heard calling to curb it. “There are too many Arabs in town,” senior city officials were quoted as saying. Others openly cautioned that if the "phenomenon" were allowed to go on, Upper Nazareth would soon resemble neighboring Nazareth and become an Arab city in every respect.

It is estimated that close to 20% of Upper Nazareth’s 52,000 residents are Arabs. The Arab students — who currently number about two thousand — have to travel to schools outside the city, in nearby Arab villages. “In the absence of adequate educational frameworks, the Arab residents’ right to accessible and available education and equal allocation of public and municipal resources is infringed on,” states Ashraf Elias from the Association for Civil Rights in Israel (ACRI) in his appeal to Mayor Gapso, demanding that an educational framework for the Arab students be set up.

The call for the establishment of an Arab school in Upper Nazareth has sparked fire in the city. The controversy over the issue has divided the residents into two camps — those who are in favor of the establishment of an Arab school and those who are against it. Nationalist sentiments have come into conflict with ideals of justice and equality. Arabs and Jews who once lived side by side in harmony have found themselves all of a sudden on opposite sides, each side convinced of the justice of its case.

“There will be no Arab school here as long as I am mayor of Upper Nazareth!” Gapso informed the local residents. He was not too particular about his choice of words and made no attempt to present his case in a more civil manner.

That is the person at the helm of the city and that is his nature. It is a highly sensitive city, whose mixed population presents a tough challenge of maintaining a normal fabric of life and neighborly relations between its residents. “Accusing me of racism is doing me injustice,” Gapso told me as we were sitting in his office. Four years of sparring with rival city council members and frequent dismissals of deputies and advisors have lent him an image of a ruthless sheriff.

Turning to me, a grin spread across his face, he said, “I am asking you, how can I be a racist? After all, like you, I was born in North Africa and lived next door to Arabs. We used to drop in and out of each other’s homes as family members do. So, how can they call me a racist?”

The walls of his office are adorned with maps and pictures of the city and the country as well as rabbis and personal photos taken in the course of his military service. He immigrated to Israel with his parents in 1969, when he was 10 years old, and settled with his family in Upper Nazareth. “I am really lucky,” he admits. “I was spared the danger of a mixed marriage. Had I stayed in France, I would have undoubtedly married a Christian. Most of my family members married Christians. And I am telling you, that is what undermines the survival of the Jewish people. It is our religion that has been keeping us as a Jewish people.”

Although he himself is not religious and does not observe the Jewish law of the Sabbath, he takes sides with the followers of the Jewish religion and faith, who believe that they are keeping Judaism alive. “So, how can I possibly approve the establishment of an Arab school in our city?” he wonders, adding passionately, “I would like to remind you that Upper Nazareth is a Jewish and democratic city — first Jewish and then democratic. True, the Arabs account for nearly 20% of the local population; however, I am doing my best to increase the number of Jews in the city.”

This November, municipal elections are to be held for both the office of mayor and the city council. Gapso sees it as the battle of his life. He is confident that he will be re-elected. He expects many of the Arab residents to cast their vote for him. “The Arabs appreciate straight talk, and I am telling them the truth. They know that with me in office, they are going to receive full municipal services as well as warm treatment. Yet, when it comes to the Jewish identity of the city, they are well aware that I mean what I am saying.”

Gapso reckons that the more radical the attitude he displays with respect to the Arabs, the more points he is scoring to his credit among the Jewish immigrants from the former Soviet Union. They, too, he says, welcome straight talk, and like him they are ready to fight to the end to preserve the Jewish identity of the city. “The Russians are leaning far right and they are definitely secular. My experience with them has shown me that they value power, and they see me as a person who has a lot of power.”

As if it were not enough for him to stir up conflict with the Arab residents, he has recently begun preparations for the construction of a new neighborhood in the city intended exclusively for the ultra-Orthodox Jewish community. If authorized, the plan will attract to Upper Nazareth thousands of ultra-Orthodox Jews in search of housing. He has already met with rabbis from the ultra-Orthodox community, as well as with architects, and submitted to the Interior Ministry plans for a new neighborhood designed to accommodate 3,000 ultra-Orthodox families. The move has sparked fury among Jews and Arabs alike. Secular Jews residing in Upper Nazareth have threatened to desert the city, while the local Arab inhabitants charge that the move is aimed against them.

“That’s right,” Gapso confirmed. “I am a secular Jew and yet, I am interested in having ultra-Orthodox residents here. That’s the only way to reduce the percentage of the Arab population in the city to some 10%. I am also acting to bring groups from the religious zionism movement here, so as to maintain the Jewish character of the city. Otherwise, the city is bound to lose its Jewish identity and become an Arab city, and we are liable to end up with two Arab cities: Nazareth and Upper Nazareth.”

Gapso feels that the struggle for the future of Upper Nazareth is, in fact, a crucial struggle for the future of the state. As he sees it, his city is a microcosm that embodies the problems facing the state of Israel. To make his point, he gets up from his chair and walks over to the map hanging on one of the office walls. The Galilee, he notes, indicating the region on the map, is where the Jewish majority is most precarious, hanging by a thread, so to speak.

Gapso concedes that as a human being, he can sympathize with those parents who, for lack of an Arab school in Upper Nazareth, have no choice but to send their children to schools in far-away Arab communities every morning. At the same time, as an Israeli Jew, he regards the establishment of an Arab school as a threat to the Jewish future of the state.

“In my eyes,” he explained, “the struggle for a Jewish majority in the Galilee is far more important than our presence in Judea and Samaria. If we lose the battle here, we will lose it everywhere throughout the country.”

The battle for the image of Upper Nazareth has just begun. The largest supermarket in the country is about to be built in Upper Nazareth shortly. Jews and Arabs from all over the area are expected to flock there to take advantage of “the lowest prices in Israel,” as the advertisements promise.

Be that as it may, it seems that the forthcoming municipal elections are going to be a critical test for the fragile coexistence between them.