The New Era of Israeli-Arab Nazareth

The youth of Nazareth, the largest Arab city in Israel, are determined to integrate into Israeli society, but only as equals among equals. 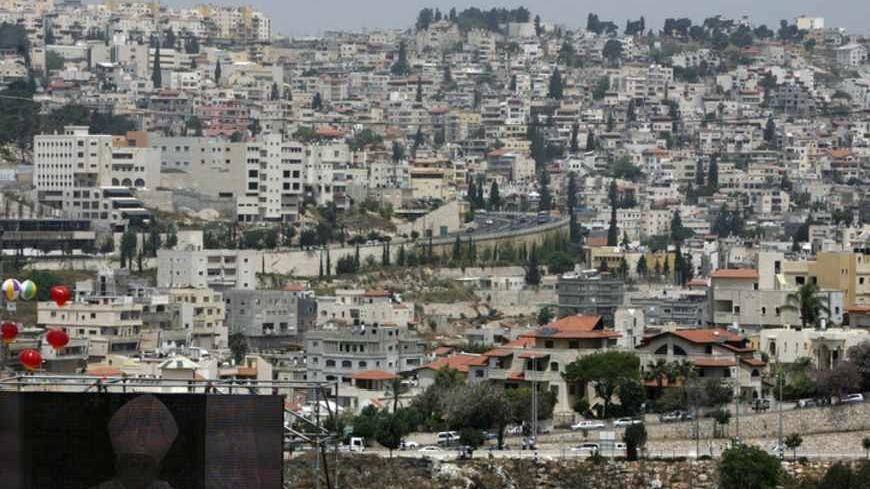 The bustling cityscape of Nazareth provides a backdrop for Pope Benedict XVI (seen on a large screen, lower (L)) as he celebrates Mass on Mount Precipice in the northern Israeli city, May 14, 2009. - REUTERS/Ronen Zvulun

NAZARETH, Israel — This is the largest Arab city in Israel, in the Northern District of the country.

Fadoul Mazawi parked his shiny Lexus on a side street in the city. He gingerly worked his way between two other brand-new cars, a Mercedes and a BMW. “This is not the Nazareth that you once knew,” he said with a broad grin. ”What you see around here is not only a thriving Arab city, but [also] an Arab culture that is quite unlike what most Jews have come to know.”

The main street was bustling with passersby. People were coming and going in and out of spacious shops resembling fancy showrooms and featuring the latest fashions in all areas of life, from children's clothing to mobile devices. Two salesladies in one of the electronics showrooms were wearing traditional stylish headscarves, while two other salesgirls working in the same store were dressed in a modern style, one wearing a miniskirt and the other, colored shorts.

In the background, the muezzin’s call for the noon prayer was heard above the racket, but the murmur of the prayers was drowned in the din of the busy Nazareth street. Hundreds of tourists were getting off buses, on their way to the Church of the Annunciation. Some Muslims were praying just below the church, where the Shihab al-Din mosque had been standing until a while ago, before being dismantled due to some religious dispute with the Vatican.

On that summer day, Nazareth seemed to be a city in bloom.

However, underlying the facade of prosperity, a deep internal crisis is lurking, which weighs heavily on Arab society in Israel. “You Jews are under the impression that the Arabs are still living in the Middle Ages,” my interlocutor added, “but this is no longer true and hasn’t been for quite some time. In the last few years we have made considerable progress and at present, we are not lagging far behind you. In fact, in certain areas, we are on par with you.”

Fadoul Mazawi is in his early 40s, a father of three children. He is considered a wealthy businessman. His advertising agency has more than 20 employees. Recently, he moved with his family to Upper Nazareth, as did thousands of the Arab residents of Arab Nazareth who settled in the neighboring Jewish city. At the time the state of Israel was established, Fadoul‘s family belonged to the solid Christian majority that was in control in Nazareth. Today, more than 60 years afterward, the tables have turned and the Muslims now form an overwhelming majority of about 70% of the local population.

“The crisis we Arabs are experiencing has to do not only with the relations between Christians and Muslims; it also concerns the interaction between the younger generation, which is open to Western culture and holds liberal ideas, and the older generation, which is stuck in the past and still adheres to traditional values,” Fadoul noted.

“My friends and I feel at home with the digital revolution that changed the world. We all have Facebook accounts and use them to communicate with each other. We write in Arabic, but we are equally comfortable with Hebrew and English. When you visit us or call on young Arabs, you are offered a variety of coffee brands — cappuccino, espresso, café au lait or black coffee, whereas in the past, you were served only one type of coffee — Arabic coffee. When you went to a restaurant, the waiter would pour Arabic coffee from a coffee pot into a small cup once you were finished with the meal, but this is no longer the custom.

"The Arab community is no longer living in a ghetto, the way it used to. We are currently an open society that seeks contact with and integration into Israeli society. I don’t want my children to be any different from your children. However, the older generation does not welcome this change.”

This internal revolution manifests itself in Arab politics as well. The voting rate of young people has been steadily declining in recent elections as they feel increasingly alienated from the Arab parties, which fail to provide an answer to their problems. Those young voters feel that their voice is not heard in the political game. They hoped to see new faces, but have remained with the old ones. They expected to have a diverse female representation, but have been left once again with Balad Knesset member Haneen Zoabi.

“Almost all studies point to the growing chasm between young voters and the Arab parties,” explained Fadoul. “And while young modern Arabs are concerned about the Israeli-Palestinian conflict, they would prefer the parties to deal with our internal problems — the unemployment condition, the discrimination, the deprivation, the glass ceiling of achievement for Arab academics, and their integration into Israeli society. Unfortunately, the Arab parties are perceived as representing the Palestinian Authority.”

Another advocate of Arab integration into Israeli society is Ziyad Abou Habla, a 38-year-old accountant, who was the first Israeli Arab to run for a seat on the board of directors of Bank Leumi. The state of Israel, which is a co-owner of the bank, supported his nomination to the board. Alas, in a secret ballot, he was left out.

To overcome the barriers on his way (to integration into Israeli society), Abou Habla volunteered for national service, to which he devoted three years. Not all his friends were pleased about the move. “I believe that it should be our goal,” he told Israeli daily Globes. “Who am I really serving? It is my own people and my own society. My personal opinion is that we should contribute, notwithstanding the opposition in the Arab society.”

He never misses an opportunity to lash out against the Arab parties in his opinion column in the Israeli daily Haaretz. According to Abou Habla, had voter turnout among Israeli Arabs been higher, things would have looked different. “The result is that the Arab population and its needs are not accounted for in the distribution of the government pie. Since the establishment of the state of Israel, no Arab party has ever had a part in the government makeup, and the Arab leadership has thus been banned from the centers of influence and control. The Arab population can show a higher voter turnout — which, much like the Arab voter turnout in municipal elections, stands at 10% — and by doubling the number of incumbent Arab members in the Knesset, lead to a change and present an alternative to the ruling government.”

The ongoing trend of integration of young Arabs depends to a large extent on the capability of Israel and the Palestinians to reach a peace agreement. As long as the two sides are in conflict, the Arab citizens of Israel will be suspected of dual loyalty — to Israeli society, to which they belong, and to the Palestinian people, of which they are a part. “Peace with the Palestinians would be a dream come true for the Arab population in Israel,” Fadoul excitedly states. “If it happens, Israeli Arabs will open a new page in their relations with Israel. For me, it will be a day of celebration.”