Battle for Nazareth mayor a loser for Christian-Muslim relations

Ever since local elections in Nazareth three months ago, a fierce legal battle has been taking place between the Muslim candidate and his friend, the incumbent Christian mayor, over the latter's seat. 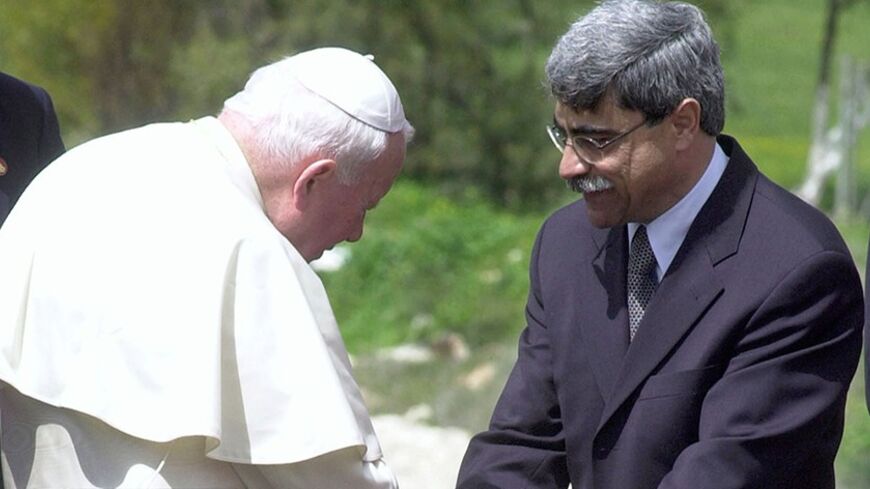 Nazareth Mayor Ramez Jaraisi bids farewell to Pope John Paul II as the pontiff departs after giving mass at the Basilica of the Annunciation, March 25, 2000. - REUTERS

Though three months have passed since Nazareth's mayoral elections, controversy still reigns regarding the identity of the winner. To this very day, it is not clear who is and who will be the mayor. Residents of the city have never encountered such a situation. On the Oct. 22 election day, Ramez Jaraisi still served as the city’s long-standing mayor. A few days later, after the ballots were counted, Ali Salam was declared the winner — a man who had served as Jaraisi’s deputy for 15 years.

Two weeks later Salam went to the municipal building, entered the familiar chambers and took over the mayor’s chair that his colleague had vacated. However, the defeated mayor did not give up so easily. According to the official count, only 22 ballots separated Jaraisi from Salam, the victor. If 12 votes had gone the other way, Jaraisi would have continued on for his fifth term, another five years.

Jaraisi appealed to a local court, arguing that one envelope containing 47 ballot envelopes had not been opened and counted. According to the names of the voters, Jaraisi reckoned that most of them would have cast their votes for him. Salam opposed the opening of the envelope, and the issue reached the district court. The judges ruled to open the envelope, but Salam petitioned the Supreme Court to prevent this.

It emerged that the mysterious envelope was defective because the polling-station secretary forgot to sign it after counting the ballots and inserting them. When the envelope reached its final destination and was opened, someone noticed that the signature was missing; the chairman of the election committee ordered its disqualification.

On Jan. 8, a Supreme Court hearing was held regarding the legality of that fateful envelope. Opposite the three justices sat the lawyers of the two claimants to the throne and their supporters. Great tension was evident on their faces. Local pundits claimed that not only did Nazareth’s future hang in the balance, but the future of the country’s entire Arab sector as well. This is also the impression we receive from the massive interest of the Arab media. Arabic-language news sites lunged at the unfinished battle with great satisfaction, as if this was the only issue on the agenda.

During the tense wait for the final verdict, the two camps set up tents in the city, where supporters of the two contestants congregated. Great tension reigned in these tents. Christians were dominant in Jaraisi’s encampment, and Muslims dominant in Salam’s. “I just hope this doesn’t lead to religious war between Christians and Muslims,” said a political activist in the city who asked to remain anonymous. “If that happens, it will be a disaster because it will turn the clock back in this city.”

The Supreme Court handed down its verdict a day after the appeal was submitted. The justices ruled that the 47 ballots in the envelope are legitimate. The missing signature of the polling secretary was an arbitrary error and did not indicate corruption or irregularities. After the votes were counted, it emerged that the initial loser Jaraisi had defeated "new mayor" Salam by nine votes.

Celebrations erupted throughout the city and supporters of Jaraisi filled the streets, praising the old-new mayor. However, Salam refused to vacate his seat and said that if a recount of the ballots disqualified in the first round takes place, it would give him a majority again. Salam petitioned the district court again, ignoring the Supreme Court's final verdict. Thus, in the near future, the district court will again have to pass judgment on this unfinished saga.

Until recently, Jaraisi and Salam had been good friends. They tied their fate together and symbolized Muslim-Christian fraternity in the Arab sector’s largest city. Of the city’s 80,000 residents, 65% are Muslim and 35% Christian. Similar percentages were registered in 1948, but in reverse; then, the Christians held the large majority. The political alliance between the two friends greatly shaped the sociopolitical texture of the two populations and engendered stability that served the city well. Today, on the heels of the electoral controversy, the two friends do not talk to one another. Suddenly, swords have been unsheathed and battle cries sounded that threaten to shatter the city’s tranquility.

“The situation in the city is very tense,” Fadoul Mazawi, owner of a large advertising agency in Nazareth, told Al-Monitor. “The city is paralyzed, and I am afraid of the radical statements we hear from both sides. This situation is very inflammable and likely to blow up after the final results are made public.” National Arab politics also waits tensely on the sidelines. If Jaraisi loses, his defeat will be viewed as symbol of the Arab Israeli Hadash Party’s weakening on the national level. Hadash has ruled in Nazareth for 30 years without exception. “Defeat in the city will be perceived as a great blow in the Arab sector,” added Mazawi. “As far as they are concerned, this is a battle of a survival.”

Like others in the city, Mazawi, a Christian, is concerned that the political struggle could ignite ethnic fires. “If the court renders its final decision in favor of Jaraisi, it will be problematic because it will light a fire between Muslims and Christians. The Muslims will argue that the elections were stolen from them.”

It is an open secret that the mysterious envelope in which Jaraisi received his additional votes contained the ballots cast by the city’s soldiers. Over many years, Jaraisi preached high and low against enlistment of Arabs into the Israel Defense Forces (IDF). Thus, Jaraisi’s antagonists feel it hypocritical that the man who preached against Arab enlistment, should earn his fifth term by virtue of Christian soldiers' ballots. “There are 30 ballots cast by soldiers from Nazareth, ballots that have not been counted and can tip the scales,” argued Jaraisi in his appeal to the court.

“Let’s recall a few long-forgotten events,” writes Shai Friedman in his blog on Nazareth. “There is a war in Nazareth against youths who enlist in the IDF [Israel Defense Forces]. Nazareth’s mayor was a key player in this war. He participated, together with fellow party members from the Knesset, against ‘enlistment in the Zionist army.’ A Druze youth who received a call-up order tore it up to the sound of the cheering crowd. Jaraisi and the members of his party clapped their hands.”

Within this uncompromising battle between two people who had once been good friends stands the city of Nazareth, hostage to ignoble political storm winds that refuse to die down.