Mayor of Upper Nazareth on Mission To Rid City of Arabs 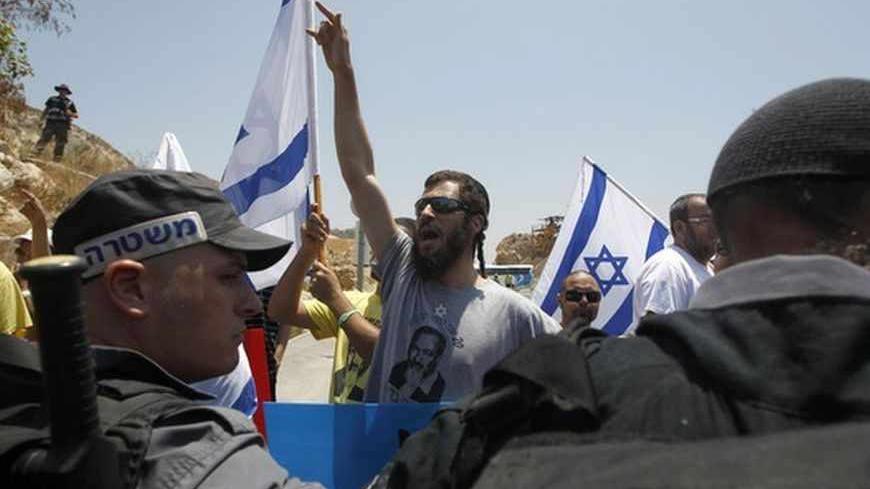 Shimon Gapso has been the mayor of Upper Nazareth since he was elected in 2008. He succeeded Menachem Ariav, who had held the post for thirty years. Ariav was considered a powerhouse whose rule of the city went unchallenged. He had no qualms about waging fierce political battles. No one expected that his successor would be not only even more powerful than he had been, but also a violent racist who takes pride in his benighted ways.

Upper Nazareth, adjacent to the Arab city of Nazareth, was founded in 1956 as part of a program to “Judaize” the Galilee. It developed quickly over the years, and in 1974 it was declared a full-fledged city. Its population doubled in the 1990s, due largely to the wave of immigration from the former Soviet Union. New neighborhoods were built, and the city was transformed beyond recognition. Some of these newer neighborhoods, particularly Har Yonah, also attracted Arab residents.

Frustrated with the failing infrastructure in their city, Arabs from Nazareth tried to improve their quality of life by purchasing homes and apartments in Upper Nazareth. Low initial prices also contributed to a surge of new Arab residents. Today, some 18% of Upper Nazareth’s population is Arab. Most are Christians, though there is also a significant Muslim population. As the number of Arab residents grew, many called for an Arab school.

Gapso does not like the idea. More generally, he does not like the idea that there are Arabs living in his city. After a state comptroller’s report accused him of mismanagement and he was indicted for bribery, he decided to base his campaign for the municipal elections in October on his disdain for the city’s Arab citizens.

Although it is unclear whether this is part of his overall worldview or simply an attempt to shift public focus away from the serious accusations he faces, the bottom line is that Gapso is waging a violent, racist campaign unlike anything ever seen in Israel. He is openly advocating for the removal of the city’s Arab residents.

Gapso’s campaign signs show his picture along with the slogan “Upper Nazareth, Jewish forever.” Another series of signs plastered across the city shows Knesset members Ilan Gilon (Meretz), Haneen Zoabi (Balad) and Ahmad Tibi (Taal) along with statements that they have made condemning the mayor. At first glance, these posters would seem to be part of a campaign against him, but they are actually an attempt by Gapso to win the support of the local population by showing that the Israeli left specifically targets him.

In an interview on Aug. 5 with Channel 7, Israel’s right-wing news channel, Gapso said, “Upper Nazareth is a Jewish city, and no Arab school will be built there as long as I am mayor. There are alternative solutions. … The main problem is that they want to cause a provocation. It starts with a school, but then they’ll want a mosque and a church. We have to nip it in the bud. … Anyone who wants to live in the Jewish city of Upper Nazareth should consider that he will have to drive or somehow transport his kids to a school somewhere else.”

In addition to this campaign, Gapso is supporting and promoting other projects intended to “Judaize” Upper Nazareth. One of these is the relocation of hundreds of ultra-Orthodox families to the Har Yonah neighborhood. To do this, he has met with the Boyaner Rebbe, whose followers are supposed to occupy some 200 apartments built especially for them in the neighborhood. Gapso has also expressed his support for an initiative promoted by Deputy Mayor Alex Gadalkin, chair of the Yisrael Beiteinu faction in Upper Nazareth. Gadalkin has offered $10,000 to any Arab family that leaves the city and promises not to return.

It remains to be seen what will happen to Gapso and whether he will be elected to a second term as mayor. What is certain, however, is that through his statements and deeds, he has brought Israeli racism out of the closet. If, in the past, statements like his were always said in hushed tones, and deeds like his were only done under the cover of darkness, Gapso has moved the racist discourse from the extreme fringes to the very heart of the public agenda. In so doing, he has intensified the tensions between Arabs and Jews that already exist in Upper Nazareth and elsewhere in the country.

With this ugly campaign, Gapso has managed to make people forget the accusations against him and become one of the leaders of Israel’s far right. Former Knesset member Michael Ben Ari, the leader of the extremist Otzma LeYisrael party, wrote a Facebook post a few days ago praising Gapso’s behavior: “Let’s salute the mayor of Upper Nazareth! The Arab enemy is taking decisive measures to turn Upper Nazareth into an Arab city. They are buying up building after building, and now they are demanding an Arab school. Shimon Gapso is a bold Jewish leader who realizes that if Upper Nazareth falls, Karmiel and Afula will follow, and so will Hadera. … We lack leaders like this who understand that the battle for this country has shifted from the borders into the interior.”

There can be no clearer proof of one's racism than being designated a leader by Ben Ari. If Gapso wins and is re-elected mayor of Upper Nazareth, it will prove that xenophobia has made the transition in Israeli society from a shameful phenomenon that is repudiated to a popular position that ultimately pays off for its adherents.