New municipal elections in Beit Shemesh will test the power of a new alliance of ultra-Orthodox factions. 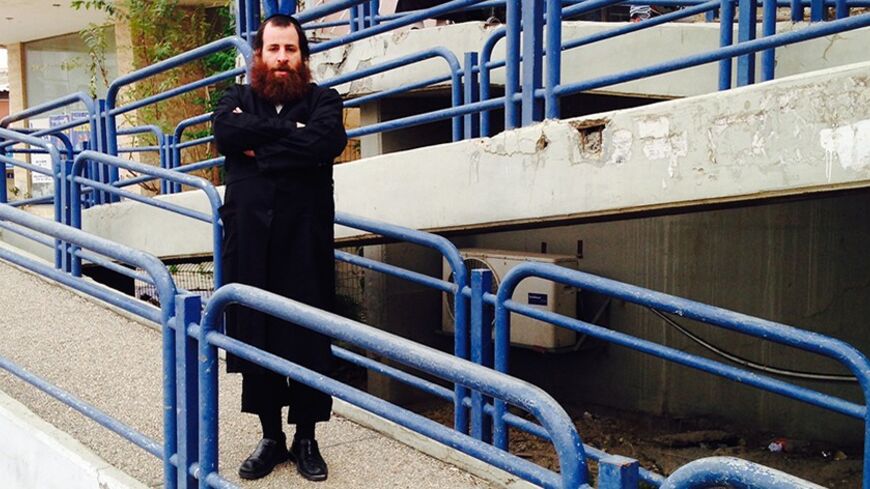 JERUSALEM — A candidate running in the Beit Shemesh municipal elections said that his town is like a pressure cooker. With all the pressure building up inside, it could explode at any minute. It seems like everyone is tense, everyone is nervous, everyone is wandering in a sleepless daze, anticipating the elections that will take place on March 11. This is the second time in the past six months that the town of Beit Shemesh is holding an election. The winner in the first election in October 2013 was the ultra-Orthodox candidate Moshe Abutbol, who beat his rival by about 1,000 votes, earning him a second term as mayor.

A short time later, however, it was discovered that ultra-Orthodox voters voted twice or used phony ID cards to vote instead of someone else. Taking advantage of their somewhat similar appearance as ultra-Orthodox Jews, they were able to fool the members of the election committee and vote at two separate polling stations. Eli Cohen, the secular candidate for mayor, appealed his loss, and the Jerusalem District Court ordered that new elections be held in the city.

As the second round of elections approach, the mood in the town is animated, and the city doesn’t get a moment’s rest. Campaign posters from the first election can still be seen almost a year later, beside new campaign posters for this second-round vote. Pictures of the candidates appear everywhere, along with some forceful campaign slogans declaring that they are the best and the most successful, so they are the ones who deserve the voter's trust.

In the election headquarters managed by Richard Peres, there is no room to move. Dozens of activists and volunteers come in and out carrying pamphlets and other promotional materials to distribute in the street. Peres is the head of the town’s branch of the Labor Party. For these elections, he joined forces with the other secular parties to stand against the ultra-Orthodox coalition. But the ultra-Orthodox factions also joined forces to confront the united secular family. Under normal conditions, most of the ultra-Orthodox factions despise one another, but now they are cooperating in the struggle against the secular enemy. In response to this common enemy, there is a truce, though probably temporary, between Ashkenazi ultra-Orthodox Jews and Sephardic ultra-Orthodox Jews, even if, under normal conditions, they would insist on almost total separation between them. They may all be ultra-Orthodox, but they do not live together, they do not study together, and they will not even marry each other. Now, however, with the municipal elections approaching, all the various factions and groups have joined together as if they have lived in harmony since the days of yore.

Peres is in the middle of an emotional phone call with the town’s police chief. His people have reported to him that masses of ultra-Orthodox Jews have appeared at the offices of the local population registry to receive new ID cards. He asks the police chief to keep an eye on what is going on there.

“It’s not against the law to take out an ID card,” the chief of police responds on the other end of the line.

“But you know as well as I do that they want to make fake IDs,” Peres shouts.

“Okay, I’ll send some policemen over there to check it out,” the police chief says.

Peres, a man in his 50s, has a hard time calming down. Whenever he sees an ultra-Orthodox Jew in the street, he imagines a fake ID. He doesn’t believe the ultra-Orthodox anymore and has come to really hate them. To illustrate the sense of urgency that has come over the town, he uncovers a big map hiding behind an election poster. It is a secret map for the partition of Beit Shemesh on the day after the election. “After we win,” he explained, “we’ll begin the process of partitioning the town in two. There will be an ultra-Orthodox Beit Shemesh and a secular Beit Shemesh. There will be two localities with a municipal boundary between them. On the day we separate from the ultra-Orthodox, we’ll feel as if we have gone from slavery to freedom.”

Peres glances sadly at me: “Then that will be the end of secular life in Beit Shemesh.”

A few dozen ultra-Orthodox Jews are milling about outside the local branch of the Interior Ministry. The two police officers sent by the local police chief are blocking the entrance and ask each ultra-Orthodox Jew what they are doing there. Each one has his own excuse. One of them lost his ID card, another one’s ID card got wet, and yet another one says that his was torn. The police officers are certainly suspicious about these explanations, but they finally succumb and allow the ultra-Orthodox to enter the office. “It won’t help them,” claims Moshe Spivak, news editor of the paper Local Shopping, who happens to be wearing a knitted skullcap distinctive of the national-religious community: “The voter registry has been closed, and it is impossible to add or remove any names. In other words, they can’t cheat anymore.”

Michal Bashan storms in to one of the secular headquarters to offer her help. Bashan is a member of Kibbutz Tzora, just a five-minute drive from Beit Shemesh. She has been experiencing a severe case of existential anxiety ever since the town fell to the ultra-Orthodox. Bashan, a woman in her 40s, is convinced that if Beit Shemesh elects an ultra-Orthodox mayor again, it will harm the surrounding localities, including Tzora. She can already see how streets and roads are being closed on the Sabbath, how the ultra-Orthodox are taking over new land, how more and more rabbinical colleges are being built and how her kibbutz is left to fight the demographic threat on its own.

“I can actually see the Jewish people splitting apart right before my eyes,” she says, her voice choked with emotion. “Beit Shemesh could come to represent the chasm separating the new breed of Israelis like me and the Jews who want to take us back to the past. What you are seeing in Beit Shemesh is the budding of a revolution that will change the entire face of the country. There’s a hole in the hull of the ship that is Israel, and it is just a matter of time before it sinks.”

Thousands of people packed the town’s main square last Saturday night. They included people from the right and from the left, secular and religious, from the big cities and the smaller localities. They all came to offer their best wishes to the secular camp. Sitting beside each other on the podium were Minister of Transportation Yisrael Katz from the Likud Party; Isaac Herzog, chairman of the opposition, from the Labor Party; Minister of Housing Uri Ariel from HaBayit HaYehudi; and, other politicians from across the political spectrum. Party differences vanished at this gathering. They all came together as one to show their support for the secular candidate Eli Cohen.

Not too far away, the ultra-Orthodox factions held a gathering of their own in support of their candidate Moshe Abutbol. The speakers delivered fiery orations and then everyone prayed on behalf of the candidate. Two rallies, two populations, two municipal visions and two approaches to Israeli society. Prime Minister Benjamin Netanyahu sent his greetings to the secular gathering, and the country’s leading rabbis sent their blessings to the ultra-Orthodox rally. The entire country is watching to see what happens in Beit Shemesh on the day after. Many feel that these elections will determine much more than the fate of the city. They will determine the character of Israeli society as a whole.

A young ultra-Orthodox man stood at the entrance to the offices of the Interior Ministry in the town and crossed his arms angrily. A group of secular youths were standing not too far away, cursing at him. “There’s nothing for you in Beit Shemesh anymore,” the ultra-Orthodox man shouted at them. “This is our city, and God willing, it will be our city. If you don’t like it, get out of here.”