Israel’s Knesset is considering a bill banning Palestinian flags from being raised at Israeli-funded institutions and universities inside the Green Line. 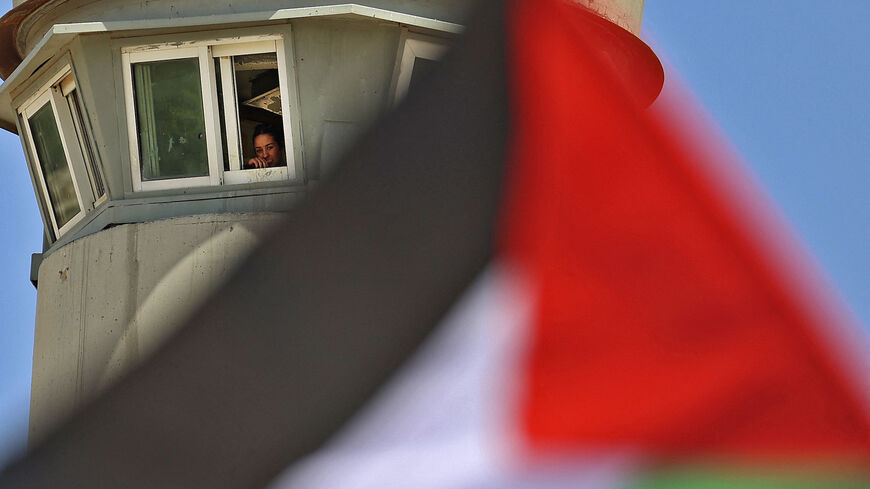 An Israeli soldier watches from a tower as Palestinian demonstrators wave the national flag in the city of Tubas on June 6, 2022, during a gathering to denounce the Israeli settlement expansion in the Jordan Valley. - JAAFAR ASHTIYEH/AFP via Getty Images

RAMALLAH, West Bank — An Israeli bill banning the display of the Palestinian flag at Israeli government-funded institutions including universities passed a preliminary reading in the Knesset on June 1, with 63 votes in favor and 16 against.

Israeli Prime Minister Naftali Bennet, who is also the leader of the Israeli right-wing Yamina party, voted in favor of the bill put forward by the Likud party, headed by former Prime Minister Benjamin Netanyahu.

Arab-Israeli students organized a sit-in on May 23 at the Tel Aviv University and Ben-Gurion University in Beersheba, in southern Israel, on the occasion of Nakba Day. The students waved the Palestinian flag and sang patriotic songs. Dozens of Israeli students held a counter-protest in response and raised Israeli flags.

Touma explained that the bill bans raising the flag at institutions supported and financed by the Israeli government. “The bill was tailored for universities and against students, especially after the protest at the university in Beersheba on the anniversary of the Nakba. Palestinian students raised their national flag to express pride in their identity and affiliation, which provoked the anger of settlers and extremists,” she said.

Since its establishment in 1948, Israel's Prevention of Terrorism Ordinance has prohibited raising the Palestinian flag as a symbol and flag of the Palestine Liberation Organization (PLO), which is outlawed under Israeli law. But in the wake of the Oslo Accords in 1993, the Israeli attorney general in 1994 directed the Israeli authorities not to prosecute those who raise the flag, citing Israel’s recognition of the PLO and the fact that it signed the accords with it.

In 2003, the Israeli Supreme Court ruled that raising the flag of Palestine during Arab political parties events inside the Green Line is protected freedom of expression.

Arab Knesset member Sami Abu Shehadeh of the Joint List told Al-Monitor that the bill is part of “ongoing attempts since 1948 to erase the national affiliation and identity of the Palestinian people within the Green Line. But these attempts have been unsuccessful despite the fact that Israel prevents Palestinian students from studying their history under the Israeli curriculum.”

Abu Shehadeh pointed out, “Israel prevented the Palestinians inside the Green Line from 1948 until 1994 from raising the Palestinian flag. However, the young generation during that period defied Israel" and crafted their own flags. "Some even broke this ban and raised the flag, risking arrest by Israeli forces. This battle will continue today. If the bill is passed, we will go to the Israeli Supreme Court.”

Tibi argued the bill “reflects mounting extremism and fascism in the Israeli street. Israelis want to undermine the Palestinian identity so they prevent the Palestinian flag from flying at Al-Aqsa Mosque, at the funeral of journalist Shireen Abu Akleh and in the streets of Palestinian towns and villages. Now they want to ban our students from waving it in universities.”