In the wake of protests at which participants waved the Palestinian flag in Tel Aviv, a bill is being fast tracked to ban the banner at even small gatherings. 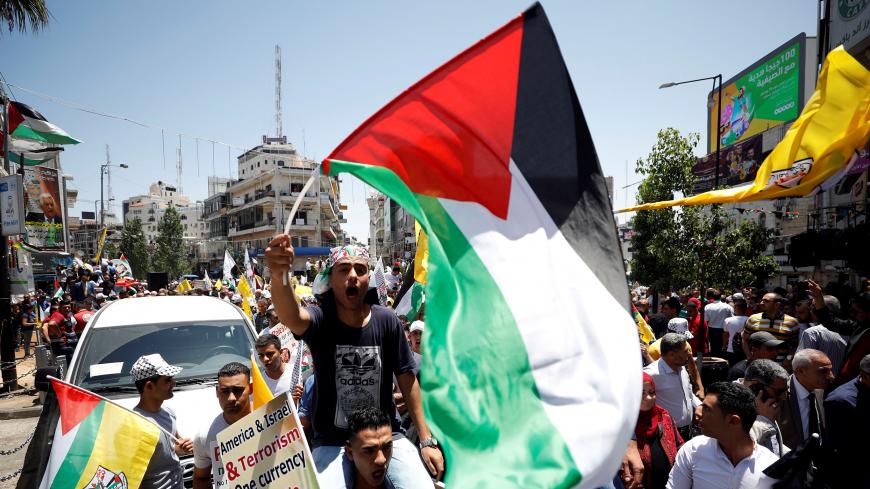 GAZA CITY, Gaza Strip — Knesset member Anat Berko of the Likud plans to submit a bill in October that criminalizes raising the Palestinian flag or the flag of any anti-Israel state during even tiny gatherings.

The bill outlaws raising the flags of states that are hostile to Israel, non-friendly states or commissions that do not allow the raising of the Israeli flag on their premises. Such individuals will face a one-year prison sentence.

The bill will be submitted to the Knesset at the beginning of the winter session in October and has already received pledges to facilitate its passage, according to the Israel Today newspaper. On Aug. 22, the newspaper reported that Berko had received promises that a Knesset committee intends to exempt the bill from the waiting period of 45 days that regulations require before bills are put to the vote.

The bill came in the wake of a demonstration organized by the High Follow-Up Committee for Arab Citizens of Israel in Tel Aviv on Aug. 11 against the nationality law passed July 19. The law states that Israel is the national state of the Jewish people and that they have an exclusive right to self-determination. Tens of thousands of Palestinian demonstrators took part in the demonstration and waved Palestinian flags, sparking ire in Israeli circles.

The draft law states, “It is illegal for groups of at least three people to gather to commit an offense or achieve a common purpose, even if this purpose is legitimate, if they cannot act in a manner that leads others to believe that their public safety is jeopardized. They also cannot act in a manner that provokes other people. Participants in such gatherings will be sentenced to one year's imprisonment.”

The Arab Knesset members denounced the move as a racist attempt to suppress the Palestinian identity.

Ayed Marar, the director of the legal department of the Colonization and Wall Resistance Commission, told Al-Monitor that raising the Palestinian flag in Israel is a legitimate right of Arab citizens following the signing of the Oslo agreement, under which Israel and the Palestinian Authority each recognize the other.

Marar said that Israel is in a state of denial of the agreement and has always been keen to disavow its obligations stated therein.

He explained that the bill does not go in line with Israel's claim to be a democratic state, as it is unreasonable for a state to ban the flag of another on its territory on the grounds of political differences and opinions. Doing so is only understandable when there is a state of official hostility between the two states, in which case there would be a legal status regulating the relations between the two parties. But this is very far from the Palestinian case.

He pointed out that if passed, the bill would make the problem worse, as Palestinians in Israel would not abide by it. He said that Israel does not respect the dignity of Arab citizens, adding, “The punishment is not commensurate with the act, which should not even be considered a crime.”

Marar stressed that peaceful Palestinian resistance is a social act and that everyone should play their part in confronting Israel, be it by boycotting Israeli products, engaging in direct confrontation, repelling Israeli policies.

Director of the Jerusalem Legal Aid and Human Rights Center Issam Aarouri told Al-Monitor that the bill reflects a state of anger and growing fascism in Israeli society and goes in line with the current orientation of the Knesset. The extreme right’s control has changed the situation through the enactment of several laws that discriminate against Palestinians. Added to this, he said, is the expansion of the settlement activity in the West Bank. In its 20th session, the Knesset approved more than 187 laws, compared to an average of only 23 during previous sessions.

Aarouri noted that the adoption of the bill will only raise the value of the flag and increase its symbolism.

“Crazy and extremist ideas are sweeping across Israeli society at a faster pace than ever before,” he said, stressing that the bill is one of a series of laws that contradict the principles of international laws and norms. He also explained that if more similar laws are enacted without serious steps to address them, it will contribute to the isolation of Israel in the long run because eventually, Israel will be officially deemed a racist country.

Aarouri pointed out that the PA should reassess its strategy in dealing with Israel, annul the agreements that Israel is disavowing and reverse its recognition of Israel.

“Banning the waving of the Palestinian flag implies the non-recognition of the legitimacy of the PA,” he said.

Journalist Mamoun Abu Amer told Al-Monitor that the Israeli structure lacks reason and political logic, and it is bound to harm Israel’s international image. He said that the US bias toward Israel was the reason behind the enactment of racist laws free of any consideration for Arab and international reactions.

Abu Amer stressed that minorities around the world have the right to raise slogans and symbols that represent them, and added that the adoption of the bill will promote violence, as minorities will feel that their existence is at stake and will be tempted to fight and take actions to prove their identity. He said that Israel is now dealing with other nationalities with rejection, and this is a dangerous indicator that is bound to threaten Israel’s security.

“In democratic countries, minorities are respected regardless of their proportion. All men are equal before the law,” he said.

Article 27 of the International Covenant on Civil and Political Rights of 1966 states, “In those States in which ethnic, religious or linguistic minorities exist, persons belonging to such minorities shall not be denied the right, in community with the other members of their group, to enjoy their own culture, to profess and practise their own religion, or to use their own language.”

Abu Amer said he expects the protests to increase and that the Palestinian flag will be raised not only on political occasions, but become a social expression and serve as an existential affirmation.

He recalled that the Israeli military law that was applied in the West Bank and Gaza Strip after the 1967 war and that created stiff penalties for those who lift the Palestinian flag was only applied for a couple of months. The harsh new law will confirm that the Israeli civilian rule is more severe than the military one, he concluded.