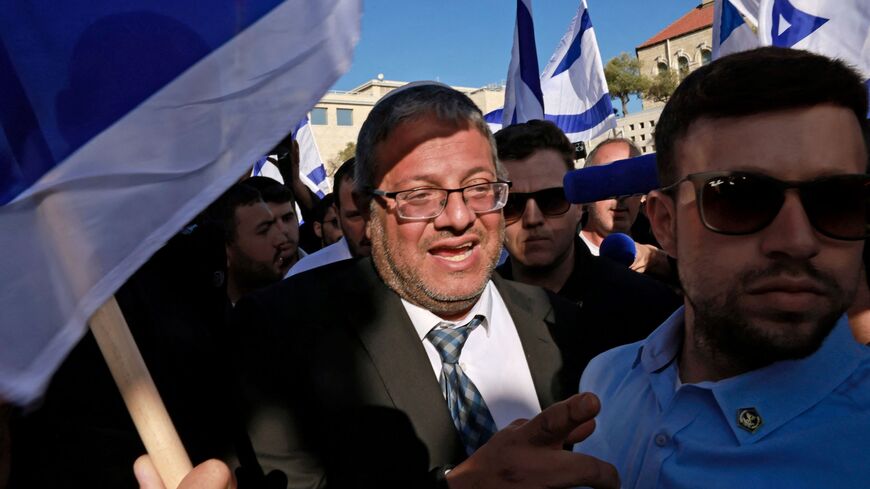 The organizers tried copying the nationalist flag march that traditionally takes place on Jerusalem Day (which marks the city’s unification in 1967), to be celebrated on May 29 this year.

Out of the 200 people who marched this afternoon from the Safra Jerusalem Municipality Square, about 20 activists managed to approach the volatile spot, including Ben Gvir. On arrival, police blocked them from entering the gate, and chased some of them who refused to obey orders to walk away. After a heated exchange with the police, Ben Gvir decided to abandon the march.

Bar Lev said, "The arrival of Knesset member Ben-Gvir at the Damascus Gate at this time … is a provocation that will be a catalyst for security deterioration, to the point of endangering the entire region. Just his arriving there endangers the security of the country, and even causes the police — which is stretched to the limit to continue to maintain order and security — to divert its efforts to unnecessary tasks at this time."

Ben Gvir said yesterday, "I don't take orders from Bennett, Bar Lev and the Shura Council. A day after closing the Temple Mount to Jews under the direction of the Shura Council, Prime Minister Bennett has finally divided Jerusalem and banned the raising of the Israeli flag."

Clashes broke out on the Temple Mount this morning for the fifth day in a week, with Palestinian rioters throwing stones and Molotov cocktails at police officers who were securing the site for Jewish visitors. More than 1,500 Israeli Jews visited the site today, and a total of 3,813 visited during the Passover holiday this week. Unrest started at the compound last Friday when Palestinians threw stones down at the Western Wall Plaza, and barricaded themselves in a building on the compound. Police detained hundreds. Dozens were injured in the clashes that erupted.

Yesterday, thousands of rightwing activists marched to the West Bank settlement Homesh, abandoned by Israel in the framework of the 2005 unilateral withdrawal from the Gaza Strip. At the time, Israel withdrew not just from Gaza but also from four small settlements in the north of the Samaria region. Over the years, settlers have tried reclaiming Homesh and establishing a makeshift yeshiva, despite legal interdiction. Last December, a Palestinian assailant killed Yehuda Dimentan just outside of Homesh.

Head of the rightwing Religious Zionist party Bezalel Smotrich said yesterday at the march, "We came to commit to settling all areas of the Land of Israel."

Dozens of Palestinians were injured in clashes with IDF near the roads leading to Homesh. The IDF had said on Monday it did not have the manpower to secure the march, but at the end, did secure it. Palestinian rioters arrived to the locations where the army blocked the roads to let the march pass by, and threw stones and burning tires toward the Israeli forces.