The High Court court ordered that the traditional — and provocative — Jerusalem Day Flag March be replaced with a human chain and a smaller celebration by the Western Wall. 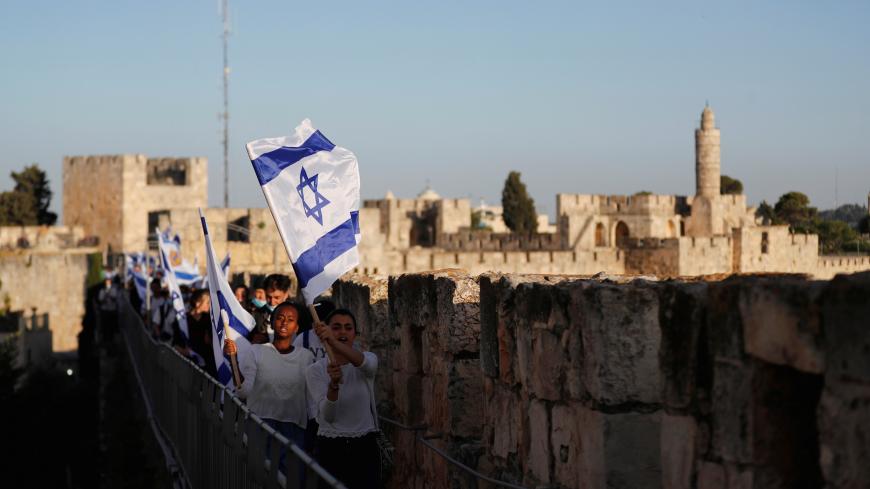 On the evening of March 21, Israelis created a human chain around parts of Jerusalem’s Old City in an event that replaced the traditional annual Flag March for Jerusalem Day, which celebrates the 1967 unification of the city after the Six-Day War. Coronavirus restrictions also meant that a smaller-than-usual celebration was later held by the Western Wall.

The Flag March — or Flag Dance — is a particularly sensitive event politically. Not only does it celebrate Israel’s sovereignty over both East and West Jerusalem, the march also crosses the Old City through the Muslim Quarter on the way to the Western Wall.

The march is considered a volatile and high-risk event and involves a large number of security forces. Many of the marchers are religious teenagers and the Old City’s Muslim Quarter route has frequently been the source of tensions. Vendors in the Muslim quarter are usually told to close early, and Muslim residents are careful to stay home as the nationalist marchers pass by. Marchers have been known on occasion to shout obscenities at Arab shopkeepers. Shops have been damaged and there have been clashes between Israeli Jews and Palestinians during the marches.

Over the years, left-wing associations repeatedly asked the High Court to prevent the march, which hurts the feelings of many Israeli-Arab citizens. But while the court on some occasions has order a change in the route of the march in order to minimize friction with Jerusalem’s Muslim residents, the event itself was always held.

The Flag March became over the years a principal event for the national-religious movement. Before the march starts, Merkaz HaRav Yeshiva, considered the main bastion of religious Zionism, usually holds a large celebration. Leaders of the community and other political figures flock to this annual event. In fact, Prime Minister Benjamin Netanyahu has participated on several occasions.

As in prior years, the Ir Amim organization petitioned against the march, particularly since the march this year falls shortly before the end of Ramadan. But contrary to past years, the organizers of the march also petitioned the court this year. They feared that because of restrictions caused by COVID-19, the march would be canceled. Eventually, the organizers came to an agreement with the police where 700 people (instead of the 3,000 demanded in the petition) would be allowed to form a human chain around many of the Old City gates. In addition, the police authorized a convoy of vehicles that would drive around Jerusalem and circle the Old City. Also, 450 people who registered in advance would then be authorized to gather by the Western Wall for the final celebration.

Coronavirus-induced restrictions this year minimized the frictions between the marchers and Muslim residents of Jerusalem. Still, participants are hoping to go back to a much larger format next year. US Ambassador to Israel David Friedman tweeted the evening of May 21, "Wishing everyone a very happy Yom Yerushalayim — Jerusalem Day. Looking forward to celebrating this great day next year with large crowds and festivities.’’