After the controversial flag march in Jerusalem, new Foreign Minister Yair Lapid tweeted, "It is incomprehensible that people can hold the Israeli flag in one hand and shout 'Death to Arabs' at the same time." 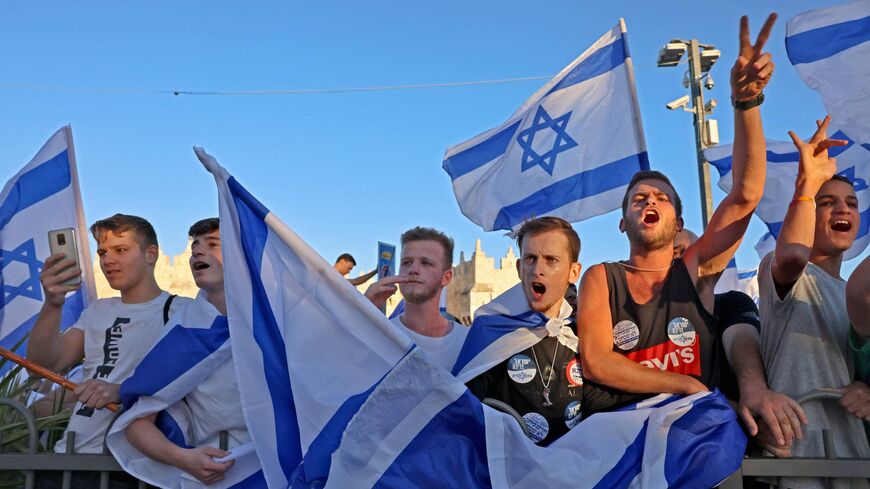 About 5,000 Israelis marched June 15 through the Old City of Jerusalem in the annual Flag Parade organized by the nationalist right. The march usually takes place in May, marking the unification of the city after the 1967 Six-Day war. This year, the march was cancelled when Hamas fired rockets at Jerusalem. The organizers wanted to hold the march June 10, but the security cabinet postponed it to yesterday and required the organizers to reroute it. Defense Minister Benny Gantz argued that on its usual route, the march would provoke clashes with the Muslim residents of the city and a violent reaction by Hamas just ahead of the inauguration of the new government June 13.

Thus the original route of the march was altered. The marchers were permitted to reach the flashpoint Damascus Gate, where they were allowed to dance, but had to enter the Old City through the Jaffa Gate, with some reaching the Western Wall Plaza through the Muslim quarter of the Old City and some through the Jewish quarter. As the march started, clashes broke out near the Old City between police and Palestinian residents, with 33 people reportedly injured. Police arrested 17 people on suspicion of disturbing public order, throwing stones and assaulting police officers.

Several marchers yelled hate slogans against Arabs, chanting, “Death to Arabs,” “Burn down your village,” “Jerusalem is ours” and “Shuafat is on fire,” referring to the Jerusalem Palestinian neighborhood. Participants also denigrated new Prime Minister Naftali Bennett. They called him a “traitor” and held up posters reading “Bennett the liar” for including in the new government the Muslim Ra’am party despite promises not to do so.

Far-right Knesset members, including Religious Zionism’s Bezalel Smotrich, Itamar Ben Gvir and Orit Struck, participated in the march, as did Likud legislators May Golan and Shlomo Karhi. Knesset members from the Joint List rallied outside the Old City to denounce the march. Head of the Joint List Ayman Odeh posted a video showing marchers chanting “Death to Arabs,” calling it a “march of hatred and occupation.”

Israel’s new foreign minister and alternate prime minister, Yair Lapid, tweeted yesterday, “The flag march in its current format had to be approved. I congratulate Public Security Minister Omer Bar Lev on his excellent preparation and organization of the event. Still, the fact that there are extremist elements for whom the flag of Israel represents hate and racism is revolting and unforgivable. It is incomprehensible that people can hold the Israeli flag in one hand and shout ‘Death to Arabs’ at the same time. This isn’t Judaism or Israeliness, and it is definitely not what our flag symbolizes. These people are a disgrace to the nation of Israel.”

Reports yesterday said Israel had asked Egypt to warn Hamas not to fire rockets on Jerusalem again. The new Israeli government clarified that it was not seeking to provoke the Palestinians by authorizing the march, but it will respond firmly if any rockets are fired from the Gaza Strip.

Early this morning, the Israeli army carried out a series of airstrikes against targets in Gaza in response to over two dozen fires ignited yesterday in southern Israel by incendiary devices launched from the Strip.