Is There a Place for Jews In Future Palestinian State?

Anyone who expects Palestinians to welcome Jewish settlements with open arms in their future state should first examine Israel’s attitude toward the Palestinian minority in its own. 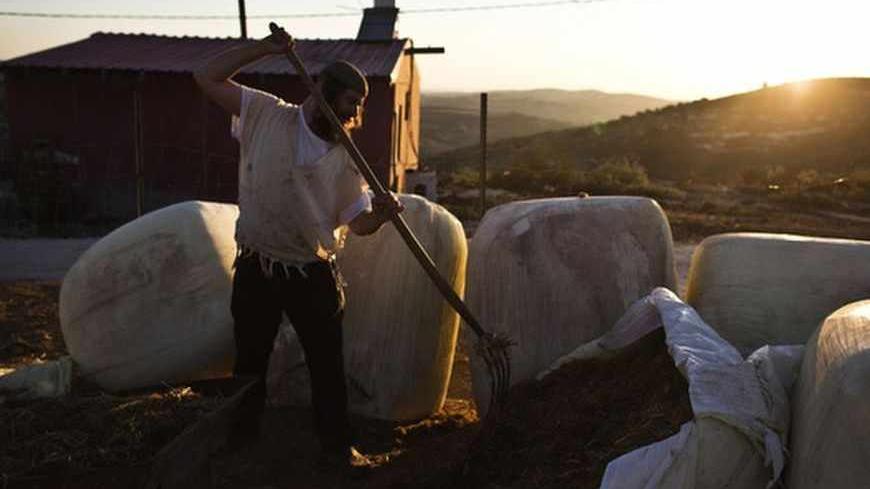 Netanel, an Israeli Jewish settler, works the land outside his home in the unauthorized Jewish settler outpost of Havat Gilad, south of the West Bank city of Nablus, July 29, 2013. - REUTERS/Nir Elias

The right has recently started using the claim of “Judenrein” (German for “an area cleared of Jews”) to spearhead its propaganda against the two-state solution. How is it possible, they ask, tauntingly, that Israel has a 20% Palestinian minority, and yet the Palestinians are demanding to rid the West Bank of all its Jewish residents, down to the very last one?

Responding to the September 2011 statement by the Palestine Liberation Organization’s ambassador to the United States, Maen Areikat, that Palestine should be devoid of Jews, Elliott Abrams, who was an adviser to former president George Bush, told USA Today, "Such a state would be the first to officially prohibit Jews or any other faith since Nazi Germany." He even defined as “an abhorrent form of anti-Semitism” the position of the Palestinian envoy, who told reporters,  “After the experience of the last 44 years of military occupation and all the conflict and friction, I think it would be in the best interest of the two people to be separated.”

The public reservations voiced by Palestinian Authority President Mahmoud Abbas about the idea of absorbing Jewish settlers into a future Arab state of Palestine were met in Jerusalem with stringent Zionist criticism. This criticism appears to have softened Abbas’ unequivocal opposition to the absorption of a Jewish minority in his state. In response to a question from an Israeli reporter who accompanied representatives of the Meretz Party on an Aug. 22 visit to the Palestinian headquarters in Ramallah as to whether he would be willing for some of the settlements to remain in place under Palestinian sovereignty after an agreement is signed with Israel, Abbas said, “These are details that must be discussed” and promised,  “The issue will be placed on the negotiating table and we’ll address it with an open mind.”

Had I been in his shoes, I would have added, "If Israel insists we leave the settlements in our country, our parliament will translate into Arabic all of your laws designed to safeguard Israel’s Jewish majority and Jewish identity. In addition, I promise the settlers similar treatment to that which you Israelis grant the non-Jewish minority living under your sovereignty."

In addition, the Palestinian parliament can copy and adapt Israel’s 2002 Citizenship Law and decree that if the partner of a Jewish resident of Palestine is a Jewish resident of Israel, he or she will not be eligible for residency or citizenship in Palestine. Palestine will also adopt the concept of the Nakba Law and will impose sanctions on Jewish settlements celebrating Israel’s day of independence or mourning the peace agreement that ended the era of Israeli occupation.

According to an analysis conducted by Adalah (the Legal Center for Arab Minority Rights in Israel), these are just some of the 55 Israeli laws that discriminate against the state’s Palestinian citizens, whether directly or indirectly. And Israel’s Knesset members are not done yet in this regard.

It’s ludicrous to draw parallels between the Palestinian minority in Israel and a Jewish minority in Palestine. A pattern of discrimination has become entrenched in Israel since its founding in 1948, including the expropriation of lands owned by Arab citizens for Jewish settlement. In its 65 years of existence, the state of Israel has established some 600 local Jewish councils and municipalities, and not a single Arab village, town or city.

There is a chronic shortage of clinics and hospitals, schools and kindergartens in Arab towns and villages. Official data published in 2004 indicate that school budgets allocated to Jewish children are three times those allocated to Arab ones. The compulsory education bill stresses Jewish history and culture. The state allocates resources to its Jewish citizens as a privileged majority by creating “areas of national preference” and using military service as a criterion for resource allocation.

The policy of discrimination, designed to ensure a Jewish majority, is especially evident in Jerusalem, where Palestinian residents were annexed by Israel, which takes pride in the city’s “unification” under a single flag. Here is a sampling of data compiled by the Association for Civil Rights in Israel on the occasion of the last annual “Jerusalem Day”:

There are 371,844 Palestinians living in Jerusalem, constituting 39% of the city’s population. Of this, 79.5% subsist below the poverty line (85% of them children), and 25 “infant wellness” clinics function in Jewish west Jerusalem and only four in the east. Some 80%-85% of the adults and 90% of the minors who require mental healthcare do not receive it. Three welfare offices in the east handle about a third of the city’s population, compared with 18 in the west. A social worker in east Jerusalem has double the case load of a social worker in the western part of the city. Only 46% of Palestinian children attend official city schools because of an ongoing shortage of over 1,000 classrooms in the municipal school system, and some 40% of 12th graders drop out of school.

Anyone have a problem with that?