The reality of impoverished, neglected and undeveloped East Jerusalem is a far cry from the glossy image of the city presented at the celebration of 50 years of unification. 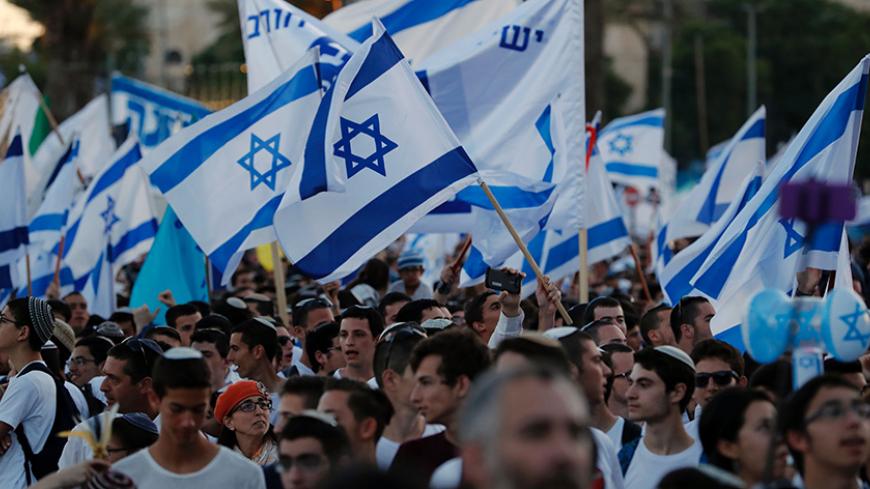 Far-right Israeli supporters wave the Israeli flag as they demonstrate in front of the Damascus Gate in Jerusalem's Old City to commemorate Jerusalem Day, marking the establishment of Israeli control over the Old City following its capture in the Six-Day War of 1967, Jerusalem, May 24, 2017. - THOMAS COEX/AFP/Getty Images

At the official ceremony on Ammunition Hill to mark the 50th anniversary of Jerusalem's reunification, President of Israel Reuven Rivlin said, "We can't sing the praises of a united Jerusalem in which 40% of the population live in what is the most impoverished urban area in Israel. We must not accept that 50 years after the reunification of the Jerusalem, the situation of Jerusalem, capital of the State of Israel, has declined, so that it is now ranked among the lowest socio-economic clusters in the country." Not for the first time, Rivlin’s remarks interrupted a series of impassioned cliches May 24. As has happened before, the president told Israelis the way things really are.

Rivlin had shown the same courage during the Holocaust Memorial Day ceremony exactly one month earlier. At that event, he pleaded with Israelis to stop using the Holocaust as "the prism through which we view the world," to steer clear of a tendency toward victimhood and to adopt a perspective based on inner strength and self-confidence.

This week, the Jerusalem-born Rivlin, a member of the Likud, presented Israelis with an unflattering view of what is actually happening in the capital city. He did not bring up partition, nor did he doubt for a moment that Jews have historical and emotional ties to the city. What he did tell them about was the city's 323,000 Arab residents, who live in poverty and neglect in East Jerusalem's neighborhoods. It is hard to recall another speech at an event like this in which an official figure dared to taint the celebrations with a message so important and so sad.

The jubilee celebrating Jerusalem's reunification was marked by relatively few problems. This year, organizers tried to make the event more grandiose than usual. The budget for the main parade, known as the "Dance of the Flags," was increased from 300,000 to half a million shekels (from $84,000 to $140,000). A record 60,000 people participated in the march, which passed through the main streets of East Jerusalem for the first time in years. In the past, police had kept it off that route out of concern for a possible eruption of violence between Jewish marchers and local Arab residents. This year, the police increased their presence along the route significantly to secure the marchers, many of whom were young people from the religious Zionist sector.

"The biggest Israeli flag ever," measuring 180 square meters (2,034 square feet) and weighing 40 kilos (88 pounds), was flown on Ammunition Hill, a symbol of Israel's victory in the Six-Day War. Reminiscent of Culture Minister Miri Regev's Jerusalem gown on the red carpet at the Cannes Film Festival this month, it showed excessive nationalism and a lack of self-assurance, rather than confirmation of Israel's right to the city.

The powerful trends underway in Jerusalem 50 years after its reunification should alarm all Israelis, regardless of their religious or political affiliation. The current political leadership, including the center-left, is in no hurry to tell the public the truth about the city. Ever since 1967, Arab population growth in Jerusalem has outpaced Jewish population growth. This means that some 323,000 people live in an impoverished environment with serious sanitation problems. It should be noted that these same people have the status of Israeli residents, with the right to vote in municipal elections. If they decide to organize themselves politically, they could have a decisive impact on the selection of the city's mayor. A report by the Association for Civil Rights in Israel based on data from the National Insurance Institute noted that some 76% of people in Arab neighborhoods (and 83% of children there) live below the poverty line.

According to the Central Bureau of Statistics, Jerusalem is home to 833,000 people, 63% of whom are Jews. Negative migration continued in 2017. Just 21% of the city's population describes itself as secular.

The year began in Jerusalem with a municipal strike led by Mayor Nir Barkat, who claimed that the Finance Ministry withheld funds allocated to the city, which is in a deficit. For days, trash piled up in the streets and there was pandemonium in municipal offices.

In 2016, Haim Ramon, a former minister for Jerusalem Affairs, introduced a plan called "Saving Jewish Jerusalem," advocating for its separation from the Arab neighborhoods in the eastern part of the city. Ramon's arguments included the claim that such a step would lead to a dramatic improvement in the economic and security situation in Jerusalem. In an interview with Al-Monitor at the time, he said that his proposal, which included the construction of a fence, would improve security and alter the demographics: “From a situation of 60% Jews and 40% Palestinians, we will move to a ratio of 80% Jews and 20% Palestinians.” Furthermore, Ramon noted that the country would save the 2 billion to 3 billion shekels ($559 million to $839 million) per year that it now allocates to East Jerusalem for education and national insurance payments. That money, he said, could be used to make Jerusalem thrive instead of languish in deficit.

Ramon's proposal failed to win any significant public support. While this loss can be attributed in part to internal divisions, the main issue was that the gamut of politicians from center-left to right consider any concessions in Jerusalem taboo.

Ever since the 1993 Oslo Accord and the 2000 Clinton Parameters, the partition of Jerusalem has been raised more than once during negotiations with the Palestinians. In general terms, the proposal involves the transfer of control over certain neighborhoods of East Jerusalem to the Palestinians and reaching an agreement over who will be responsible for the holy sites. In the summer of 2000, while attending the Camp David Conference together with PLO leader Yasser Arafat, then-Prime Minister Ehud Barak put the partition of Jerusalem on the table. At the time, opinion polls showed that Israelis would be willing to accept concessions in their capital in exchange for an end to the Palestinian-Israeli conflict.

In 2008, Prime Minister Ehud Olmert made an even more generous offer to the Palestinians. In an interview with Newsweek in 2009, Olmert revealed that he proposed to Palestinian President Mahmoud Abbas that the "Holy Basin" would be under no one's sovereignty. Instead, it would be administered by an international consortium made up of Saudi Arabia, Jordan, Israel, the Palestinians and the United States.

The proposal for an exchange of territories suggested by Defense Minister Avigdor Liberman also includes the Arab neighborhoods of East Jerusalem. On the other hand, apart from Liberman, almost no other elected Israeli politicians will speak openly about the partition of the city, out of fear that the public will accuse them of being unpatriotic. While they may be right, it is obvious to just about everyone that some kind of partition will be an essential component of any future peace agreement with the Palestinians.