Is Trump pushing Abbas to dismantle the Palestinian Authority? 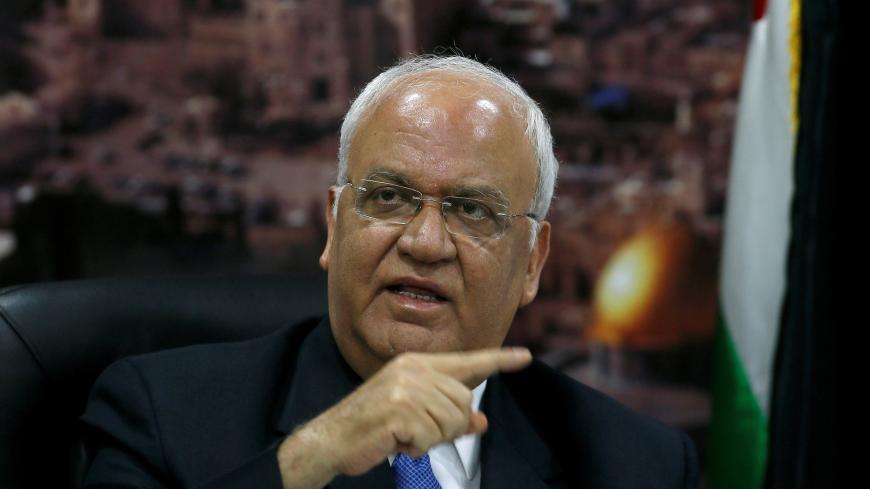 “Today President Donald Trump cut American support for the Augusta Victoria and Muqasad hospitals, about $20 million in total, and that’s after he cut $368 million from [the UN Relief and Works Agency for Palestine Refugees] and $200 million from the Palestinian Authority and I tell you that in the end, it will be Israel to pay the price. You will be the ones to pay the salaries of the Palestinian Authority’s clerks, you will underwrite the schools and roads and health clinics and hospitals and pay wages of the doctors and nurses. Your children will go back to chasing our children in refugee camps.” That is what senior Palestinian official Saeb Erekat told Al-Monitor on Sept. 8 in his office in Ramallah.

Erekat, in a mood more combative and apocalyptic than ever before, forgot his diplomatic language and spoke from the heart. “President Mahmoud Abbas has two choices: He can either fight for his honor and his legacy, or he will be thrown by the Palestinian people from his office. Are you keeping track of what Trump is doing to us? You know that the only cancer treatment center [for Palestinian patients] is at the Augusta Victoria, and now, because of pressure by [Prime Minister Benjamin] Netanyahu, they have cut off $5 million that kept this center alive. You can take it out on Abbas, you can take it out on me, but why harm simple citizens, their hospitals, clinics, welfare centers? That is simply unprecedented. And what’s going on in Israel? Nothing. You are deaf, dumb and blind, completely disinterested.”

It took Erekat, the Palestinians’ chief negotiator vis-a-vis Israel and the United States, quite some time to express his deep frustrations over the situation. He hinted more than once that Abbas is ready to declare the dismantling of the Palestinian Authority or, put more simply, to “give the keys” back to Israel.

“Abbas is slated to deliver a speech on Sept. 27 to the PLO’s Executive Committee. I am certain that what he will say will interest you,” Erekat said. Although Erekat refused to say so explicitly, he hinted that Abbas will return the Palestinian Authority keys back to Israel.

According to Erekat, “Abbas will have to come up with the merchandise. I am secretary-general of the PLO and I tell you that if he doesn’t deliver by the end of the committee’s session, I myself will submit my resignation. I intend to fight for my honor and my dignity. I am a man of peace, I am familiar with Israel, I have always opposed terror and violence and will keep opposing. But that doesn’t mean that I’m willing to become Israel’s collaborator or Trump’s collaborator. You need a wake-up call. Perhaps if you go back to paying our services, caring for our welfare, our health and our sanitation, you will finally realize that.

“I sat with Trump’s team 35 times. I have documentation for each meeting. I demonstrated unprecedented patience. I have never in my life endured an experience like this. From the very beginning I asked [US envoys] Jared Kushner and Jason Greenblatt to set up a meeting for me with my Israeli counterparts. They refused. I asked them to let us conduct direct negotiations. They refused. On May 3, 2017, I received a personal promise from President Trump in the White House. He told me that he would allot one year to the peace process, and afterward, any of the parties that torpedoes the peace process would pay the price. ‘There will be severe repercussions for that,’ he said, and I smiled. When he asked me why I was smiling, I told him that it’s the first time an American president threatens that Israel will be held responsible and subject to severe consequences. From our point of view, that’s a good thing. But I asked him to promise me one thing: According to Article 7 of the interim agreement, neither side can carry out unilateral actions that can adversely affect a permanent agreement. I asked the president if he can promise us that he won’t carry out such steps. I told him, I’m listening to you, I’m listening to [Netanyahu’s associate, American billionaire] Sheldon Adelson, to Ambassador Nikki Haley and I’m asking you to promise not to touch the explosive issues, mainly Jerusalem, before we enter negotiations. And he promised.

“On Nov. 30, I was in the White House again. I sat with the president’s team. The next day the president was supposed to sign the waiver, the presidential directive that delays relocation of the US Embassy to Jerusalem by six months. I told them that the president was scheduled to see Abbas on Nov. 5, they are already working on the meeting now. Then, Kushner said that evidently the president would not sign the waiver. I asked him if they planned on recognizing Jerusalem as the capital of Israel, he answered that they make their decisions based on American interests and policies. I made it clear to them that if such a thing will take place, they can no longer serve as honest broker. Kushner said to me, ‘Don’t threaten us.’ I said to him, Mr. Kushner, do you think I can possibly threaten you? We’re not even a state, you’re a super-power. Bilateral trade between us stands at $5 million [annually]. We’re trying to bring about peace and you accuse us of threats.”

Erekat reconstructed this harsh conversation as if it took place yesterday. “If you cut off our funds, Israel will pay the price. It’s a rich country; it can take it. For the past 24 years Israel has been using us. We are paying for all the services offered to the Palestinians. We maintain full security cooperation, while they [Israel] expand the settlements, increase land expropriation and ruin our hope. If you [the United States] don’t want to continue participating in [Palestinian] expenditures at the expense of the tax-paying Americans, you are entitled to do so. That is your decision. But at the same time, you cannot continue to disinherit us, to banish our hopes, our dreams. By doing so, you ruin the moderate camp within the Palestinian people.”

According to Erekat, the Americans told him in conversation: “You don’t understand the change that has taken place in the region.”

“I told them, teach me, I’m a good pupil. They told me not to be sarcastic. I told them, I don’t have a clue what you are referring to. I’m in Washington for three months already [for medical treatment]. Everyone has visited me. Along came [Saudi Foreign Minister] Adel al-Jubeir and [he] told me that [Saudi Crown Prince] Mohammed bin Salman told him that we can talk about everything except for one thing, which we should not even mention: and that is Jerusalem. That is the red line. Afterward along came Ayman Safadi [Jordanian foreign minister] with King Abdullah and told me the exact same things. Afterward came the Qatari and Egyptian foreign ministers. Have you any idea what would happen if Abbas would accept Israeli sovereignty over Al-Aqsa in front of the Arab world? That would be like saying that [Prophet] Muhammad never existed. We Palestinians do not try to subvert the connection of the Jews to the Western Wall, to their beliefs, their religion. So why try to subvert our connection?”

The American administration’s offensive against the Palestinian Authority is at its height. Israel enthusiastically backs up the American political maneuvers. The strategy is to pin the Palestinians to the wall to extract the best possible deal for the Israeli side.

The problem is that this strategy could boomerang. The Palestinians have already threatened to “return the keys” many times. An Israeli source with expertise on the current goings-on told Al-Monitor this week on condition of anonymity: “They will return the keys on the day that the Israeli right will annex the West Bank.” In other words — never. Nevertheless, in light of the rapidly deteriorating situation, the advanced age of Abbas and the T-junction toward which everyone is being pushed — it is recommended to address the Palestinian threats seriously, this time around.