Iranian involvement in the reconstruction of Syria offers Tehran the opportunity to cement its influence, boost its economy and forge closer ties with China. 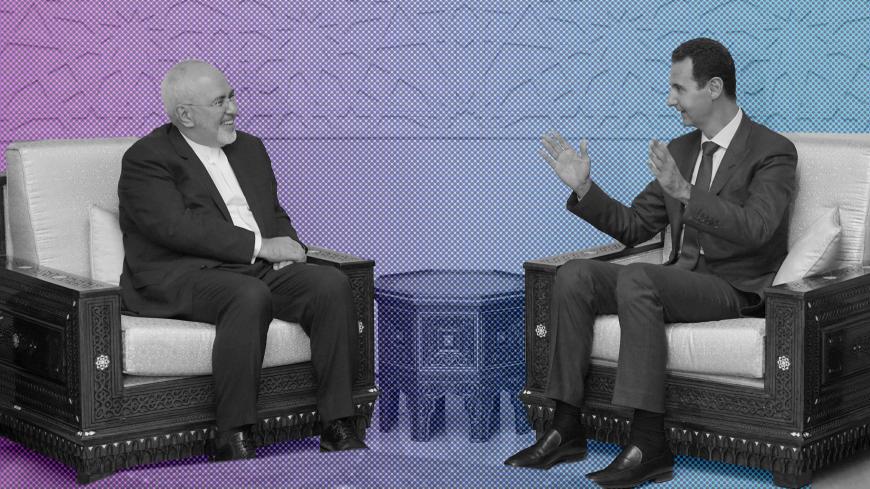 Iranian Foreign Minister Mohammad Javad Zarif paid an official visit to Damascus Sept. 3 to meet with high-ranking Syrian officials and discuss the latest developments in the country. Iran’s role in the process of post-war reconstruction in Syria was a top priority among the issues discussed. At a meeting with Syrian Prime Minister Imad Khamis, Zarif touched upon the idea of participation by Iran’s private sector in Syria’s reconstruction, saying that the two countries’ embassies can facilitate this process.

Iran’s desire to define a serious role for itself in the reconstruction of Syria first came under the spotlight on Aug. 18, when an Iranian economic delegation headed by Iran’s Deputy Minister of Roads and Urban Development Amir Amini visited Damascus for talks on a long-term economic partnership agreement between the two countries.

Although no details have surfaced as to what the two sides agreed upon, an official in Iran’s ministry of roads and urban development on Aug. 31 shared the basics of the agreement. According to Teymour Bashir Gonbadi, director of the ministry’s international affairs department, Iranian companies will be involved in reconstructing Syria’s transportation infrastructure as well as building 30,000 homes in the country. Gondadi also Iran plans to establish a railway connection between Iran and Syria via Iraq, saying that now is an opportune time, given China’s desire to secure railroad access to the Mediterranean within the framework of its Belt & Road Initiative (BRI).

When Iran’s defense minister, Brig. Gen. Amir Hatami, visited Damascus on Aug. 27, it became clear that Iran’s plan for the post-war reconstruction of Syria also has a military dimension. During Hatami’s two-day visit to Syria, the two sides signed an agreement on defense cooperation that includes Iranian participation in rebuilding Syria’s armed forces and military industry.

Iran's strategy for the reconstruction of Syria has specific economic, geopolitical and military aspects. Economically, it's closely linked to Iran’s plans to overcome the negative effects of the US sanctions that were re-imposed after President Donald Trump’s decision to withdraw from the 2015 nuclear deal. Following Washington’s withdrawal from the accord on May 8, many major international companies wound down their activities in Iran and cut ties with the Iranian market to avoid US punishment. As a result, Iran is now counting on small and medium-sized enterprises (SMEs) to continue its international economic activities.

In a speech on June 24, Zarif said that after the US withdrawal from the nuclear deal, European countries have turned to SMEs to continue their economic presence in Iran, as those enterprises have fewer ties with the US market and are less likely to suffer under the US sanctions. According to Zarif, Iran should support Iranian SMEs and connect them with their European counterparts to support Tehran’s economic interests.

Syria’s reconstruction could provide the Iranian private sector and particularly SMEs with an opportunity not only to get involved in profitable business activity abroad, but also to make new connections with other international firms that may take part in that process. It would expand the scope of Iran’s economic ties and could function as a vital artery to keep the Iranian economy alive despite the recent crises.

On the geopolitical level, Iran seems to be trying to build upon its influence in Iraq and Syria and its close ties with China to introduce itself as a key component of China’s BRI, providing an alternative route for Beijing to establish a land corridor connecting Asia to the Mediterranean and further to western Europe. Iran and China have already signed a number of cooperation agreements within the BRI framework. High-ranking Iranian officials including Supreme Leader Ali Khamenei support Iran’s participation in the Chinese megaproject.

Now that Iran faces increased pressure from the United States, being an active part of BRI seems to be of even greater importance for Tehran, as it would place Iran at the center of East-West trade and transportation, making it harder for the United States to isolate Iran internationally. On the other hand, by tying its own economic plans for the post-war period in Syria to those of a great power like China, Iran wants to make sure that its future economic role in Syria won’t be sidelined by potential rivals.

As for the military aspect of Iran’s reconstruction plans for Syria, Iran seeks to preserve its military influence without perpetuating its direct military presence in the country, as doing so would prompt a backlash not only from the United States and Israel, but probably also from Iran’s close wartime ally Russia. However, Iran’s participation in rebuilding Syria’s armed forces would provide the Islamic Republic with the opportunity to integrate pro-Iran armed groups into the Syrian army, thereby formalizing and consolidating its military influence in Syria. It will also allow Iran to guarantee at least a minimal military presence in Syria through “advisory” missions.

All in all, Iran’s recent attempts to play an active role in Syria’s reconstruction suggest that in the eyes of Iranian officials, the war in Syria is almost over and that it is now time to redefine Iran’s role in the country based on new and emerging factors. The pattern of Iran’s alliances and partnerships in Syria may change accordingly, as for example Russia may appear as a potential rival in the reconstruction of Syrian infrastructure, and especially in the energy sector. As a result, one could expect a Tehran-Beijing partnership framework to eventually replace the Tehran-Moscow axis in post-war Syria. Finally, all of these developments indicate that Iran will continue its full support for the Syrian regime, as the realization of the recent agreements depends heavily on the continuation of its rule in Syria for the foreseeable future.