Syria stabilization will instead likely depend on Putin’s shuttle diplomacy with Ankara and Damascus. 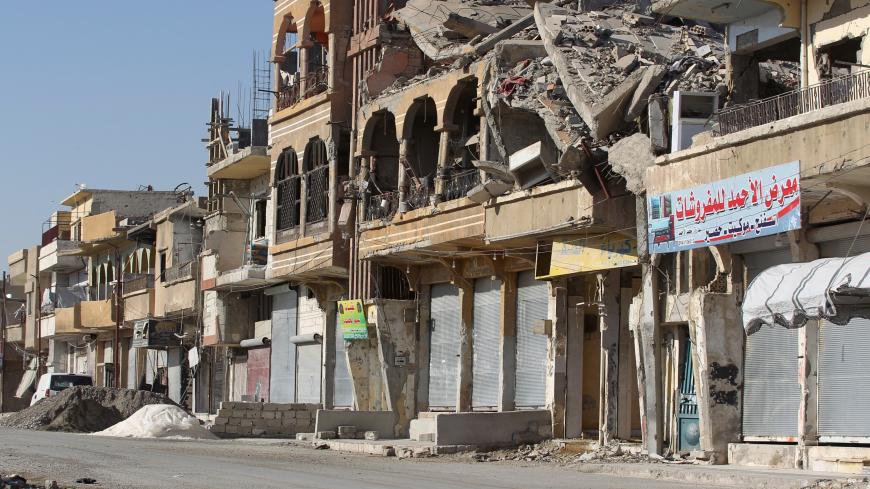 Closed and damaged shops are pictured in Raqqa, Syria, June 24, 2018. Although stabilization assistance for northern Syria is being cut by the United States, it plans for its anti-Islamic State allies to take up the slack. - REUTERS/Aboud Hamam

The Trump administration last week cut $230 million in stabilization assistance for northeastern Syria, instead choosing to rely on “hard contributions” of $300 million from anti-Islamic State coalition partners, including $100 million from Saudi Arabia, as reported by Bryant Harris.

The shift in funding should perhaps spark a broader discussion about how the United States and its coalition partners plan to stabilize, and then reconstruct, northeastern Syria without buy-in from Damascus and Ankara. Old school post-conflict stabilization usually involves a host government partner, and that is not in the cards for Washington as long as Bashar al-Assad is Syria’s president. US-Turkey relations are in free fall because of the Turkish detention of an American pastor and seemingly irreconcilable differences over US support for the Syrian Democratic Forces, which is made up primarily of the People’s Protection Units, which Ankara considers a terrorist organization linked to the outlawed Kurdistan Workers Party.

Given that Syria and Turkey are unlikely to be silent bystanders in northeastern Syria, post-conflict stabilization and reconstruction plans will ultimately need to be reconciled with Russian President Vladimir Putin’s efforts to broker an understanding between his Turkish and Syrian counterparts — the outliers in the American-led approach.

“Although Turkey publicly appears to sustain its anti-Bashar al-Assad stance on Syria, it is actually getting ready for a new Syria that will allow Assad to stay on as the country's president,” writes Fehim Tastekin. “While a termination of the de facto Kurdish autonomy in northern Syria seems to be the first precondition for a possible normalization between Ankara and Damascus, there is another unspoken condition as well: the allotment of a share in Syria’s reconstruction.”

“The Assad administration does not have the intention to allot any share to Turkey, which is accused of supporting anti-regime military groups that have destroyed the country and looted Aleppo's industrial zones,” Tastekin continues. “However, Turkey’s control of a sizable territory in northern Syria and its cooperation with Russia make it difficult for Damascus to exclude Turkey from these calculations. … Turkey’s influence over opposition groups that could have a bearing on the Geneva process cannot be dismissed. Turkey has been able to preserve its most important trading partner position with Syria despite the 7-year-old conflict. Its geographical proximity to Syria, logistical superiority and advanced capacity of its construction sector encourages Turkey to seek a substantial role in the reconstruction process. Moreover, Turkey is currently organizing local entities in al-Bab, Jarablus, Azaz, Cobanbey and Afrin that are de facto under its control. It is also setting up systems for security, education and religion and even issuing ID cards to residents.”

Al-Monitor has provided unmatched reporting and analysis of Russian diplomacy to prevent an escalation between Syria and Turkey over Syrian plans to retake Idlib and on the Russian efforts to broker an arrangement between Damascus and the Syrian Kurds that would ultimately mitigate Ankara’s concerns.

“For the reconstruction of Aleppo, Ankara relies on its negotiations with Russia,” adds Tastekin. “An operation in Idlib and potential withdrawal of Turkish troops from there may well determine the outcome of those negotiations. Ankara hopes that an agreement with Russia on these two issues may overcome the reluctance of Damascus to deal with Turkey. … If the Idlib operation is completed as foreseen and the Kurdish-Damascus dialogue produces positive results, the reconstruction issue will become much more prominent. Although political normalization may take longer, practical cooperation models on the ground are possible.”

Because Russia, Syria and Turkey will ultimately be the deal makers or breakers of stabilization in northeast Syria, the US decision to cut aid could nonetheless allow Saudi Arabia a second wind for its flagging Syrian policies. The preferred Saudi local partners in Syria have been the Jaish al-Islam and Ahrar al-Sham armed groups. Despite their public relations makeovers in recent years, and their undistinguished lumping by most media with any and all Syrian “rebels,” both groups are unabashedly Salafi and deeply sectarian proponents of Islamic law. Jaish al-Islam has been accused of torture, filmed executions and use of human shields and chlorine gas. This column has for years called out the mainstreaming of Ahrar al-Sham, which has been an on-again, off again partner with Jabhat al-Nusra and affiliated groups in Syria, and has been accused by Amnesty International and others of war crimes.

And Riyadh is hardly on a roll in the region. “Erratic diplomacy,” Bruce Riedel explains, “is hurting the kingdom.”

“The first tough decision of the new [Saudi] leadership is still their worst, to intervene in the Yemeni civil war. … Operation Decisive Storm turned into the world’s worst humanitarian catastrophe of our times. The Saudi bombing of a school bus this week is symptomatic of the Saudi coalition’s difficulties in avoiding civilian casualties in launching airstrikes against targets in a poor, backward country. …Two American presidents have colluded in the war, providing political and military support for the Saudi coalition — a black mark on our country. So has the United Kingdom. The war has no end in sight, and the total collapse of the poorest nation in the Arab world is an increasingly likely outcome, according to the United Nations,” Riedel writes.

With regard to Qatar, Riedel continues, “As in Yemen, the Saudi leadership had no concept of how to implement its decision; Riyadh and its allies had a goal but no serious scheme to achieve it. Some reliable evidence suggest that they were planning a military invasion of Qatar but US Secretary of State Rex Tillerson vetoed the plan (probably without President Donald Trump’s knowledge).”

While the kingdom’s relationship with the White House appears strong, Riedel writes, “Congress, on the other hand, is turning against the kingdom, as is the press and the public. [Saudi Crown Prince] Mohammed [bin Salman] is increasingly seen as an autocrat who can't tolerate any dissent, rather than as a modernizer opening up the country. Criticism and dissent is not tolerated, even if it is the dissenting opinion of women who fought for the right to drive in the only country in the world that ever made driving a gender-based issue. ... Foreign direct investment in the kingdom dropped 80% from over $7 billion in 2016 to $1.4 billion in 2017, according to the United Nations, and down from over $12 billion when King Abdullah was still on the throne. Jordan and Oman each attracted more foreign investment last year than Saudi Arabia. The number of companies also fell significantly. Concerns about the rule of law and arbitrary detention are also encouraging capital flight. … The Saudis have gotten little concrete support from their Arab allies in the Canada boycott.”