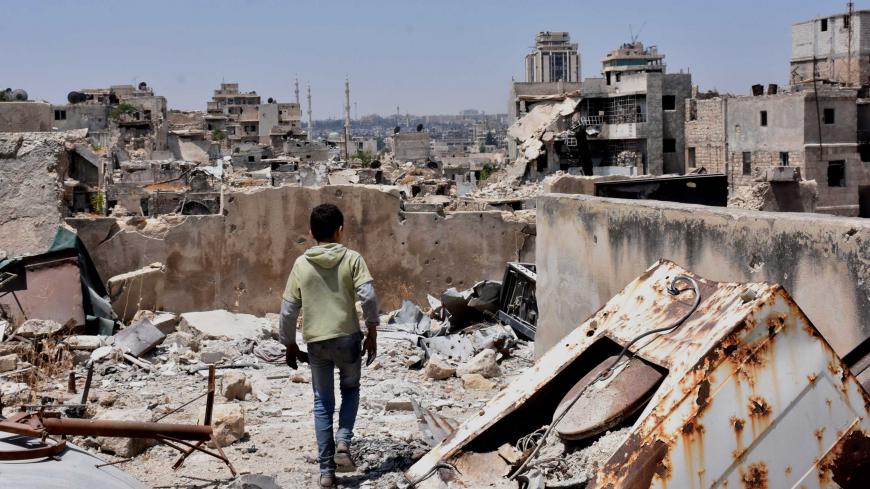 A boy walks amid the rubble of destroyed buildings in the city of Aleppo, Syria, July 22, 2017. - GEORGE OURFALIAN/AFP/Getty Images

Although Turkey publicly appears to sustain its anti-Bashar al-Assad stance on Syria, it is actually getting ready for a new Syria that will allow Assad to stay on as the country's president. While a termination of the de facto Kurdish autonomy in northern Syria seems to be the first precondition for a possible normalization between Ankara and Damascus, there is another unspoken condition as well: the allotment of a share in Syria’s reconstruction.

Naturally, the Assad administration does not have the intention to allot any share to Turkey, which is accused of supporting anti-regime military groups that have destroyed the country and looted Aleppo's industrial zones. However, Turkey’s control of a sizable territory in northern Syria and its cooperation with Russia make it difficult for Damascus to exclude Turkey from these calculations.

Turkey’s influence over opposition groups that could have a bearing on the Geneva process can not be dismissed. Turkey has been able to preserve its most important trading partner position with Syria despite the seven-year-old conflict. Its geographical proximity to Syria, logistical superiority and advanced capacity of its construction sector encourages Turkey to obtain a substantial part in the reconstruction process.

Moreover, Turkey is currently organizing local entities in al-Bab, Jarablus, Azaz, Cobanbey and Afrin that are de facto under its control. It is also setting up systems for security, education and religion and even issuing ID cards to residents. In addition it has started building a road network.

Manbij, which Turkey has begun patrolling the periphery of following an agreement with Washington, is also in the works. If Turkey can impose its control over the area, a new highway will be built between Jarablus and Manbij. In fact, local sources have confirmed that the construction work has already started.

The Turkish government sees Manbij as a key trading hub both for Iraq and Syria, and Manbij and al-Bab will be preludes to the rebuilding of Aleppo. This de facto situation created by Turkey will likely be a stepping stone to lucrative reconstruction contracts.

Ankara’s entire calculations are based on getting the reconstruction contract for Aleppo. But will Russia and Iran, which also have spent billions of dollars in Syria, allow Ankara to get what it wants?

For the reconstruction of Aleppo, Ankara relies on its negotiations with Russia. An operation in Idlib and potential withdrawal of Turkish troops from there may well determine the outcome of those negotiations. Ankara hopes that an agreement with Russia on these two issues may overcome the reluctance of Damascus to deal with Turkey.

A foreign technocrat who is closely involved in the reconstruction process of Syria said that Assad considers the reconstruction process an “extremely delicate” issue. He told Al-Monitor on condition of anonymity, “Contacts are top secret at high levels. Assad insists that those who had a part in destroying Syria cannot have a role in its reconstruction and he prefers Russian, Iranian and Chinese firms. Can Russia persuade Damascus to allot Turkey a portion?”

He added, “In principle Syria doesn’t want to give Turkey anything. But there are three important facts. The Russians understand the Turks and the economic dimension is on the agenda of Moscow-Ankara talks. If you ask any Russian official, he will say that Turkish companies are important for the quick reconstruction of the destroyed towns — thus acknowledging the importance of Turkish contractors in large-scale construction projects. Then you have the facts on the ground. In 2017, 150,000 heavily laden trucks entered Syria from Turkey. Everything sold in northern Syria comes from Turkey. … The third fact is that eastern Aleppo — which the government liberated two years ago — still lies in rubble.”

He noted that China can be an important alternative to Turkey, but that the Chinese are reluctant to commit themselves to major investments before any political settlement is agreed on. Beijing does not want to take the “wrong side” while Moscow and Washington are still “arm-wrestling,” he added.

The source also indicated the indirect contacts between Ankara and Damascus. “There are open channels in the background and the most important one is via Russia. Many issues are negotiated but neither country is in a position to reveal them. Anyone with the right mind in Damascus has to admit that if you want to rebuild Syria quickly, secure the return of the refugees and ensure normalization, they have to acknowledge the role of Turkish companies,” he said.

The business prospects are significant. According to the UN Economic and Social Commission for Western Asia, the total cost of Syria's reconstruction will be some $388 billion. Assad estimates $400 billion is needed for the reconstruction process.

One key factor that will determine the reconstruction process is the support from the international community; where are the funds coming from and who will get a slice of the cake? Even the $9.6 billion humanitarian assistance pledged by the Friends of Syria Group in 2017 is dependent on a successful political transition.

Syria’s reconstruction was on the agenda of the meeting between US President Donald Trump and Russian President Vladimir Putin at the Helsinki summit July 16. Russian Chief of the General Staff Gen. Valery Gerasimov sent a letter to his American counterpart, Joseph Dunford, July 19 proposing cooperation in the reconstruction process. Yet Dunford replied they could not cooperate before a general election under UN supervision is held and a political transition is achieved.

The European Union's High Representative for Foreign Affairs and Security Policy Federica Mogherini also said if progress is achieved in the UN peace process, the EU would be ready to contribute.

Naturally, countries that contribute financially will want to have a say in the process. According to the high-level technocrat source, Russia is trying hard to turn the attention of the United States and the EU to the post-conflict phase; Russian experts are convinced that unless there is financial and political support soon, Syria will shortly become a bankrupt state. EU members who have agreed that Assad is staying are aware of the perils of a bankrupt state and want to see some change. Syrians who count on Iran, Russia and China are aware that they are not going to receive more than $10 billion from the international community. That's why their only hope are the Syrian people.

“In order to mobilize the Syrians first have to build the people's confidence and offer them guarantees. The qualified and young population must be encouraged to return home. Idle government bodies that can’t even spend more than 20% of their own budgets because of their dismal capacities and bad management must be reactivated and the private sector must be allowed to operate,” the source said.

If the Idlib operation is completed as foreseen and the Kurdish-Damascus dialogue produces positive results, the reconstruction issue will become much more prominent. Although political normalization may take longer, practical cooperation models on the ground are possible.