The municipality of the Turkish city of Kilis held a training for Syrian engineers in Syria’s Euphrates Shield area to help develop municipal services. 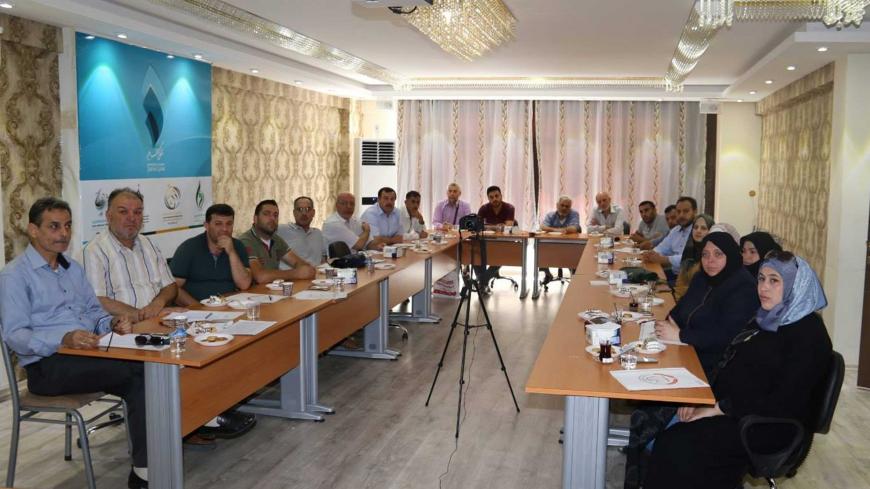 ALEPPO, Syria — Turkey’s Kilis municipality held training sessions for a number of Syrian engineers in the Euphrates Shield area in the countryside of Aleppo from Aug. 3-6 at the headquarters of the Azaz local council. The training was held in cooperation with the Syrian Engineers Organization for Reconstruction and Development and the Shafaq Sham nongovernmental organization.

Twenty-five Syrian engineers from the Euphrates Shield area received free training in various fields, including the development of networks for sewage, water and electricity and methods of developing the municipal services sector. The training aims to transfer the expertise of the Turkish engineers in the municipal sector to Syrian engineers and contribute to the Euphrates Shield area’s future development with the support of the Turkish government.

A number of Turkish engineers supervised the training program. The director of the cultural center in Kilis municipality, Mahmut Selcuk, was the general supervisor of the training course held in Azaz. Assisting him were Kilis' planning director, Murat Bilecen, who is an architect, Kilis' project manager Huseyin Azmi Dokuzluoglu, who is a mechanical engineer, and Kilis' water director Begum Bostanci.

In addition to lectures given in Turkish and interpreted into Arabic, lectures were also given in Arabic by two Syrian engineers, Abdullah al-Sagheer, the head of the Syrian Engineers Organization for Reconstruction and Development, and Mohammad Wisho, a member of the organization's board of directors.

Wisho told Al-Monitor, “Turkish engineers have extensive experience in the municipal services sector and the development of sewage, water and electricity networks, in addition to other services. In cooperation with Kilis municipality, we wanted to transfer experiences and expertise to the Syrian engineers in the Euphrates Shield area in order to develop the municipal sector so that Syrian citizens can have access to better services.”

He added, “The Euphrates Shield area is in dire need of securing drinking water for homes in its cities and towns. Drinking water networks topped the priority list that was highlighted during the training and we expect an improvement in this aspect during the coming period through the experience gained by the Syrian engineers. It then comes down to local councils in the area, which must cooperate with engineers to develop the service sector.”

There are no abundant water sources in the Euphrates Shield area to secure a constant water supply. Most cities and towns in the area rely on artesian wells. Since the outbreak of the Syrian revolution in early 2011 and until now, water networks, sewage systems and other facilities have been destroyed due to aerial bombardments and battles, not to mention neglect.

Turkey began Operation Euphrates Shield on Aug. 24, 2016, against the Islamic State in the countryside of Aleppo. The Free Syrian Army (FSA) and the Turkish army took control of the area on Feb. 23, 2017. It was only then that municipal services started improving in general, after local councils were formed with the support of the Turkish government. Local councils then started receiving direct support from Turkey to further develop the service sector.

Sagheer told Al-Monitor, “Training workshops for Syrian engineers in this area will carry on for the coming months. Our training will target 200 engineers working in several service sectors. We took the structure of services in Kilis as a model to try to replicate in this area, particularly in terms of water treatment plants, water networks, water resource management and sewage systems.”

He added, “The governor of Kilis and Turkish officials there have shown great interest in our training sessions. Our purpose is to meet Syrian engineers in the area and develop their skills with the help of Turkish engineers so we can employ them for projects that Turkey supports in the area.”

Sagheer said, “We hope for more Turkish support for the local councils in the Euphrates Shield area and Afrin in the countryside of Aleppo. Local councils here need this extra support so they can implement large service projects and repair sewage and water networks. In addition, a greater financial support allows local councils to hire trained Syrian engineers in various service sectors.”

Mohammad Omar, the director of the service office for the Azaz local council and who attended the training, told Al-Monitor, “The training was very useful for us as Syrian engineers working in the service sectors in Aleppo’s countryside. We can benefit from the Turkish experiences in the development of electricity, water, roads, sewage networks and other service sectors. The Turkish engineers have given us a great experience and we hope that these sessions will be repeated and include as many Syrian engineers as possible in the north of Syria.”