Moscow claims it's making progress in talks with Jordan, Lebanon and Turkey over the return of Syrian refugees; yet getting international organizations and the United States to cooperate on the refugee return and the reconstruction of Syria proves more challenging. 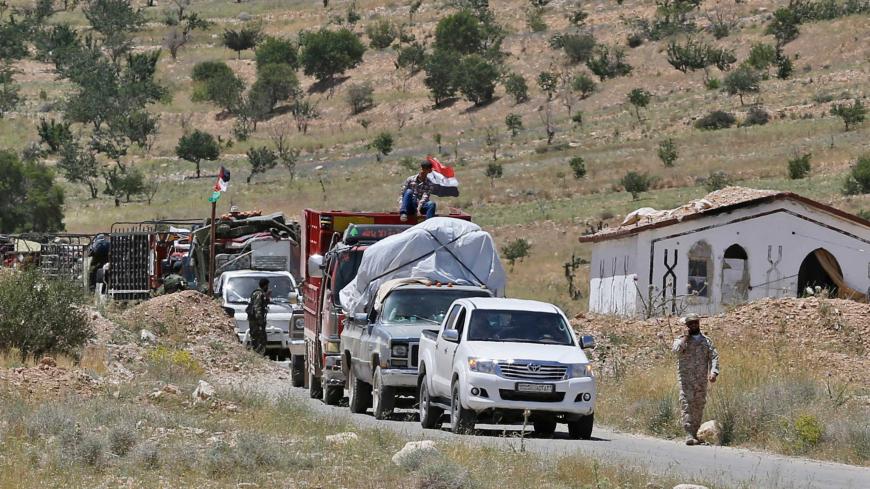 A convoy of Syrian refugees passes through al-Zamrani crossing and arrives in Syria after leaving the eastern Lebanese border town of Arsal, June 28, 2018. - LOUAI BESHARA/AFP/Getty Images

MOSCOW — As Russia has been gradually moving from a military to a comprehensive political campaign on Syria, one of the primary issues on the agenda for Moscow is the return of refugees. The agenda pierces through current Russian engagements with regional states, overtures to foreign governments and outreach to international agencies. The three dimensions reflect Russia’s threefold intent at this point: stabilize Syria; reinforce its own regional profile of a capable actor and a reliable counter-partner; chart out areas of cooperation with the United States and the European Union. Yet the degree of success Moscow has had working along the three paths varies significantly.

“I think we’ll see their results in the short term," Lavrov noted.

The Russian Foreign Ministry names a figure of 1.7 million people who are allegedly willing to return to their homes in Syria.

At different levels Moscow stresses cooperability of regional governments with Russia’s efforts toward the refugee return.

“About 890,000 Syrian citizens can return to their home country in the coming months,” said the head of Russia’s National Defense Control Center, Col. Gen. Mikhail Mizintsev, referencing data by the United Nations Office for the Coordination of Humanitarian Affairs.

"Lebanon’s government has established a working group to set up a joint committee on cooperation with Syria in matters concerning the return of refugees. Lebanese regional refugee centers have reported receiving about 10,000 applications from Syrian citizens [seeking] to return to their home country," he added.

Jordan too has been actively facilitating the return of refugees.

"The government of the Hashemite Kingdom has taken a number of steps that have encouraged more than 200,000 Syrian citizens to express a wish to return to their places of permanent residence. All this is happening amid the Syrian army’s successes in regaining control of the country’s border with Jordan," Mizintsev said.

While working with regional states has so far been rather successful, getting international agencies on board with Russian initiatives has proved much more challenging for Moscow.

"We have an interested response [from the Humanitarian Affairs Office] and at the level of the Office of the United Nations High Commissioner for Refugees, which was outlined by the deputy high commissioner in Sochi at the Astana format meeting on July 30-31. As for other UN agencies, we have a feeling — which we would like to double-check — that they are guided by the West’s stance and wait until this position changes," Lavrov stated.

"So far, we have seen no UN employees in the areas controlled by the government where assistance is needed to restore the destroyed life-support systems. I hope this is a false impression, this could be a mere coincidence," Russia’s top diplomat argued.

Lavrov’s remarks reflect an underlying problem Moscow encounters: getting interested EU and US parties to cooperate on issues they — at least the Europeans — have long claimed they care about.

On Aug. 4, Russia’s Defense Ministry confirmed it had proposed cooperation to the US military on Syrian refugees and joint demining efforts in Raqqa. On July 19, shortly after the Helsinki summit between Russian President Vladimir Putin and US President Donald Trump, head of Russian military’s General Staff Gen. Valery Gerasimov used a closely guarded bilateral communications channel to send a letter to US Gen. Joseph Dunford, the chairman of the Joint Chiefs of Staff.

The letter from the top Russian general reportedly included Moscow’s proposals to discuss with Damascus safety guarantees for refugees stranded at Rukban, as well as creating conditions for their return home.

The Rukban refugee camp lies within 55 kilometers (34 miles) from the so-called deconfliction zone set up by the United States to provide safety for its troops deployed near the Iraqi-Syrian border. The camp has long been a serious concern for the pro-Assad coalition, with Russia accusing the United States of “setting up a terrorist reserve” in the facility.

A second set of proposals in the letter, according to the Russian military, concerned “coordination of humanitarian demining, including in Raqqa, and other priority humanitarian issues.” The proposal itself is not really new since Moscow has long been advocating cooperation in Raqqa as a starting point for practical cooperation between the two countries and a trust-building measure.

Another point on the proposed agenda in the letter had to do with Syria’s reconstruction in light of lack of fuel, equipment, construction materials and funding. Russia would want the United States to either contribute what’s needed directly or use its power and leverage in getting it from international agencies. The United States, in turn, has long argued the reconstruction should be linked to a process of political transition in Syria and UN-supervised elections.

A source in the Russian Foreign Ministry who was speaking with Al-Monitor not for attribution said the United States and Europeans should recognize their own responsibility for the conflict in Syria.

“When they say, 'You [Russia, Iran and Assad] destroyed the country, now you fix it,' our response is, 'How many Western nations are to blame for the destruction of Syria?' We are prepared to contribute our share, but it’s clear they must contribute theirs,” he argued.

He noted that America’s reluctance to cooperate with Russia on efforts of refugee return plays to the detriment of its own policies in the Middle East.

“We have succeeded in getting many nations on board to work on things that are important to them. When it comes to refugees, security and economy are important drivers for their willingness to cooperate. America is standing there alone discouraging even those Europeans who are genuinely interested in some cooperation with Russia from doing so. It shows how deep the frustration and distrust of us are within their decision-making circles.” he said.

The source added, "Does it create a problem for our initiatives? To some extent, but only in that if the United States agreed to cooperate, it would send a positive impetus to others. But we are set on a path that they [the United States] cannot reverse. We will continue doing what we are doing on our refugee policies and other things. There will be other nations and bodies interested in reconstruction and at the end of the day America will find itself isolated by its own 'reluctance-and-aloofness policy.'"