On his visit to Moscow, Lebanon's foreign minister expressed support for a Russian initiative on the return of Syrian refugees, but its implementation is easier said than done. 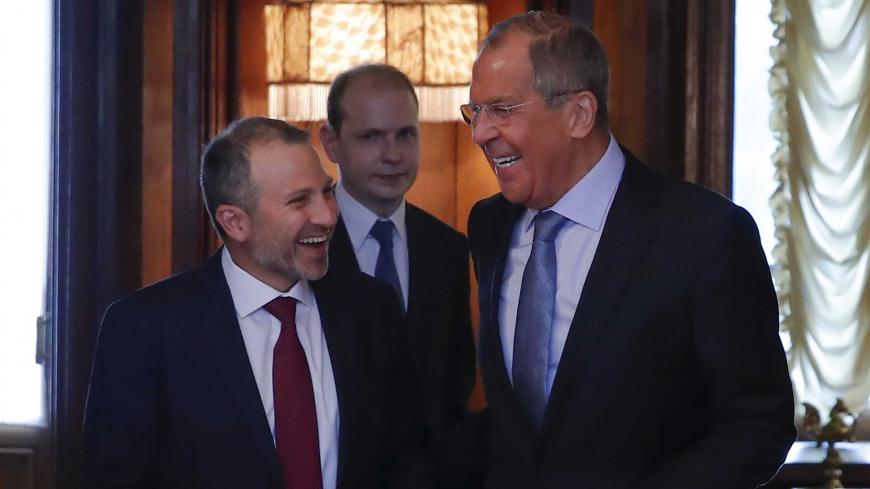 Russia’s Foreign Minister Sergey Lavrov hosted his Lebanese counterpart Gebran Bassil in Moscow Aug. 20. The agenda of the talks included economic partnership, military-technical cooperation, protection of religious and ethnic groups, the situation in Gaza and the relationships between Russia and the Mashriq countries. The main item, however, was Russia’s initiative to return Syrian refugees home from neighboring countries.

During the final press conference, Lavrov said that Lebanon should not become a hostage to the Syrian crisis and the problem of refugees.

“We have discussed in detail the prospects for strengthening our cooperation on issues related to the safe and dignified return of Syrian citizens home, those who have found temporary refuge on Lebanese soil,” Lavrov said. “Conditions for this have been created and will continue to improve.”

He added that the Centre for the Reception, Allocation and Accommodation of Refugees that Russia established in Syria has been distributing information on the localities that are ready to receive people who wish to come back to their homes. According to Lavrov, nearly 7,000 refugees have returned from Lebanon during the last month alone.

Bassil noted that Lebanon supports Russia’s project and is willing to cooperate with Moscow and other parties. He argued, “The conditions in Syria have changed. Currently we see more and more areas where stability and safety have been established. So we do not see any reasons why Syrian refugees should stay in Lebanon.”

In late July, Putin’s special envoy for Syria Alexander Lavrentyev visited Beirut to discuss repatriation. On Aug. 18, during bilateral talks with German Chancellor Angela Merkel in Meseberg, Putin emphasized the humanitarian aspect of the Syrian conflict, pointing out that the return of the refugees would lift a weight off Europe’s shoulders and to make it happen, European countries must “help restore the water supplies, sewage systems, healthcare, the most basic things.”

Later, German government spokesperson Steffen Seibert stated that Berlin considers the discussion over reconstruction of Syria's devastated areas premature, as political peace is required first. However, Moscow is unlikely to give up on its project of repatriation because it both showcases Syria’s seeming stability and disguises regime’s numerous political problems.

In this sense, Bassil is quite well suited to negotiate with Russia. In June, during the visit of Lebanon’s Prime Minister Saad Hariri to Moscow, he criticized the UN Refugee Agency (UNHCR), accusing it of preventing Syrian refugees from returning home and declaring that an “international conspiracy” designed to weaken Lebanon is holding them there.

During the latest meeting, Lavrov basically repeated Bassil’s claims. He noted that European countries “are coming to understand that precisely defined measures are needed” to repatriate Syrians, but Washington is impeding the repatriation process by refusing to take part in rebuilding infrastructure in government-controlled regions.

“It turns out that the Political Department of the UN Secretariat issued and circulated throughout the UN system in October 2017 a secret directive prohibiting organizations that are part of this system to participate in any projects to restore the Syrian economy, limiting their involvement to humanitarian aid and nothing more,” he complained.

Interestingly, Lavrov repeated the words of his predecessor, Igor Ivanov. In 2007, discussing the crisis in Lebanon after the murder of Prime Minister Rafic Hariri, Ivanov warned that Lebanon should not become a hostage of outside interests. The overlap in rhetoric means that Russia’s position remains unchanged and shows the meaningless formality of diplomatic exchanges.

As a result, Bassil has predictably supported the Russian initiative for repatriation, although Lebanon does not have any official contacts with the Syrian regime and the country's new government still has not reached a consensus on the issue.

Hariri and other anti-Syria parties object to this measure. On the same day the talks in Moscow took place, Minister of State for Refugees Mouin Merehbi stated that his office is not working with the Russians on repatriation. Earlier he had said that he was going to make the Russians guarantee that refugees would be returned to safe areas.

However, Hezbollah and its allies, such as Shiite Amal Movement and particularly the Christian Free Patriotic Movement created by President Michel Aoun and led by Aoun’s son-in-law Bassil, have repeatedly encouraged the return of Syrians, the majority of whom are Sunnis. The General Security directorate has declared that it was working with Syrian intelligence to organize repatriation and had already opened 17 centers all over the country do so. Lebanon's Maj. Gen. Abbas Ibrahim and Syrian National Security chief Ali Mamlouk are both part of the Russian-Syrian-Lebanese Committee for Repatriation.

Lebanon’s fragmented and sectarian-based policies can be hardly called comprehensive and effective. Taking geographic and political realities into account, Hariri is likely to soften his position on the Syrian regime. In theory, foreign contribution to the repatriation process and investments is possible, yet Russia is unlikely to accept the West as a moderator in this process. At the same time, it is naive to think that Damascus sincerely cares for its citizens and is not just trying to project an image of a compassionate government for the sake of foreign policy goals. The media has already spread the words of Jamil al-Hassan, intelligence head of the Syrian Air Force, who claimed that dissent would be crushed and supporters of the rebellion punished.

In February the UNHCR published a list of conditions for repatriation such as a benign environment, guaranteed safety and amnesty for former refugees, including those who avoided military service. However, the UN’s latest reports show that these conditions are still not met and the regime continues to pit the remaining residents against the rebels.