Amid the uncertainty over the future of Idlib, Russia eyes its participation in reforming Syria's National Defense Forces as a tool for balancing Iran's influence in the country. 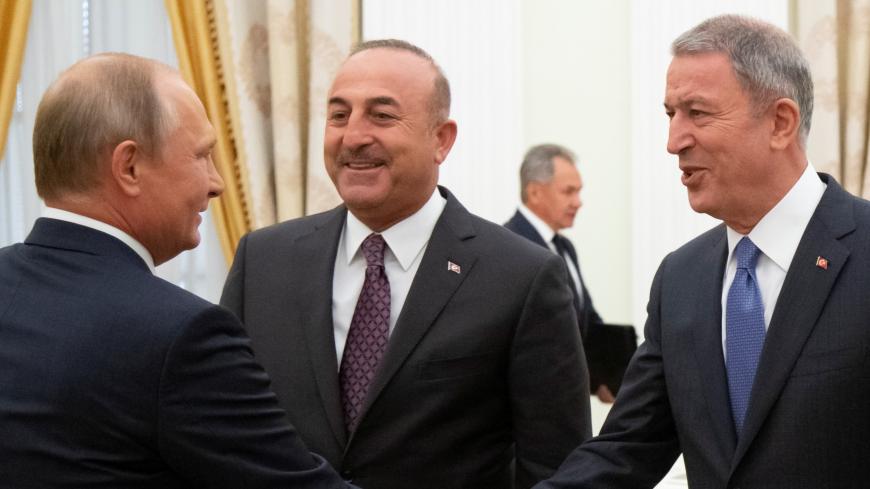 At a joint news conference following the talks, Lavrov said, “There are many civilians there and there’s an armed opposition, which is interested in participating in the settlement processes. There are several tens of thousands of militants from the so-called Hayat Tahrir al-Sham, formerly Jabhat al-Nusra group, who are trying to control this entire territory and hamper the efforts, in particular, undertaken by Turkey to separate healthy opposition from terrorist groups. These matters are being discussed by our foreign ministries. They are also discussed by our respective military, as well as our special services. We are not done yet. We will have additional meetings with the participation of all our colleagues, so we will be able to provide more information a little later.” (Turkish Defense Minister Hulusi Akar also was in Moscow on Aug. 24.)

Meanwhile, Syrian President Bashar al-Assad continues to move his army formations and militia units toward Idlib. Russian special forces and other military professionals are also converging in the de-escalation zone that is delineated by border posts. Russia has already managed to force a reconciliation between the opposition and the regime twice — in northern Homs and in the southwestern region. Moscow would like to repeat this scenario in Idlib by using a limited military campaign to suppress radical opposition hotbeds and guaranteeing that the rebel factions supported by Turkey would not resist the campaign. Firas Tlass, a businessman whose father once served as Syria's defense minister, said the agreements between Russia and Turkey seemingly demanded to deploy Russian military police and civilian security institutions in Idlib. An Al-Monitor source in the armed opposition said the most discussed topic in the province at this point is the prospect of handing weapons heavier than 23 mm anti-aircraft twin-barreled autocannons over to Turkish army.

However, to keep the country in order, to expand Russian influence in Syrian force structures and to maintain at least a mere facade of a political resolution process, Russia needs at least two things. First is Russian participation in the creation of a revamped Syrian military where some former rebel units and the Syrian Democratic Forces (SDF) would be integrated into the armed forces.

Second, Moscow needs to tackle an equally complex challenge of disbanding numerous local militias, particularly the National Defense Forces (NDF), which are virtually a parallel army created by Iran and Hezbollah. The problem of reining in the regime-loyal factions is becoming more urgent, and Damascus seems to welcome Moscow’s role in helping to fix it. For instance, while there are more and more reports of fighting between the regime and militia groups, in Deir ez-Zor Russian soldiers encountered no resistance in arresting an NDF commander.

Damascus has a desperate need for an equivalent number of internal forces to maintain stability and security, so diverse militia groups are likely to remain even after complete victory is declared. Moreover, all armed formations of the regime were basically legalized in 2013, receiving carte blanche from the Syrian Interior Ministry. The NDF and other local militias such as the LDF and tribal units emerged because the Syrian army and security structures had not been ready for the revolt; militarized groups filled the void. To compensate for personnel lost to casualties, in 2012 the government troops formed the NDF militia units, using the Iranian Basij paramilitary as a template and enlisting Iran’s support. To reinforce the infantry carried into battle by pickups and trucks equipped with heavy machine guns, the government supplied the militias with tanks from storage bases and stocks from some army units.

Various Shabiha groups still working under the NDF’s patronage control checkpoints, which in practice ensures their access to some corruption schemes, including ways to move radical opposition militants to Turkish-controlled areas. A source in an opposition group who spoke with Al-Monitor said the Shabiha — mostly Alawite groups of armed militias that support the Baath Party government — recently asked for $4,000 to relocate IS terrorists from the camp in Yarmouk to Idlib province; moving IS wives and children from Homs cost $2,000.

Damascus had made feeble attempts to reform the NDF even before Russia intervened in the conflict. Among prime incentives for doing so were that NDF troops at times violated rules and went out of control, becoming a problem for state security. After Russian troops had been deployed, new statements about reforms in the NDF appeared, as Russian military supervisors, disappointed with pro-regime force structures, insisted on changes.

Rumors of a future disbanding of the NDF were bizarrely concurrent with the 2015 death in Aleppo of its virtual founding father — Hossein Hamadani, an Iranian Revolutionary Guard commander. Nevertheless, territorial militia units were not dismantled; they were only partially included into the 4th Volunteer Assault Corps created with the help of Russian supervisors in Latakia. The corps consisted of six redesigned brigades that had partly originated from the NDF. The 5th Assault Corps, created as a unit representing the entire territory of Syria by Russian generals and commanded by them, also did not fully replace the Iran-supervised (and at least partially Tehran-funded) militia but rather became an alternative to it.

In 2017, the head of Iran's Islamic Revolutionary Guard Corp., Gen. Mohammad Ali Jafari, publicly asked the Syrian government to adopt a law legalizing the NDF’s status. This request was made while Moscow and Tehran were reported to be in debate over the militia’s future. According to some sources, Iran is still insisting that all major regime-loyal volunteer battalions, tribal units and foreign militias such as Palestinian groups, Afghan Hazaras and some Iraqi Shiites unite under the NDF’s flag. Recently, Russian-Iranian controversies have continued to impact the status of NDF soldiers and the regularity of their salary payments. Nonetheless, Moscow wants to include NDF units from the Qalamoun region into a new 6th Corps.

Pro-government factions are a delayed time bomb for the stability of a government since they are frequently used by various local and international players for their own benefit. Thus, it is easy to understand why Russian military supervisors make efforts both to reform the existing militia system and to create a force they can control. The question is how much the integration of diverse armed groups will help Russia maintain real influence within Syrian security structures. As Fatih Hassoun, leader of Harakat Tahrir Watan, claimed in an interview with the Russian newspaper Kommersant, the 4th Corps is in fact controlled by Iran, whereas Hezbollah, which had taken part in the creation of the 5th Corps, reportedly started to channel Iranian interests in this structure as well.

The situation involving the independent tribal militias of Sheikhs Turki Abu Hamad, Ghazi Ibrahim al-Dair and Suleiman al-Shwakh is even more confusing. Their significant role in turning the events in Assad’s favor was acknowledged in late July by Col. Gen. Alexander Dvornikov, commander of the Southern Military Division of Russia, who led the Russian Armed Forces group in Syria from September 2015 to July 2016. Russian military officers are discreet about these squads; however, the issue is obviously about Turki’s Quwat Muqatili al-Asha'ir, Ghazi’s Suqur al-Furat and Suleiman’s Fawj Maghawir al-Badiya. Although Moscow recognized their input and officially rewarded the commanders of these militias, the fighters can neither be really called well-disciplined — Quwat Muqatili al-Asha'ir and Fawj Maghawir al-Badiya used to battle each other — nor are they entirely independent from Iranian instructors and accordingly from Iranian interests.

Generally, despite some efforts to reduce Iranian influence in southern Syria — which has basically coincided with the shifts in Tehran’s entire strategy, as it no longer needs such a prominent presence in Syria— it is unlikely that Moscow will fully retain its control over its “client” Assad. At the same time, armed militias, which have suffered severe losses during the civil war, will demand their part of authority in postwar Syria. This likely will not change the country’s political system but will quite likely increase corruption and nepotism.