The Syrian government faces a "what now?" dilemma as it struggles to deal with all the militant groups it recruited to fight for the regime, along with rebels who have surrendered. 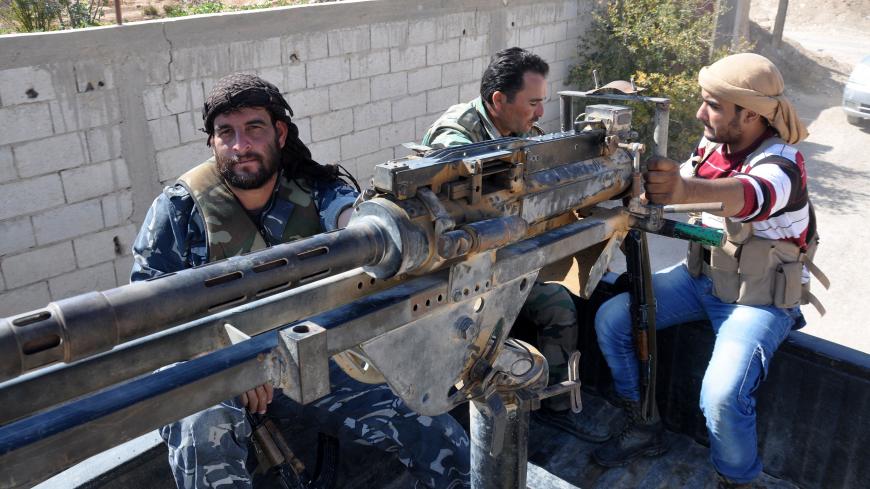 Syrian soldiers and pro-regime militiamen man a heavy machine-gun mounted on the back of a pickup truck as they ride in the recently retaken desert town of al-Qaryatain, Syria, Oct. 26, 2017. - STRINGER/AFP/Getty Images

Syria appears to have way too much of a "good" thing. The regime finds itself flooded with numerous paramilitary networks originally created to support its war against the opposition. That yearslong civil war seems to be winding down, though peace talks have been anything but smooth.

The government is working to stabilize security in the areas under its control, in part by reintegrating the paramilitary groups into its forces. These thousands of militants include former rebels who have surrendered. So far, it's been a small-scale effort conducted by superficial means. The regime needs to develop a long-term, institutionalized plan.

At the onset of the Syrian revolution, President Bashar al-Assad's regime was faced with massive manpower problems, with soldiers defecting for political reasons or because they were reluctant to fight outside their home regions as the conflict escalated. Before the war began in 2011, the Syrian army boasted around 300,000 troops, primarily young conscripts. By 2015, that number had dwindled to fewer than 100,000.

Over the years, the regime confronted the problem by outsourcing some of its security needs to militias, which allowed conscripts to fight in local areas. Deserters were able to sort out their military status, meaning they could be granted a kind of amnesty for the time being. Large formations such as the National Defense Forces (NDF), the Local Defense Forces (LDF) and a number of paramilitary groups linked to various intelligence services marked the Syrian security landscape.

The NDF was created by merging local groups, while the LDF, which was considered part of the Syrian army, came under Iran's leadership. The LDF supposedly amounted to 50,000 members, but that figure is believed to be greatly exaggerated, according to Syria expert Aymenn Jawad Tamimi, a fellow at the Philadelphia-based Middle East Forum. Both groups were created about five years ago.

Attempts to bring order to the security sector have taken the form of reintegrating various factions under the 5th and 4th Assault Corps, with some also being folded into Syria's elite Republican Guard.

“The regime is focusing on two reintegration mechanisms, first by compelling those who didn’t do military service to serve at an individual level in the new auxiliary forces, or by co-opting units to join these formations,” Haid Haid, a Syria expert at Chatham House and at the International Centre for the Study of Radicalisation, both in London, told Al-Monitor.

Yet Nawar Shaaban, a Syria expert affiliated with the Istanbul-based Omran Center for Strategic Studies, told Al-Monitor that Russia has led the Syrian paramilitary consolidation.

According to the Russian International Affairs Council, Moscow has been trying since 2015 “to minimize the influence of various non-state armed groups and militias fighting for the government."

The 4th Assault Corps in 2015 consisted of different militia and armed groups operating in Latakia and fell under the direct command of the Syrian army, while the 5th Assault Corps united different NDF groups and former Syrian army defectors, according to the council. The 5th Assault Corps includes several volunteer groups — the Assad Shield, Mahardeh Forces, Martyrdom or Victory Groups, ISIS Hunters, Tribal Forces and Baath Brigades — and its weapons are supplied by the Russian army.

Other groups, such as Abu Fadl Abbas, have been integrated into the Republican Guard, Haid explained.

Groups such as the Qalamoun Shield (Dara al-Qalamoun) and Coastal Shield (Dara al-Sahel) have also been placed under the authority of the Republican Guard, according to a recent article published by Carnegie Endowment’s blog Diwan.

The same article underlined the formation in 2017 of the 30th Division of the Republican Guard, which included all local militias in the area of Aleppo. In 2017, the Middle East Institute estimated pro-regime militias comprised more than 150,000 fighters.

The regime also incorporated rebels who surrendered. According to Haid, the regime has relied on obligatory conscription to integrate former opposition fighters into the official armed forces. Haid believes opposition fighters were lured to join pro-regime auxiliary forces such as the Iran-backed NDF or the Russian-led Fifth Brigade, a process facilitated by local influential figures who acted as intermediaries.

Shaaban said, “Moscow has insisted on the reconciliation process in Daraa, Homs and Qalamoun, and on the incorporation of rebel fighters in new structures. They know the regime doesn't have the manpower to fill the void, and they don't want pro-Iranian structures to take over."

While the process appears to have facilitated the integration of a number of militias, it remains riddled with problems.

“The integration is incomplete. Structures are keeping their labels and fall under a new security umbrella because the integration is often taking place at a unit level," Shaaban added. "Entities are remaining in the form of parallel structures that operate and exist alongside auxiliary forces, as has been the case of [the] ex-Abu Fadl Abbas forces with the Republican Guard."

Haid said, “Militia fighters have been incorporated within auxiliary and emergency forces, rather than regular forces, without any concrete follow-up plans for the future. Likewise, many targeted militias have been co-opted on the unit level rather than on the individual level, which has failed to transfer their loyalty from their backers to the state. The reintegration is still small-scale, with Russia figuring out what to do with all the militants. Another complication is the competition between Russia and Iran, which wants to keep structures such as the LDF independent."

Shaaban concurred, adding that, unlike the NDF, the LDF — which was incorporated officially into the state’s military apparatus — doesn't require its members to sort out affairs with official military institutions, because the LDF is considered one.

“In addition, Iran is also beefing up other parallel structures such as private security companies, which in 2013 amounted to three, a number that has risen to 18. These companies are responsible for managing the security of main highways, oil and gas fields such as the Shaer field, and installations, among them the famous T2 installation,” Shaaban said.

There seems to be a struggle between Iran and Russia during the post-war phase in Assad’s territory. In addition, the process of incorporation is limited in scope and nature. These facts imply that the Syrian state still has a long road ahead to resolve the dilemma it faces.