West Bank settlements are enjoying a new era of well-being and calm on all fronts, including the Israeli left who gave up as no one cares to listen. 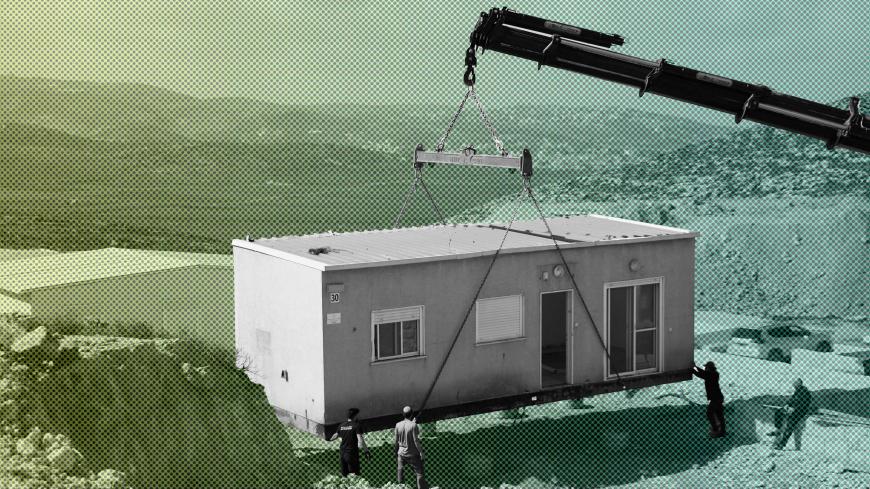 A crane lowers a structure to the ground in Amichai, a new settlement that will house some 300 Jewish settlers evicted from the illegal Amona settlement, in the Israeli-occupied West Bank, Feb. 22, 2018. - REUTERS/Ammar Awad

“I don’t want to give you any inside tips, but I can promise you that no settlements in the Land of Israel will be evacuated.” This was Prime Minister Benjamin Netanyahu’s confident response to a question he was asked on Instagram on Aug. 20. The person asking wanted to know whether he should buy a home in the West Bank or be concerned about a possible future evacuation that would affect his investment.

During the Obama administration, that same answer could have caused new tensions with the White House. Today, however, with US Ambassador David Friedman himself toeing a pro-settlement line, Netanyahu’s response was reported by the press almost incidentally.

Friedman met Aug. 16 with a group of settlement leaders, including Likud Knesset member Yehuda Glick, who lives in the settlement of Othniel in the southern Mount Hebron region. Glick later reported that the ambassador brought them a reassuring message that the Trump administration has no plans to demand the evacuation of any settlements.

These weren’t empty words either. As it turns out, the settlements are thriving like they haven’t in years. In the last few days, there have even been reports on new construction starts and plans not only in the major settlement blocs but also beyond them.

In a celebratory press release on Aug. 21, head of the Beit El Local Council Shai Alon announced that he had reached a series of understandings with the Ministry of Housing concerning the construction of 350 new residential units, in addition to units whose construction was approved half a year ago. “We are right before Rosh Hashanah [the Jewish New Year], and we are thrilled to conclude the year with even more approvals for construction in Beit El. … It is important to remember that not a single residential unit has been built in this regional council for over a decade now,” notes the press release.

On that same day, it was announced that the Supreme Planning Council of the Civil Administration is expected to approve the promotion (in the planning process) of 2,000 housing units in West Bank settlements. These include plans for 1,000 brand-new units, to be discussed for the first time. The current report would certainly have resulted in a diplomatic incident during the Obama administration, but now it hardly garnered a response. Reports about a plea deal with Trump’s personal attorney get much more attention than stories about expedited construction projects in the settlements. Similarly, a report on Aug. 15 about plans to build thousands of new housing units in Jerusalem was met with silence.

When then-Vice President Joe Biden visited Israel in 2010, it was reported that the government had approved the construction of 1,600 new housing units in East Jerusalem. The White House was livid, and Netanyahu, who was taken aback by the timing of the report, was quick to respond with clarifications. He even put the plan on hold. Some of the units in Jerusalem whose construction was approved Aug. 15 were the very units whose construction was halted in 2010 because of the “Biden incident.”

According to data collected by Peace Now, during the past year and a half of the Trump administration, construction tenders and plans for the settlements have tripled in comparison with the last period of the Obama administration.

“This is a dramatic development. The situation on the ground is changing rapidly,” Shabtay Bendet, head of Peace Now’s Settlements Watch Team, told Al-Monitor. Bendet is responsible for the famous reports that Peace Now has been producing for years. According to Bendet, in the past, the information they contained would feature in front page headlines and elicit responses from as far away as the White House. Since Trump’s election, however, and his marked disinterest in the issue of construction in the West Bank, there has been no interest in such information.

“Restraints on construction in the settlements have been lifted. The Americans don’t care, so journalists here don’t care either. We haven’t been able to get news about what is happening on the ground out to the public," Bendet said.

Bendet and his colleagues continue to produce regular reports, which they disseminate to the general public but also to people who help set policy. These include the members of the Meretz Party faction in the Knesset, since they are supposed to be leading the fight in the Knesset and the media against construction in the settlements. But Peace Now has also been having a hard time advancing the issue with them ever since the new administration took office in Washington. “I am fully aware that Meretz Knesset members have been less vocal in sharing our messages,” said Bendet. “We send them reports showing a dramatic rise in construction in the settlements, but even that has no effect.”

“It’s true,” said Knesset member Mossi Raz of the Meretz Party, himself a former director general of Peace Now. He explains that he and his colleagues are certainly disturbed by these recent developments, which make the possibility of a two-state solution all the more remote. Still, they simply failed in evoking public and media interest in the issue of construction in the settlements. In the past, any time they released a combative response opposing such construction, the media would have cited them extensively. Today, there is no interest in what they have to say on that.

“Even I deal with it less,” said Raz. “While it is of crucial importance since it reflects a shifting situation, it is very difficult to get it onto the public agenda. In the past, there would have been a sharp American response as soon as data on construction in the settlements was released. Today, that information is met with silence. So, it is obvious that journalists are writing about it less. We feel ineffective. Personally, it seems as if the public has come to accept construction in the settlements, despite the enormous damage it causes. Even on social media sites, there are significantly fewer responses to this than there were in the past.”

No matter how anyone looks at it, the situation in the settlements has certainly changed in the Trump era. The settlers themselves had long grown used to being the “problem” and an “obstacle” in Israel’s relationship with the United States. Yet even they never expected to see the situation change so rapidly — and it has been a dramatic shift. For years, the Americans kept a meticulous account of every new home in the West Bank, and getting a new construction program off the ground was exceedingly difficult, if not impossible. The toughest period, as far as the settlers were concerned, was a short-lived total freeze on construction, which Netanyahu was forced to implement during the Obama administration.

That has all changed now, and it extends beyond expedited construction and the expansion of settlements. It is just as tangible in the overall mood throughout the country, with the overwhelming feeling that no American diplomatic process is in the offing. As a result, the settlements are enjoying a new era of well-being and calm on all fronts. As far as construction in the settlements is concerned, the White House and the government are silent — but so is the political left. After such a hard time finding its own voice, it too has almost gone silent.