Israeli sources claim that the actions taken by the Donald Trump administration against the Iranian regime all originate in Tel Aviv. 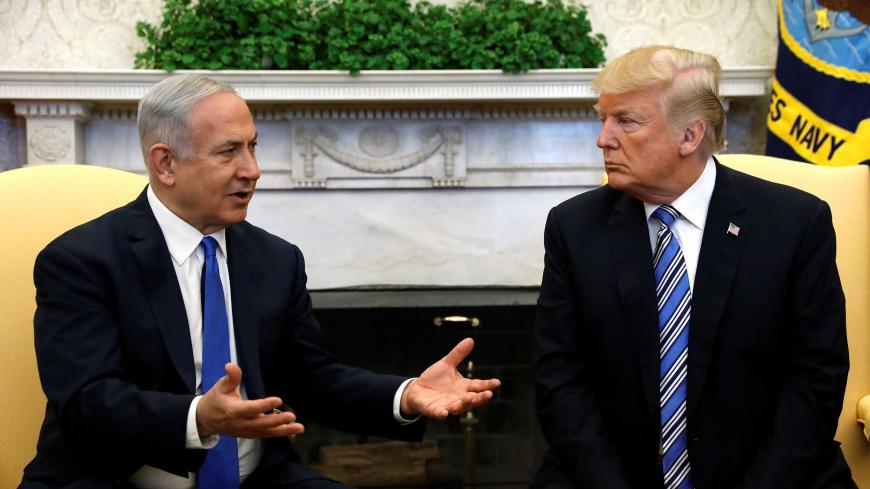 An anonymous high-level Israel intel source was quoted in the Israeli media Aug. 7 as saying that the renewed US sanctions imposed this week on Iran “will bring Iran to its knees.’’ The source also argued that chances are good that the country will be forced to return to the negotiating table with the six world powers that cut the nuclear agreement and agree to a modification and to limitations on its continued expansion in the Middle East.

These words are overly optimistic and exaggerate the accepted opinion that prevails in the Israeli security system. But the quote does reflect the high-to-euphoric spirits in Israel following the US administration's policy changes toward Iran, a country Israel views as a true existential threat. Words that were once uttered behind closed doors or spoken hesitantly have become accepted facts in today’s Israel. In a radio interview Aug. 7, Public Security Minister Gilad Erdan verified this assessment and the Israeli hope that the ayatollah regime will indeed fall in the near future.

According to close associates of the prime minister, everything that is happening now on the American-Iranian-Israeli front was planned in Israel, “marketed” to President Donald Trump by Prime Minister Benjamin Netanyahu and is now being implemented to “fix it or nix it,” the slogan coined by Netanyahu regarding the nuclear agreement. According to Israeli diplomatic sources, Trump is following Netanyahu's plan meticulously.

“First of all, he abandoned the agreement,” a high-level political source told Al-Monitor on condition of anonymity. “Afterward he imposed the sanctions in two stages, so that the pressures on Tehran would continue to increase. Then he announced that there’s a possibility for negotiations and agreed to maintaining contacts with Iran in order to change the agreement. And that is exactly what Netanyahu wanted to happen.”

When he emerged from his last meeting with Trump, Netanyahu said, “We have made important achievements for Israeli security.” This referred to Trump's intention to walk away from the nuclear agreement with Iran and impose sanctions that would continue to worsen until “Iran falls to its knees,” as senior Israeli intelligence figures said this week. Trump’s performance in this area could surpass Netanyahu’s wildest dreams.

The first signal to Tel Aviv that Washington was going to align itself fully with Israeli policy was Trump’s decision to change senior Cabinet members and other top officials. He exchanged those with the more pragmatic, restrained opinions for a new, tougher faction. When John Bolton became national security adviser and Mike Pompeo received the State Department, Israel knew that Trump was going to carry out his promise to Netanyahu. Communications between the two capitals became tighter than ever. The transfer of the Iranian nuclear archives from Tehran to Tel Aviv in a brilliant Mossad operation was the diamond in the crown and helped encourage Trump to make his final decision to abandon the nuclear agreement.

There were those in Israel who compared the nuclear archive theft to the intelligence that Prime Minister Ariel Sharon conveyed in 2002 to President George Bush proving that PLO Chairman Yasser Arafat was behind the second intifada and rearmament efforts of Palestinian terror groups. That document, which was delivered to the Americans by the Israel Defense Forces intel attaché in Washington, caused Bush to overhaul his policy entirely. Arafat was discredited in Washington and became a “bad guy” until his death.

A high-level intelligence source spoke to Al-Monitor several days ago and confirmed on condition of anonymity that there is a basis for cautious Israeli optimism: “Truly crazy things are going on now in Iran; the effects of the American sanctions are far more sweeping and rapid than we first predicted. This is causing real hardship to the Iranians, and they have started to cut back on their funding for terror.” The source confirmed reports that Iran significantly cut back on its assistance to Hezbollah in recent weeks in light of the worsening situation of the Iranian economy. The sanctions are being imposed gradually, all according to plan. There are currently sanctions in specific spheres of commerce, but in November the sanctions will hit the exportation of petroleum products and natural gas. “By November,” another senior intelligence source told Al-Monitor on condition of anonymity, “the Iranians will understand the depth of the pit into which they have fallen. There is a chance that they will change their policy but if not, the regime is likely to start to wobble.”

The only thing that sours Israel’s premature celebrations is Trump’s startling but not atypical announcement that he will speak with Iranian President Hassan Rouhani on the sidelines of the UN General Assembly meeting next month in New York. “If Trump meets with him, that could slow down or ruin the implementation of the plan,” a senior security source told Al-Monitor, also on condition of anonymity.

Tel Aviv has also convinced the Americans of the theory, backed up by intelligence, that a battle is going on in Iran between the pragmatic bloc led by Rouhani and the extremist one in which Quds Force commander Maj. Gen. Qasem Soleimani influences Supreme Leader Ayatollah Ali Khamenei. The pragmatic bloc wants to stop investing in terror and exporting the revolution and concentrate on saving the Iranian economy. The extremists want to continue spreading terror throughout the Middle East and keep up its struggle against Israel.

“It could be that Trump is aware of this internal struggle and is trying to enlarge the abyss that separates Rouhani from Khamenei,” a senior Israeli political source told Al-Monitor on condition of anonymity. “It could be that at the meeting, he’ll make all kinds of far-reaching promises to Rouhani in order to encourage and strengthen him in his difficult battle with the Revolutionary Guard.”

One way or the other, Tel Aviv believes salvation is coming in November.