The scenario Israel's security and intelligence chiefs feared the most is now becoming reality: Iran is being pushed to the wall by the United States and therefore is shortening its "breakout time" toward a nuclear bomb. 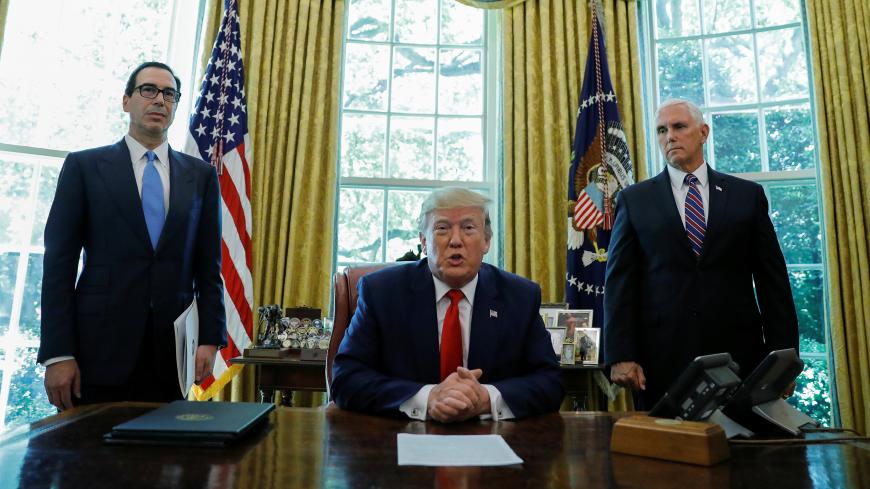 In one sentence, the US Secretary of State managed Nov. 7 to define the ultimate nightmare of diplomatic and security decision-makers in Israel and bring all the demons out into the open: “Members of the international community who are rightly concerned with Iran's latest attacks and provocations should imagine how Iran would behave with a nuclear weapon,” Mike Pompeo said, following the Iranian declaration of the start of phase 4 in its slow withdrawal from the nuclear agreement. He confirmed the estimate of Israeli intelligence that was published here a year ago, according to which the Iranians will violate the agreement gradually, in slow steps, that will gradually grow, until they reach a range from which they could break through to a military nuclear program within a few months.

In the end, so estimated Israeli intelligence officers after the United States left the nuclear agreement, Iran would be ready for a quick “breakthrough” toward the first military nuclear facility. This is, exactly, the situation Israel fears more than anything else on earth. Pompeo also discussed this possibility, saying that the United States will not let it happen; but these words convinced no one in Jerusalem, nor in Tel Aviv (the location of the Israel Defense Forces and intelligence agencies’ headquarters).

“Unfortunately, experience teaches us,” a former high-ranking Israeli intelligence official told Al-Monitor on condition of anonymity, “that not all of the Trump administration’s declarations are translated into deeds. The thing is that this time we are reaching an existential crossroad that might force us to choose an independent path. This time this isn’t North Korea, but Iran, whose declared intention is to erase Israel from the map of the world.”

Israeli intelligence predicted with astonishing accuracy all that has happened in the year and a half since President Donald Trump declared the US withdrawal from the nuclear agreement, in May 2018. In conversation with Al-Monitor in mid-2018, a senior intelligence source, speaking on condition of anonymity, sketched the full scenario: The Iranians would respond to the American exit from the agreement with violations that would grow in severity, it was said in that conversation. At first, they will start enriching uranium again to the 3.5% level, then they will increase the number of centrifuges. Later, they will increase the enriched uranium supply they hold in their territory, then they will operate the enrichment facility at Fordow and start using their sophisticated, fast centrifuges.

Iranian President Hassan Rouhani tried to calm the West a bit this week (especially the Europeans) and announced that all the Iranian steps are reversible and that the return of the West to the nuclear agreement would immediately cause Iran’s return. “What Rouhani said isn’t exact,” a former Israeli senior security source told Al-Monitor on condition of anonymity. “The last step — in which the fast centrifuges are operated and UF6 gas is flowed to them — is not a reversible step. Iran is gaining experience in operating these centrifuges and creating knowledge and scientific capability that brings it quickly closer to the possibility of building the first nuclear bomb facility. Even if in a few weeks or months it stops the operation of the facility at Fordow, you can’t take away the knowledge and experience and it would be significantly closer to a military nuclear weapon.”

We are now mere steps away from the realization of the ultimate Israeli nightmare: Iran is prepared and ready for a nuclear breakthrough that no kind of international body can prevent. Prime Minister Benjamin Netanyahu’s gamble on Trump and on pushing Iran against the wall is crumbling before his eyes, in amazing symmetry to his personal situation in the political and criminal arenas. “Trump too,” a senior Likud source told Al-Monitor on condition of anonymity this week, “is turning out to be an unreliable ally. The president indeed likes Israel, but when it comes to actual actions or his personal political interests, he doesn’t intend to take any risk for Netanyahu’s sake.” It could be that this statement goes too far, but no one in Israel would volunteer to test it in action.

The Israeli security branches are faced with especially difficult tasks right now: The military option in which Israel invested more than 10 billion Israeli shekels ($2.8 billion) in the last decade was meant to enable the capacity to cause real damage to the Iranian nuclear infrastructure. “Netanyahu missed the unique opportunity to use this option and damage the Iranian nuclear project in 2011 and 2012," a former senior Israeli military official told Al-Monitor on condition of anonymity. “It’s not clear how effective this option would be today, seven or eight years later.”

Israel maintained and even improved its capacities in this area in recent years, but its real effectiveness in the winter of 2019 is far diminished compared to the damage Israel could have caused to the Iranian nuclear project in the summer of 2012. “The facility at Fordow is fortified and reinforced under a tall mountain,” a former Israeli intelligence official who had worked on the Iranian nuclear threat told Al-Monitor on condition of anonymity. “What [former Prime Minister] Ehud Barak called at the time the Iranian 'sphere of immunity' has grown in recent years. Just as we prepared for an attack, so the Iranians reinforced, fortified and deepened the defenses of their nuclear sites. Right now, it’s entirely unclear to what extent Israel could carry out an attack that would be a game changer in Iran.”

If we connect all this to the proven Iranian ability to carry out conventional attacks using guided missiles and armed drones, as it recently displayed in Saudi Arabia, we will get a growing Israeli headache. All this is happening as Israel lacks a functioning government; there is no clear prime minister, the country is getting dragged into the third election in a row and the degree of chaos created by Netanyahu’s devotees is devolving even faster the Iran’s nuclear agreement violations.