US President Donald Trump proposed attacking the site in a meeting with advisers last week. 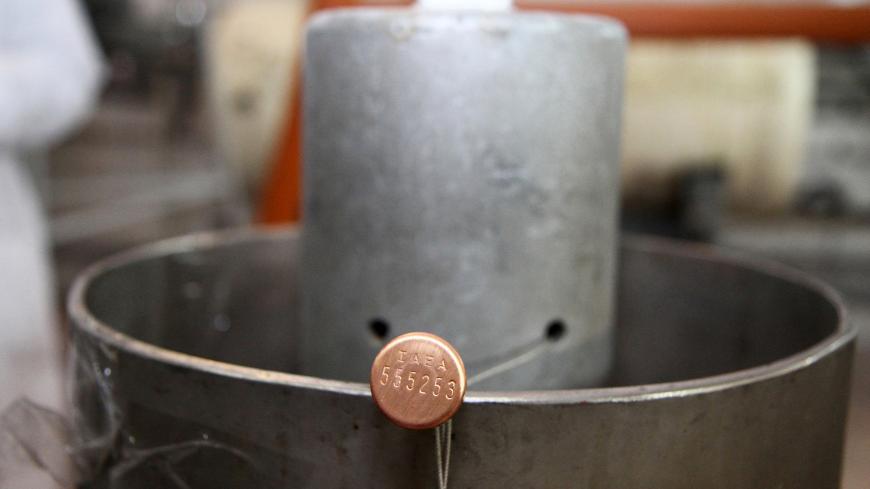 A picture shows the seal of the connections between the twin cascades for 20% enriched uranium production bearing the initials of the International Atomic Energy Agency after they were disconnected at nuclear power plant of Natanz, south of Tehran, on Jan. 20, 2014. - KAZEM GHANE/AFP via Getty Images

Iran has further violated the 2015 nuclear deal by feeding uranium gas to more advanced centrifuges at its main Natanz nuclear site than are allowed, a report by the United Nations’ nuclear regulatory body found.

News of the report, which was obtained by Reuters, comes just days after the New York Times reported President Donald Trump asked top advisers about options to strike Natanz on Thursday.

The International Atomic Energy Agency (IAEA) reported last week that Iran’s government had moved advanced IR-2m and IR-4 centrifuges to an underground site at Natanz, a move not permitted by the 2015 nuclear agreement.

IAEA chief Rafael Grossi confirmed the news while speaking to reporters in Vienna on Wednesday, saying Tehran had moved 174 centrifuges to a newly constructed underground area at Natanz in violation of the 2015 Joint Comprehensive Plan of Action (JCPOA).

Grossi said, however, that Iran had already possessed the centrifuges, so the move did not increase the country's nuclear capabilities. Iran "is already beyond the limits of the JCPOA, but in general terms there is no significant increase in the volumes," Grossi said, according to the Associated Press.

The body reported last week that Iran has compiled roughly 12 times the quantity of low-enriched uranium allowed under the JCPOA. Iranian enrichment has also suprassed the purity levels permitted under the deal, though IAEA assessments suggest Tehran remains far from achieving weapons-grade material.

Trump consulted with senior advisers last week about options for a strike on Natanz, setting off alarm bells among some in Washington that the outgoing president may push for a last-minute attack on Iran.

Israeli officials pushed their US counterparts for years to militarily support such a strike prior to the 2015 nuclear deal, from which Trump’s administration withdrew in 2018.

Iran remains in the agreement, but Tehran has repeatedly violated proscriptions of the deal since the United States walked out.

Iran’s Foreign Minister Mohammad Javad Zarif reaffirmed yesterday that his government will return to compliance with the deal if the United States rejoins the agreement. Iran has publicly announced its deal violations.

President-elect Joe Biden has said he supports returning to the deal with additional stipulations. Iran is widely seen to have used the agreement to expand its conventional ballistic missile program, a move for which the Trump administration has pushed back hard on Iran with an unrelenting barrage of economic sanctions.