International Atomic Energy Agency, in two separate reports, says Iran is not granting the IAEA access to sites suspected of past involvement in Iran's nuclear program and says Iran has significantly increased its stockpile of low-enriched uranium at the Fordow facility. 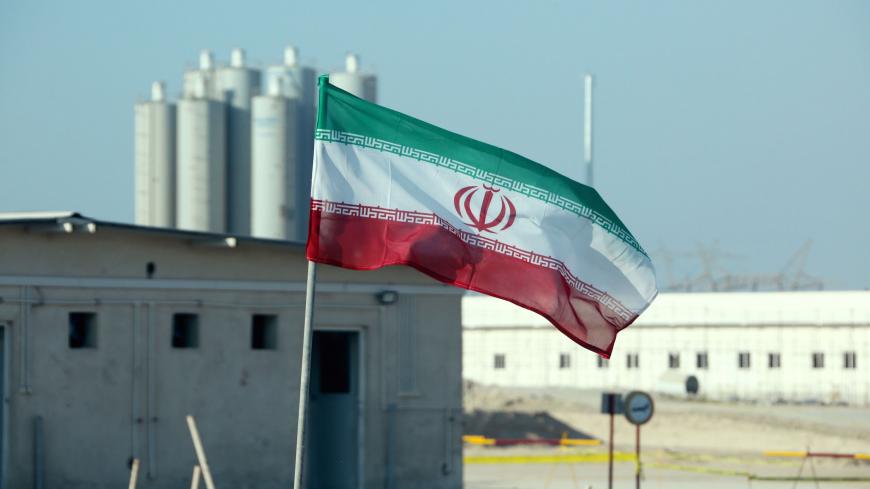 A picture taken on Nov. 10, 2019, shows an Iranian flag in Iran's Bushehr nuclear power plant, during an official ceremony to kick-start works on a second reactor at the facility. - ATTA KENARE/AFP via Getty Images

Iran has dragged its feet on providing access to three sites suspected of past possible involvement in Iran’s nuclear program, the director general of the International Atomic Energy Agency (IAEA) said in a new report today. If not resolved, the development could eventually lead to Iran’s nuclear file being referred back to the UN Security Council, adding new pressure to already strained diplomatic efforts to try to bring Iran back into full compliance with the 2015 Iran nuclear deal.

A separate IAEA report issued today said that Iran has significantly increased its stockpile of low-enriched uranium, including, since November, at the underground Fordow facility, which is built into a mountain-side near Qom. Iran is now enriching uranium using 1,044 IR-1 centrifuges in the underground site, noted Daryl Kimball, executive director of the Arms Control Association.

Under the Joint Comprehensive Plan of Action (JCPOA), Iran stopped all enrichment at Fordow, for three years. But it restarted it in November as one of a series of steps the past year to protest the US reimposition of crippling sanctions on Iran’s banking and energy sectors after President Donald Trump quit the deal in 2018 and launched his maximum pressure campaign against Tehran.

“Iran has not provided access to the agency to two locations … and has not engaged in substantive discussions to clarify agency questions related to possible undeclared nuclear material and nuclear-related activities in Iran,” IAEA Director General Rafael Mariano Grossi wrote in a report on its safeguards agreement with Iran to the IAEA Board of Governors. “This is adversely affecting the agency’s ability to clarify and resolve the questions and thereby to provide credible assurance of the absence of undeclared nuclear material and activities in Iran.”

“The Director General calls on Iran immediately to cooperate fully with the agency, including by providing prompt access to the locations specified by the agency in accordance with its obligations under the Safeguards Agreement and the Additional Protocol,” the report continued.

Kimball said, “This means that the agency is saying that despite consultations with Iran last month and multiple letters to Iran, Iran is not cooperating sufficiently on its basic Comprehensive Safeguards Agreement.”

The increased size of Iran’s stockpile of low-enriched uranium, as documented in the agency report, is something that was anticipated, and may have contributed to the decision by three European parties to the Iran nuclear deal to trigger a dispute resolution mechanism in January, said Ali Vaez, director of the Iran program at the International Crisis Group.

But the agency’s safeguards report is more troubling, though it could be resolved, Vaez said.

“The agency is only coming out now, after several months of effort have come to naught,” Vaez said. “Without any doubt, if the issue is not resolved, the West generally would consider taking this issue to the [IAEA] board [of governors]. And the board might decide to refer it to the UN Security Council. Then from that point on, [it increases] the risk of the collapse of the JCPOA altogether.”

“This is actually not difficult to resolve,” Vaez continued. The sites the IAEA is seeking access to are suspected of relating to past, not current, work. “The Iranians are reluctant to open up a can of worms. They are concerned it is a slippery slope to bring back all the related issues to the fore, and become a constant headache for them.” These related issues involve possible military dimensions.

“But the alternative is worse,” Vaez said. “If they don’t address these issues, and drag their feet and [engage in] obstruction, it could turn into an even bigger crisis for them. It is shortsighted.”

Kimball said, “While the sites at issue are very likely sites that were mothballed and may have been part of pre-2004 weapons-related research, we would strongly urge Iran’s leaders to provide all necessary cooperation with the agency.”

“Bottom line is that current US policy is pushing Iran in wrong direction,” Kimball wrote on Twitter. “The only realistic way to correct course is for the US and Iran to return to compliance with/rejoin the JCPOA and work with the EU, [Russia Federation], China to pursue follow-on negotiations on build on the 2015 deal.”