Some Gaza factions demand that Palestinian President Mahmoud Abbas be included in the Israel-Hamas arrangement. 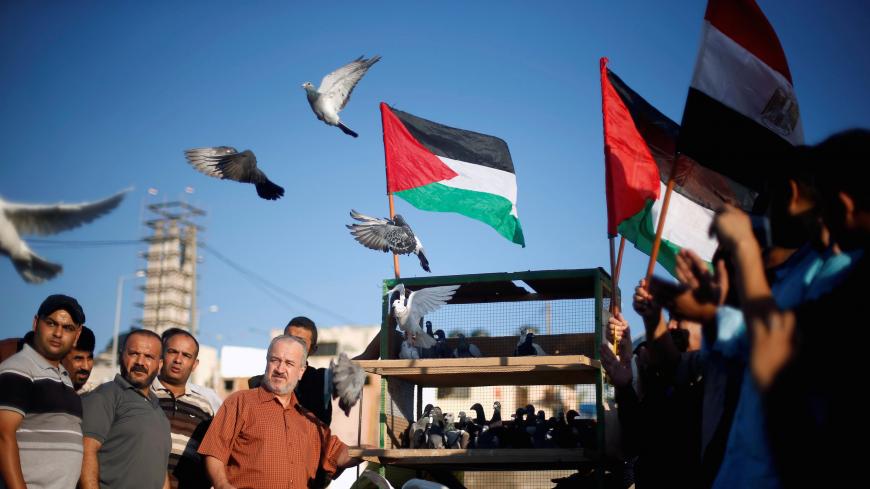 People release pigeons during an event to show support for a unity deal between rival Palestinian factions Hamas and Fatah, in Gaza City, Oct. 13, 2017. - REUTERS/Mohammed Salem

Ismail Haniyeh, the head of Hamas’ political bureau, delivered a sermon in Gaza City on Aug. 21 to mark Eid al-Adha, the Muslim Feast of Sacrifice, promising residents of the Strip they would soon be free of Israel’s 11-year siege. “This is the result of your determined stand and your struggle,” he told them, adding that Hamas would not pay any “political” price for the resulting humanitarian aid. His remarks are similar to the attitude of Israeli decision-makers about the emerging deal with Hamas, with both Prime Minister Benjamin Netanyahu and Defense Minister Avigdor Liberman claiming Israel was not paying a heavy diplomatic price for what it euphemistically terms the “arrangement” with Hamas. Neither side is comfortable admitting to any agreement with the enemy, which by its very nature involves some form of concession.

As part of these concessions, Hamas is committed to obtaining the agreement of all the Palestinian factions in Gaza to a cessation of violence against Israel. While the deal does not entail formal Hamas recognition of the Jewish state, the organization’s leaders will have to explain why they made a deal with the Zionists after years of boasting of their refusal to accept its existence, and why they agreed to abandon the path of jihad.

In his Gaza sermon, Haniyeh provided a diplomatic, somewhat ingenious explanation for the demand that all Gaza factions accept the terms of the agreement with Israel. “To ensure appropriate guarantees of the aid promised to the Strip, all the Palestinian resistance organizations will maintain their status as the shield and defenders of the Palestinian people and the aid will be provided under national Palestinian consensus and the supervision of an Arab safety net,” he said. Unwittingly and even before they accepted their role as “shields,” the factions found themselves united in Haniyeh’s vision under one umbrella as defenders of the Palestinian people.

But this rosy picture portrayed by Haniyeh does not reflect reality. Egypt, which has been mediating the Hamas-Israel deal, summoned the Palestinian factions from Gaza to Cairo Aug. 14 for the final stretch of negotiations, but was unable to reach an agreement with its guests. All of the sides returned to Gaza for the Eid al-Adha celebrations, promising to reconvene in Cairo next week. The Hamas leadership hopes to convince the Palestinian factions by then that the deal benefits them, too.

This does not mean that if the smaller Palestinian groups refuse to join the agreement, they would pose a significant threat to Hamas. However, the Hamas leadership cannot afford even an iota of opposition or criticism by any organization, small as it may be. It cannot afford having any factions claiming that Haniyeh and company, the self-professed leaders of the Islamist resistance, surrendered to Israel in order to remain in power. The honor, the arrogance, the desire to prove that they never give in or give up are deeply entrenched in the DNA of the Hamas leadership.

So which factions is Haniyeh trying to rope in as “defenders of the Palestinian people”?

Hamas has no problem with Palestinian Islamic Jihad, the second largest organization in Gaza. Iran foots the bill for the Islamic Jihad’s operations, and it also partially funds Hamas. Having a common benefactor ensured the Islamic Jihad independence even if it dared challenge Hamas and boast that it is the real leader of the jihad against the Zionists. Ever since the 2014 Israel-Gaza war known as Operation Protective Edge, the two organizations have grown closer and cooperated on military operations as evidenced by the rounds of fighting with Israel in recent months.

Hamas has virtually no contact with the fundamentalist Salafi groups in Gaza. Hamas does not see them as real threats and has thus far left their activists alone (not detained and not arrested) so as not to appear to be defending the Zionists against fundamentalist provocations. However, if leaders of the Hamas armed wing see these groups as a threat that could jeopardize the deal with Israel, they would have no qualms about taking them out in a matter of hours.

At the Cairo talks, representatives of PFLP, acting on orders of political bureau member Rabah Mohanna, demanded that the Palestinian Ramallah leadership be included in any deal. There is no telling how long the PFLP will object to the deal if Hamas and Fatah do not reconcile. Still, representatives of the Fatah movement were invited to Cairo for this last round of talks in an additional, last-ditch effort to convince Palestinian President Mahmoud Abbas to sign onto the move.

The PFLP’s position is not surprising. Following Operation Protective Edge in September 2014, the organization’s leading activists met in the Gaza Strip town of Beit Hanoun and demanded that control of the Rafah border crossing with Egypt be handed over to Abbas in order to ease the Egyptian siege of the Strip. A senior official in the organization, Jamil Mazhar, said at the time from the podium erected on the rubble of the fighting that left thousands homeless that Fatah must be returned to Gaza for the sake of its people.

Activists of the PFLP are not concerned only by the plight of the population. One of the group’s supporters told Al-Monitor on condition of anonymity that since Hamas took control of Gaza and ousted Fatah in 2007, it has imposed a totalitarian regime that limits the freedom of other factions. In particular, he said, Hamas has reined in the so-called “secular” organizations.

Nonetheless, Hamas is pressing for a national consensus in Gaza. Its leaders would like to declare that the Israeli and Egyptian sieges were lifted with no strings attached (no diplomatic compromise on Hamas’ part) and that Hamas had managed to unite all the factions to stand behind the deal. Hamas has no need to put into words what will befall anyone who refuses to go along.