Why Iran isn't concerned over US plans for 'Arab NATO'

Contrary to what some may have expected, Iran does not appear concerned about US efforts to set up an "Arab NATO" — and for good reasons. 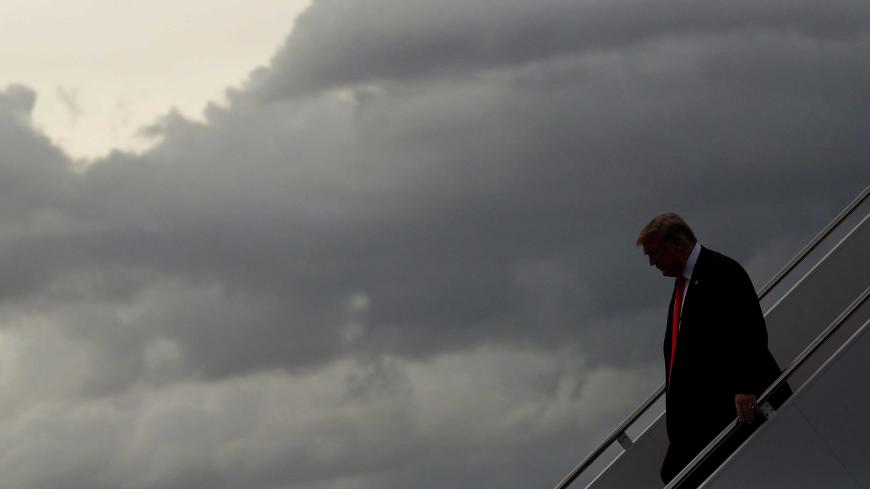 US President Donald Trump walks down the Air Force One steps after arriving at Tampa International Airport in Tampa, Florida, July 31, 2018. - REUTERS/Carlos Barria

The United States is stepping up its efforts to curb Iran’s regional reach and influence, premised on the belief that Tehran has never been so powerful in the Middle East. But Iran’s powerful hand is not merely a reflection of its successful strategic conduct. It has also come about as a result of its rivals’ miscalculated regional policies. Saudi Arabia’s catastrophic military and political campaigns in Syria, Yemen, Qatar and Lebanon, for instance, demolished much of Riyadh’s traditional influence while elevating Iran’s positions. Such policies were encouraged by the US “leading from behind” policy, which induced more agency among some Arab states accustomed to the American security umbrella. The failure of the Arab campaigns strengthened the Iran-led “Axis of Resistance” on an unprecedented scale. Having been targeted indirectly by the “leading from behind” policy, Iran is now faced with a more organized US effort to establish a regional setting — an "Arab NATO," the Middle East Strategic Alliance (MESA) — that is supposed to “push back” against Iran.

President Donald Trump has been signaling different, sometimes contradictory, messages since taking office. His anti-Iran rhetoric and policy on the one hand amid his parallel call for an unconditional meeting with Iranian leaders on the other seem contradictory. Yet as the summit between the leaders of the United States and North Korea in Singapore suggests, these contradictions may, in fact, be two sides of the same coin. It is for this reason that Iran hawks in Washington and in the Middle East are nervous about Trump’s offer of unconditional dialogue. But Iran hawks should nonetheless be thrilled given the recent talk of the US creation of MESA out of eight Sunni Arab nations — in line with the Trump administration’s anti-Iran campaign. The obvious goal is to counter Iran. At least from Tehran’s view, this is at odds with the US president’s offer of unconditional dialogue. Whether Trump’s messages are in harmony or not, the Islamic Republic cannot afford to negotiate with a threatening party. In fact, no one in Tehran can enter such dialogue.

Against this backdrop, Iran does not seem worried about US efforts to create MESA. In fact, Washington’s new anti-Iran campaign in the Middle East and beyond is interpreted as falling within the “milking logic” of the Trump administration. Mindful of its regional reach and influence and the strong position of the "Axis of Resistance" it leads compared with that of its Arab rivals, Tehran seems ready to confront any challenge. The latter can safely be assumed disregarding the fact that the idea of an "Arab NATO" is not new but rather a repeatedly attempted and failed enterprise of decades past. Yet Iran’s relaxed reaction to the current endeavor cannot merely be a reflection of the aforementioned understanding of the situation. Tehran knows that the Trump administration’s campaign against it can bear bitter fruit both for Iran and the region. This begs the question of what precisely the underpinnings of Iran’s relaxed reaction toward MESA may really be.

It is evident that a more organized “leading from behind” policy seems at play in the Trump era. Instead of asking the Saudis to learn “to share the Middle East with Iran,” the US president is organizing an anti-Iran front to target and degrade Tehran’s stakes in the region. But the feasibility of success in overcoming Arab differences and creating a new coalition appears to be a long shot. For instance, some Arab nations included in MESA are closer to Iran than Saudi Arabia, such as Oman and Qatar, while others — such as Kuwait — attempt to stay neutral. Therefore, Washington’s new policy will likely be more challenged by its sought partners as opposed to foes and rivals of the envisioned Arab military alliance.

But what if, against all odds, MESA moves ahead after the slated American-Arab summit in October? Such an outcome would have three main repercussions. First, by explicitly placing its weight behind Sunni Arab states, the new US policy could heighten the sectarian divide in the Middle East. Though this divide has greatly expanded over the past 15 years, the Trump administration’s policy could potentially rally Shiites around the region behind Iran — at least when it comes to their dealings with the United States and its Sunni partners. Second, the inclusion of eight autocratic regimes in the envisioned new military setting is a self-delegitimizing effort. As the Arab Spring made clear, restoration of a policy of promoting “autocratic stability” in the Middle East is not a recipe for sustainable success. Lastly, the “with us or against us” mentality at the root of the decision to exclude countries such as Turkey from MESA in effect boosts the rival Iranian-led front by virtue of pushing Ankara closer to Tehran.

As such, the lack of alarm on the part of Iran in the face of plans for MESA stems from the fact that none of the potential repercussions of US policy are troubling for Iranian interests.

Nonetheless, Iran is keeping an eye on the new US effort. After all, there is a slight possibility of MESA expanding into a broader, hostile coalition. Such a scenario would clearly further enhance military and security threats by the United States, Israel and their Arab partners against Iran and its allies. Indeed, this would leave Tehran forced to allocate more efforts and domestically needed financial resources to counter the pressure. Under such circumstances, it can generally be expected that Iran will show resistance using the same playbook it used under the Obama administration, including acting within a coalition of state and non-state actors to confront the collective challenge, provided that it crystallizes militarily in the region; using existing divisions within the Gulf Cooperation Council to further weaken a MESA, banking on its close ties with some of the member states of such an entity; and undercutting the efficacy of US policy in the region, including its anti-Iran posture, through closer relationships with emerging powers on the global stage as well as marginalized states and non-state actors in the region.

To reiterate, the odds of the new US policy to “push back” against Iran’s regional reach succeeding appear quite low. Washington first has to close the deep gaps between the envisioned MESA member states, which is quite a task for a notoriously impatient president. Provided that these gaps are bridged politically, the United States also has to bring its partners closer militarily and security-wise, which could very well turn out to be an even tougher job. The United States would then have to begin the training and arms exports to forge the new military force, and finally, then confront Tehran and its allies all over the region. Supposing that pressure from Trump will make “mission impossible” possible, one can envision Iran and the "Axis of Resistance" to be equally ready for any confrontation. As such, it is unclear what precisely MESA can add to an already volatile region. Siding with one party of the sectarian divide, backing autocratic regimes and marginalizing major actors are not components of prudent policy aimed at reducing tensions and creating a more stable Middle East. Instead, such a posture will only lead to the exact opposite: namely more tension, more instability and an entrenched Iranian reach across a region more sharply divided along sectarian lines.