The Trump administration’s new Iran strategy not only shuts the door to diplomacy with Iran but also alienates ordinary Iranians. 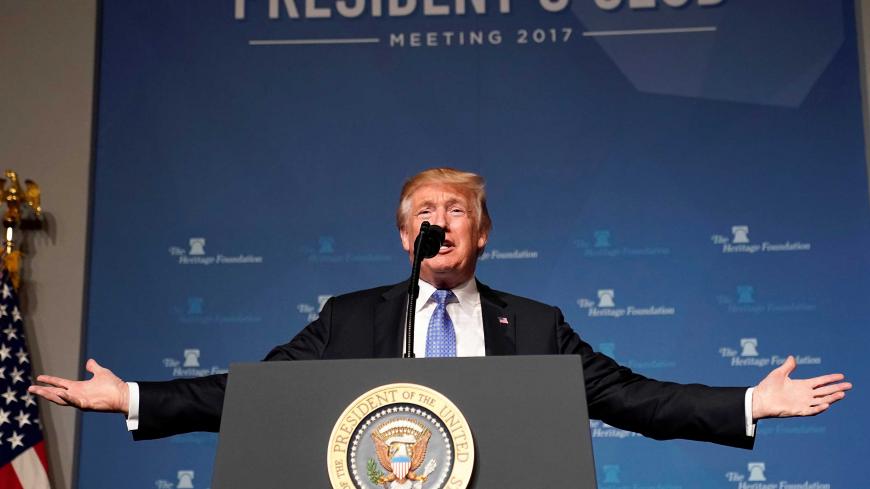 After nine months of disavowing the Obama administration’s Iran policy, US President Donald Trump has finally unveiled his strategy toward the Islamic Republic: all-out confrontation. His Oct. 13 speech announcing the policy was nothing short of war mongering and marks the elimination of any prospects for successful US-Iran diplomacy.

Trump's address and the White House fact sheet detailing his Iran policy centered on traditional US rebukes of Iran over its regional influence, defensive capabilities (such as its ballistic missile program), its domestic policies and the role of the Islamic Revolutionary Guard Corps (IRGC). Of course, he also followed through with his threat to decertify Iranian compliance with the Joint Comprehensive Plan of Action (JCPOA), against the wishes of his senior advisers and European allies, and even as the International Atomic Energy Agency (IAEA) has repeatedly verified Iran’s compliance with its obligations under the nuclear deal. Trump also said that if a “solution” to the JCPOA was not reached with Congress and US allies, “then the agreement will be terminated.” Furthermore, while he stopped short of designating the IRGC as a terrorist group, he imposed new sanctions on the organization.

Trump’s Iran policy is based on an amalgamation of the most hard-line talking points on Iran uttered by every US administration since 1979, with the sole exception of President Barack Obama’s second term. Every US president since 1979 has accused the Iranian government of being a state sponsor of terrorism, destabilizing the region and transgressing the rights of its people. US policies all evoked a desire for regime change through attempting to isolate Iran and mobilize regional and international powers against it, exporting arms to regional states hostile to Iran, supporting violent opposition groups and separatists inside Iran, and engaging in covert war aimed at sabotaging Iran’s economic and military capabilities.

Trump’s speech was notable given that it was light on actual strategy. Instead, he relied on polemics and insults bound to offend Iranians of every political stripe, particularly through use of the term “Arabian Gulf” to refer to the historically and internationally recognized name for the body of water that separates Iran’s southwestern coast and the Arabian Peninsula. Of note, the United States officially refers to the latter as the Persian Gulf, as does the United Nations. Consequently, such rhetoric reinforces to the Iranian people the disingenuousness of Trump's references to their “proud history … culture … [and] civilization”; this, coupled with Trump’s outright ban on Iranians entering the United States, negates any Trump claim of siding with them.

With respect to the JCPOA, Trump’s speech and his newly laid-out policy reveal that he seeks to goad Iran into withdrawing from the deal. Given international support for the landmark accord, he is in a bind, and thus aims to kill the deal by attempting to create international consensus over sanctioning Iran for non-nuclear reasons that have to do with purported Iranian malign “behavior” in the region.

While Trump’s speech won him immediate official acclamations from the Israeli, Saudi, Emirati and Bahraini governments, traditional US allies in Europe all publicly declared their strong support for the JCPOA and intention to continue diplomatic engagement with Iran. The IAEA reiterated that Iran is fully in compliance with its obligations under the deal. Thus, it appears that the United States is experiencing unprecedented international isolation on Iran. Indeed, after Trump’s speech, EU foreign policy chief Federica Mogherini said, “The international community, and the European Union with it, has clearly indicated that the deal is, and will continue to be, in place.”

The situation could also quickly deteriorate given the Trump administration’s increasingly frequent declarations of regime change as an overarching foreign policy objective. Secretary of State Rex Tillerson reiterated Oct. 15 that Washington’s “endgame” is for the Iranian government to be toppled. By committing to a regime change policy, Trump is not only contradicting his own campaign rhetoric, which castigated US policies of regime change under Obama and President George W. Bush, but is violating the UN charter and reviving memories in the Iranian public of the 1953 CIA-orchestrated coup that overthrew the democratically elected government of Mohammad Mossadegh. Such attempts by Trump to create cleavages between the Iranian public and government, or even within the government in Tehran, are futile — and fatal to any endeavor to negotiate with Tehran on any issue.

Trump’s decertification of the JCPOA and his ultra-hawkish, anti-Iran rhetoric have not only alienated US allies, but predictably united a usually divided Iranian public behind their government. Moreover, with his vociferous attacks on Supreme Leader Ayatollah Ali Khamenei and the IRGC, Trump has ruled out any possibility for negotiations with Tehran and put the two countries on a dangerous trajectory toward war.

After nearly 40 years of pursuing confrontational, zero-sum strategies toward Iran, the United States has only seen its regional influence wither and its autocratic allies prove unsustainable, while Iran has emerged as a major regional power.

For Trump to now take such a hostile stance toward Iran — and especially Ayatollah Khamenei and the IRGC — positions the United States to be perpetually at odds with the Islamic Republic and remain entangled in costly interventions in the region at unnecessary cost to its human and material resources and global standing.