Erdogan set to meet Putin, Rouhani in Iran to weigh options on Syria

Turkey, Iran and Russia are set to hold a three-way summit in September in Iran, where Erdogan will likely renew pleas for more time to work out a deal separating the “moderates” from the “terrorists” in Syria's Idlib. 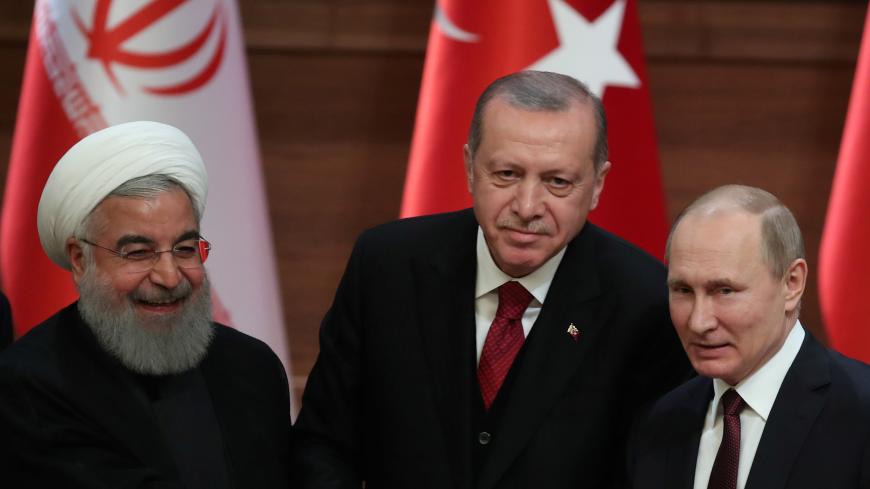 Turkish President Recep Tayyip Erdogan is scheduled to travel Sept. 7 to Iran, where he is expected to take part in a three-way summit with his Iranian and Russian counterparts. Turkey’s NTV reported the meeting would likely take place in the northwestern city of Tabriz, in Iran’s East Azerbaijan province.

The three leaders last assembled in April in Ankara for deliberations on Syria, where an imminent regime assault on the rebel-held province of Idlib is occupying minds.

The United Nations has warned of a civilian bloodbath if the regime forges ahead with the kind of lethal mix of heavy aerial bombardment and attacks from the ground that allowed it to retake other areas including Ghouta and Daraa, where the Syrian uprising began seven years ago. Rebels and their families in those areas have sought refuge in Idlib, and its population is now thought to have swollen to some three million. Many would likely press against Turkey’s borders in the event of a regime strike. That is an absolute nightmare scenario for Turkey as it struggles to care for more than 3.5 million Syrian refugees on its soil amid mounting economic woes.

Turkey is begging for time to work out a deal to separate the “moderates” from the “terrorists” in the al-Qaeda-linked Hayat Tahrir al-Sham, which is the dominant force in Idlib. Erdogan will likely renew pleas for more time during his talks with Russian President Vladimir Putin and Iran's Hassan Rouhani.

Erdogan has some cards to play. Iran is feeling the heat from renewed US sanctions. A second round will come into effect in November targeting the Islamic Republic’s vital oil and energy industry. Turkey secures nearly half of its energy needs from Iran and shares a 500-kilometer (310-mile) border with it, making it a critical access point as Iran grows more isolated. Turkey’s continued cooperation in the face of secondary sanctions targeting countries that do business with Iran is key. Turkey has said it will not comply with US demands to freeze trade with Iran.

France’s Total, Peugeot and Renault and Germany’s Siemens and Daimler have suspended operations in Iran. Last week, Air France and British Airways said they were halting flights to Tehran, shoring up Istanbul's importance as a hub for Iran’s large diaspora community.

Iran’s Foreign Minister Mohammad Javad Zarif showered praise on Turkey on Sunday, saying, “Turkey is a leading country among those we have good relations with.” That's a big stretch, considering that Turkey and Iran are also historic rivals who mostly only unite against common threats, usually the Kurds.

Both Iran and Russia are hoping that Turkey’s own troubles with the United States, sharpened by the continued detention of an American pastor, will play to their advantage.

Russia has reportedly issued a September deadline for Turkey to either cooperate with the offensive or pull out of Idlib. Turkish troops man 12 observation posts in the province that are meant to serve as a buffer between the rebels and the government forces under the terms of the Astana process.

Turkey’s mentorship of a broad constellation of rebel groups began as part of an ill-fated push to overthrow the regime of President Bashar al-Assad. Turkey now views the rebels as bargaining chips to ensure that its interests in Syria are secured. Its number-one priority is to see Kurdish gains reversed. Another is to land a slice of Syria’s reconstruction pie.

Russia has been playing a balancing act so far, helping Turkey push US-allied Syrian Kurds out of Afrin just as it helped regime forces regain lost ground elsewhere across Syria in tandem with Iran.

The lurking fear in Ankara is that if it's pushed out of Idlib, it's only a matter of time before Moscow gives the regime the nod to start nibbling at the Turkish-run Euphrates Shield zone encompassing Jarablus, al-Bab and Azaz, in addition to Afrin. Neither Iran nor Russia want Turkish troops to remain in Syria once Idlib falls. And the regime could very well cooperate with the Syrian Kurds to push Turkey out, especially if Russia closes Syrian airspace over Afrin. That is one of the reasons Turkey does not want US forces to pull out of vast swath of territory in Syria’s northeast that is controlled by the Kurds and their Arab allies. Ankara is demanding the United States end its support for the Kurds and redirect it to the rebels, as it would also strengthen its hand vis-á-vis the regime. But as things currently stand, the United States says it will remain in Syria until the Islamic State is thoroughly defeated, and that entails continued cooperation with the Kurds, who remain the premier force against the jihadis on the ground.