Escalating threats by Yemen's Houthi rebels indicate the group is still not intimidated by the Saudi-led coalition, portending more suffering for Yemeni civilians. 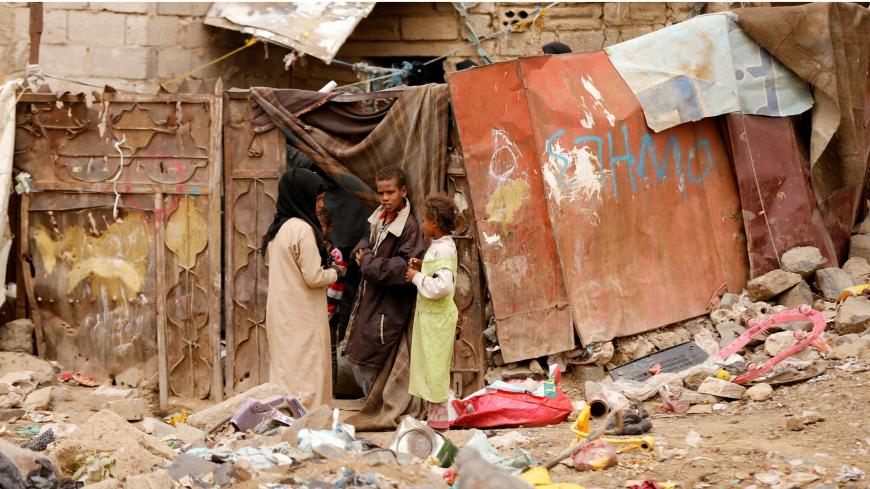 Children displaced from the Red Sea port city of Hodeidah stand outside their shelter in Sanaa, Yemen, July 18, 2018. - REUTERS/Khaled Abdullah

The Iranian-backed Houthi rebels are escalating their threats against Saudi Arabia and the United Arab Emirates. The rebels do not appear intimidated by the Saudi coalition. The Yemeni war is increasingly entangled in the American conflict with Iran, which doesn’t augur well for the Yemenis.

The Zaydi Shiite Houthis attacked Saudi vessels in the Red Sea on July 25. The Houthis claimed that they struck a Saudi warship; the Saudis say it was two oil tankers and announced that they were temporarily halting oil shipments via the Bab el-Mandeb Strait. Their announcement was not followed by others. Oil prices did not jump.

The rebels also claimed that they launched a drone that targeted Abu Dhabi airport. The Emiratis denied this. The Houthis said Abu Dhabi, Dubai and Riyadh should be evacuated immediately before the rebels fire more missiles and drones at them. The Iranian media gleefully repeated the dire warnings on the front page of newspapers.

The Houthis justify their behavior as an appropriate response to the four years of Saudi-led coalition airstrikes on Yemen’s cities and the blockade that has led to mass malnutrition.

The Houthis' missile and drone strikes have so far had limited results. The Red Sea shipping attacks have probably had the most impact but have not shut down the strategic chokepoint at the Bab el-Mandeb. Both the Saudis and Emiratis try to downplay the attacks on their capitals. They hype the sea attacks, hoping to get more outside support, especially from the United States.

But the persistence of the rebels' campaign and their escalating threats this month are a clear indicator that the Houthis are still not intimidated by the coalition. The Houthis still control Sanaa and other major cities. The coalition campaign to seize the major port of Hodeidah has not materialized as a lightning or “golden” victory as the coalition promised. It may still turn into a bloody urban battle that grinds down both sides. The Saudis and Emiratis are not eager for a house-to-house battle with the Houthis, which could exact a large number of casualties.

The missile attacks inherently carry the risk of catastrophic success. A missile hit against a major civilian target in Riyadh or Abu Dhabi killing dozens would place enormous pressure on the Saudi and Emirati leadership to retaliate against not only Sanaa but also Tehran.

Iran appears to be encouraging Houthi intransigence. Iran and Hezbollah provide expertise and resources for the Houthis' missile capabilities. As noted above, Iran's media like to portray the Saudis as under strain and weak. Tehran is well aware that the Saudi war effort in Yemen is a very expensive drain on Riyadh but a small cost for Tehran. Crown Prince Mohammed bin Salman is a favorite target of abuse; the Iranians heap sarcasm on the Saudi defense minister.

The Yemeni war has always been a front, not only in the Saudi-Iranian regional power conflict but also a factor in Washington’s relationship with Tehran. The Trump administration's violation of the Joint Comprehensive Plan of Action was a big step in heightening US frictions with Iran. The administration has significantly increased tensions with Iran this month with the president tweeting catastrophic military action may be considered if Iran threatens America and the secretary of state calling for regime change in a major speech in California. The administration says regime change is not its policy but few in the Iranian regime are persuaded by the disclaimer.

The Pompeo speech was choreographed carefully with the Saudis. The Saudi ambassador in Washington published an editorial reinforcing the secretary’s message. Riyadh, which broke ties with Tehran in 2016, is all in for regime change.

Maj. Gen. Qasem Soleimani, the commander of the Islamic Revolutionary Guard Corps' Quds Force, gave a retort to the United States with the chilling line that Iran is ready to hit Americans: “We are near you, where you can’t even imagine.” It is a clear threat to hit US interests asymmetrically in unexpected locations. Soleimani made explicit reference to the Red Sea. As Al-Monitor has previously reported, Soleimani’s speech is the authoritative statement of the Revolutionary Guard.

As always, the Yemeni people are the victims of the conspiracies and plots of the Houthis, Iran, the Saudis and their allies, the other Yemeni factions and the Americans. Millions are suffering. The CEO of Save the Children has been saying that Yemen is “the worst place in the world to be a child” because of the shortages of food and medicine, the collapse of infrastructure and the breakdown in education.