Will Obama push for Yemen cease-fire?

The United States, which fired cruise missiles at rebel radar sites in Yemen on Oct. 13 after missiles were fired at a US warship, needs to push for an immediate cessation of hostilities in Yemen before things get even more out of hand. 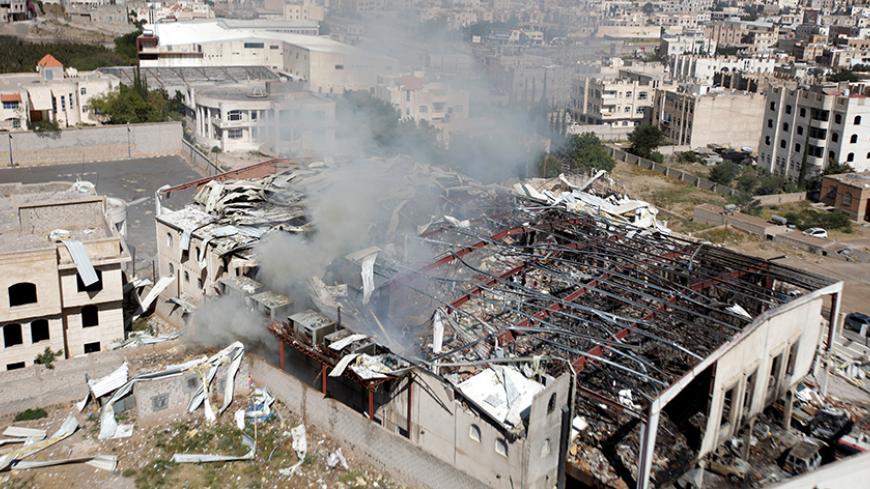 The war in Yemen is escalating and becoming more dangerous. The Yemeni people are facing a humanitarian catastrophe. Unlike in Syria, the United States has significant leverage to halt the war and the suffering. Unfortunately, the frivolous override by Congress of President Barack Obama's veto of the Justice Against Sponsors of Terrorism Act has made using American leverage harder at this critical juncture. But Obama needs to act.

The Saudi-led coalition bombing of a funeral in Sanaa last weekend that killed over 140 mourners and wounded hundreds more has set off a wave of retaliation by the Yemeni rebels who control most of northern Yemen. The rebel alliance of Zaydi Shiite Houthis and followers of former President Ali Abdullah Saleh fired missiles at an American destroyer in the Red Sea. The rebels have long argued that American military, logistical and intelligence support for the Saudi coalition makes Washington a co-belligerent. The Oct. 13 cruise missile strikes against rebel radar sites — absolutely necessary to protect our ships in the strategic waters — will only add to the anti-American narrative.

The rebels have also fired at least one surface-to-surface missile at Taif, a Saudi city near Mecca. They have fired dozens of other missiles and rockets at Saudi border towns and at coalition garrisons in southern and eastern Yemen. They appear to have an unlimited supply of munitions and missiles. Sooner or later, one missile will cause a disaster.

The big beneficiary of the war is Iran. It provides the rebels diplomatic support and limited military assistance. In return, it bogs down the Saudis, Emiratis and its other Gulf enemies in a quagmire in Yemen that is expensive in lives and treasure, when oil prices are depressing their economies at home. Tehran is all too happy to fight to the last Yemeni.

The New York Times this week rightly suggested that Obama use American diplomacy to secure an immediate cease-fire. The United States and the United Kingdom are the Saudis' major arms providers. On Obama's watch, over $111 billion in US arms have been sold to the kingdom. American and British maintenance is crucial to keeping the coalition aircraft in the air. That also makes the countries culpable in war crimes.

The Times editorial reflects growing unease in Washington with Riyadh's war. Although the American media is preoccupied with the drama of our election, the mood on the Hill is increasingly skeptical about arms sales to the Gulf. Despite enormous lobbying efforts, the Saudis face increasing hostility.

The override of the Justice Against Sponsors of Terrorism Act passed the Senate 97-1, a massive bipartisan message to the kingdom. Despite an expensive public relations effort, the kingdom was all but declared guilty of conspiracy with al-Qaeda in the worst terrorist attack in American history by both chambers of the Congress.

As I wrote here in May, Congress has tasked two bipartisan independent investigations to ascertain who was responsible for 9/11. In 2004 and 2015, the studies absolved the government of Saudi Arabia and its officials of any role in the plot and its execution. The kingdom is a vital ally against al-Qaeda and the Islamic State. But both Hillary Clinton and Donald Trump backed the Justice Against Sponsors of Terrorism Act. Few, if any, on the Hill read the reports they commissioned.

Saudi Arabia and its Gulf allies have rightly responded with astonishment at this frivolous act. Despite many calls for retaliation, so far they have kept their powder dry. When legal proceedings begin, as they will, the Gulf states will be hard pressed to show restraint. Whether Clinton or Trump wins the US presidency in November, she or he will inherit a damaged relationship in January.

The damage of the override will also impact Yemeni diplomacy, unfortunately, because it poisons the atmosphere. Nonetheless, Washington needs to use all its leverage now before the conflict escalates further. The Iranians would be delighted to see America get even more bogged down in another war in the Middle East.

The international community is rightly concerned with the horrific tragedy in Aleppo. But it needs to be equally gripped by the tragedy unfolding in Sanaa, Taiz and Saada. The poorest Arabs are being blockaded by air and sea by the richest with our help. The coalition should unilaterally impose a open-ended cease-fire, allow an international investigation of the funeral bombing and lift the blockade. The United States should insist on no less.