Is Yemen headed for partition?

An open-ended cease-fire is needed for Yemen, but a de facto partition of the country is more likely. 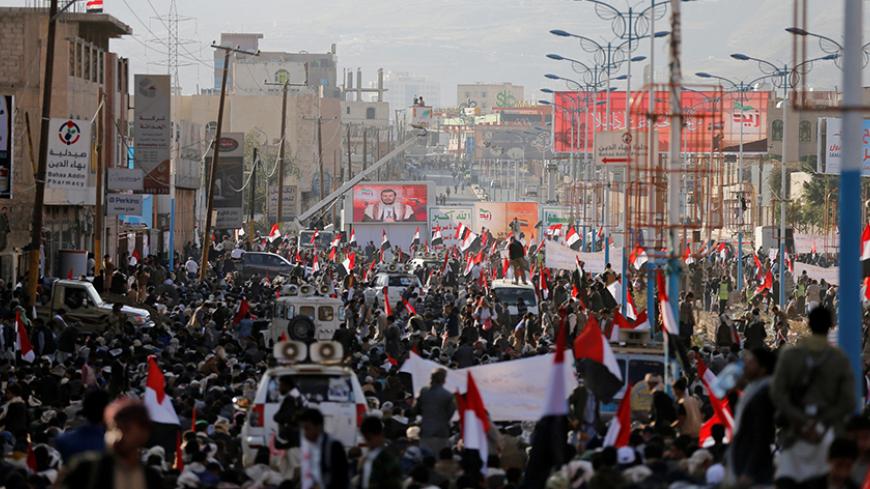 Houthi followers watch as their leader, Abdul-Malik al-Houthi, delivers a speech in Sanaa, Yemen, on Oct. 26, 2016, during a rally commemorating the death of Imam Zayd bin Ali in the year 740. - REUTERS/Khaled Abdullah

The failure of the latest cease-fire in Yemen suggests a long process of attrition is ahead. Neither side appears interested in a political settlement. The de facto partition of the country is increasingly likely.

The 72-hour truce barely ended before Saudi and coalition airstrikes resumed on targets in the rebel-controlled cities in northern Yemen. The United Nations had said the truce was mostly holding, but the coalition charged that the Zaydi Houthis and loyalists of former President Ali Abdullah Saleh had violated it repeatedly. Saudi King Salman bin Abdul-Aziz Al Saud and UAE Crown Prince Mohammad bin Zayed met during the cease-fire and apparently agreed to resume the war.

Saudi-backed Prime Minister Abed Rabbo Mansour Hadi has rejected a United Nations road map for starting a political process. Hadi and the coalition remain committed to the 2015 UN Security Council resolution that demands Hadi's return to power in Sanaa and the rebels' disarmament. As long as that resolution remains the basis for negotiations, the war will go on.

The rebels fired a Scud missile at Mecca, according to Saudi accounts, after the war resumed. This is the second alleged attempt by the rebels to hit Mecca that was intercepted by Saudi air defenses. The attacks on the holy city have been widely condemned in the region. The Houthis said their target was the airport at Jeddah, not Mecca.

Missile attacks were a hallmark of Yemen's last civil war in 1994. The communist south fired Scud missiles acquired from Russia on Sanaa. The north bombed Aden. Saleh's victorious forces acquired the south's missiles and launchers when the south surrendered as well as considerable advanced arms paid for by the Saudis to help the southern secessionist movement. After the war, Saleh acquired more missiles and launchers.

The Iranians are assisting the rebels with expertise and equipment. Oman reportedly is a significant smuggling route to evade the Saudi blockade. The Omanis refused to join the Saudi coalition at the start of the war. If arms are being smuggled through Oman's Dhofar province, it shows that much of southern Yemen is not under the firm control of the coalition forces. Muscat denies any involvement in arms smuggling.

The Saudis have sought to oust Saleh from power in Yemen for over a quarter century. Riyadh was convinced in August 1990 that Saleh was conspiring with Iraqi leader Saddam Hussein to carve up the Arabian Peninsula between Iraq and Yemen and possibly with Jordanian King Hussein as well. The Saudis pushed President George H.W. Bush to cut aid to Yemen, and the Saudis deployed considerable forces on the Yemeni border during the liberation of Kuwait in Operation Desert Storm.

After the war, the Saudis encouraged the southern separatist movement to rebel against Saleh. The Saudis encouraged Sunni tribes to defect with large financial promises. Saleh retained the support of the military and suppressed the rebellion, humiliating the House of Saud. President Bill Clinton kept America on the sidelines of the war.

Aside from surviving in power, Saleh's major success was to unify north and South Yemen in 1990. It was a peaceful process. Now, 26 years later, Saleh has helped redivide the nation. He and the Houthis control most of the Zaydi-populated centers, and the coalition-backed government controls the Sunni centers. Yemen's life as a unified state is increasingly in jeopardy.

President Barack Obama has wisely begun to distance the United States from the Saudi campaign. Washington has been more critical of airstrikes that hit civilian targets. But US assistance continues to keep the coalition forces operating. US logistical support and arms deliveries need to be adjusted to pressure the parties to accept a political process.

A political solution will require both parties to make significant concessions. Hadi and his supporters need to accept that his government is too tainted to return to power. It should be replaced by an interim government. Saleh needs to recognize that he and his family are also too tainted to serve in government any longer. The Houthis need to withdraw from the capital to let an interim regime take charge.

None of this is likely, so de facto partition may be the only realistic option for the foreseeable future. The international community should try to persuade the warring parties to adopt an open-ended cease-fire without conditions. Then a massive surge of humanitarian relief should begin. The international community can provide monitors to ensure that arms are not smuggled in during the truce. Yemen has gotten far too little attention from the world, understandably focused on Syria and Iraq, but that needs to end.