Can Russia deliver on Trump’s hope of ousting Iran from Syria?

In the run-up to the Putin-Trump summit, Russia weighs a possible deal with the United States on Syria, but can it deliver on Washington's vision of an Iran-free Syria? 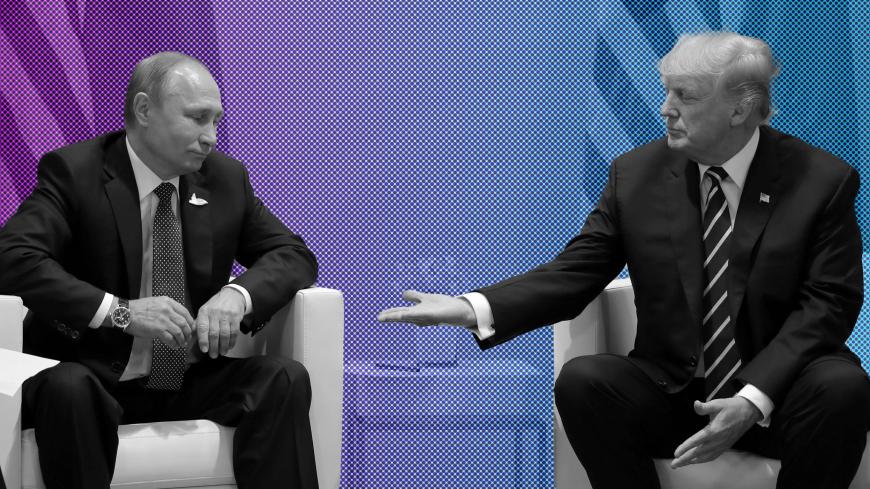 Syria may be the main topic of discussion between Vladimir Putin and Donald Trump at the pair's July 16 summit in Helsinki, according to sources cited by Russia's Kommersant newspaper. Moscow has already passed along to Washington a two-page document that could serve as a draft for a bilateral communique the presidents are expected to present at the end of the summit next week.

Syria is one of the few items on the agenda that could lead to actual agreements between Putin and Trump. The outline of any deal on Syria, though still blurred, can be discerned from recent trends in Syria. Any agreement will involve a trade-off: In return for fully withdrawing its troops from Syria and for giving up its demands to remove Bashar al-Assad’s government from power, the United States wants Russia to be held responsible for limiting Iranian influence in Syria.

In fact, some aspects of the secret agreements between Russia and the United States are already being implemented. For instance, take the Syrian regime’s attack, beginning June 18, on the opposition's southern front in Daraa and Quneitra provinces. This attack, which took place in the southwest de-escalation zone secured by Russia, Jordan and the United States, was only possible when it became certain that the United States would not respond to cease-fire violations with force. The US Embassy in Amman sent a letter June 24 to leaders of the Southern Front factions stating that the opposition should not expect any support from the United States. That same day, the Russian air force joined the Syrian army offensive.

Israel and Jordan also gave Moscow the green light to conduct the operation in Daraa and Quneitra provinces, under the condition that only Syrian government forces would be deployed and that all pro-Iran groups — primarily Lebanon's Hezbollah — would be removed from those areas.

As a result, Russian delegates and Syrian opposition groups from the south reached an agreement July 6. The Southern Front will likely withdraw 6,000 of its soldiers and move them to the northwest, in particular opposition-swamped Idlib. Some Southern Front members will stay in the south under the condition of disarmament. It is possible they will receive the status of a local armed group under the government flag. Some dissident factions may even join the Syrian regime’s 5th Assault Corps, which was created with Russian assistance. Groups of that kind, together with the Russian military police, can secure the region from pro-Iran groups — a scenario that Washington, Tel Aviv and Amman will likely promote.

The United States’ willingness to sign a deal with Russia appears to stem from Moscow’s perceived ability to stop Tehran from strengthening its position in Syria. Indeed, Moscow has increased its presence in Damascus, seeking to influence the government's decisions and to displace the Iranians from their previously invincible positions among leaders of the Baath regime.

Moscow has shown Damascus that it can support the regime without any help from Tehran. Russia has also demonstrated its ability to support the Syrian government in its efforts to reclaim territories still under opposition control. While pro-Iran troops played a major role in the Idlib operations of late 2017 and early 2018, and later operations in eastern Ghouta in March and April 2018, the Shiite militants affiliated with the Islamic Revolutionary Guard Corps did not take any significant part in the fighting. On the contrary, Russia had the final say, both in the negotiations with the opposition and in forcing the rebel factions to accept surrender conditions for eastern Ghouta.

As for the current campaign in the south, Moscow was able to influence Damascus to exclude Hezbollah from participating in the Daraa and Quneitra operations. Russia has become the leading force in the fighting of and in the negotiations with dissident factions. In all, Russia has proven it can successfully solve problems for the Syrian government without the aid of pro-Iran forces. Furthermore, Russian military officers have recently enhanced the capabilities of the Syrian army's Tiger Forces. The Tiger Forces have successfully substituted Hezbollah forces on the battlefield as a main attacking power.

One reason why Damascus might be open to turning away from the pro-Iran vector is the return of US sanctions on Iran. There’s a view in Moscow that Syrian leaders are sensibly worried that excessive dependency on Tehran is likely to drag Syria down as well. With the return of sanctions, Iran may not be able to provide Syria any financial support, and Syria will not have the time to find alternative aid sources. A potential incentive for Damascus to reduce its ties with Iran could be found in investments from the Gulf. After all, the Gulf monarchies' support for the Syrian revolution was more of an attempt to pull Syria out from under the Iranian umbrella rather than remove the Baath regime, as such.

Policymakers in Moscow are also weighing whether the "surrender" of the south can be considered a prologue for the United States' withdrawal from the north. Such a withdrawal would be in line with Trump's statements regarding the need to end the US military presence in Syria. Meanwhile, for Syrian Kurds, the prospect of standing face to face against Turkey is pushing them to seek a compromise with Assad’s regime. Russian media, quoting the Syrian daily Al-Watan, reported that Damascus held secret talks with leaders of the Kurdish Democratic Union Party, which controls northern Syria. The Kurds are allegedly trying to reach an agreement with Assad, as they are expecting attacks from the Turkish army and its Syrian allies after the United States removes its security umbrella.

Yet Russia's capability to push Iran out of Syria entirely is limited. Large regions of the country are of vital interest to Tehran, especially Aleppo, Deir ez-Zor and Hezbollah-controlled areas near the Lebanese border.

A source in the Russian military told Al-Monitor, on condition of anonymity, that Tehran has created a multilayered presence in these regions through both Shiite troops from Iraq and Afghanistan, the latter known as the Fatemiyoun Division, and pro-Iran units of Syrians, such as the Local Defense Forces in Aleppo. In these provinces, Iranians buy property and distribute it to militants, both foreign and Syrian, from other areas.

“The facts prove that Iran has already sprouted its roots in those regions,” he said.

Considering all this, it is still uncertain whether the United States will leave Syria if large parts of it are controlled by pro-Iran forces. The US surrender of Daraa and Quneitra may be seen as a “service in advance” for Russia. However, any further steps that Washington takes — including a refusal to implement a leadership shift in Syria or to withdraw its military — will depend on Russia’s efforts to minimize Iranian influence. Practical attempts by the Syrian regime to remove pro-Iran groups from the country could include the prospect of sanctions relief and of possible financial aid from the Gulf for reconstruction.