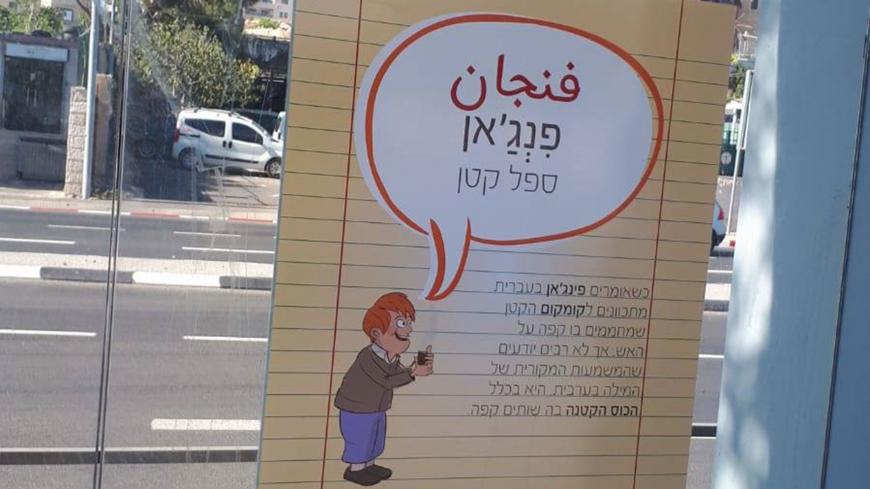 Jerusalem Light Railway is sponsoring Arabic Language Week with poster displays to cultivate familiarity and respect among Israelis for the Arabic language and Arabic speakers, in this image uploaded June 27, 2018. - Facebook/madrasafree

Jerusalem Light Rail launched an initiative this week to promote Arabic language learning among Israelis in the city. It's the first such campaign in the tram system's seven years of operation.

Although around 20% of Israel’s population is Arab, Arabic comprehension among Israeli Jews is very low. A survey published July 4 by Israeli-Arab coexistence group Sikkuy found that a mere 8.6% of Israeli Jewish adults have a working knowledge of Arabic compared to more than 60% with the same competence in English.

The tram, which began operating in 2011, runs through the heart of the contested holy city, from Jewish neighborhoods in the west to Palestinian neighborhoods in the east. Along the way, it passes the Old City with its holy sites, the bustling Mahane Yehuda Market, Palestinian refugee camps and Israeli settlements. Though construction of the light rail was fiercely opposed by Palestinians, it has become the city’s main artery, carrying about 160,000 passengers a day, a large portion of them Palestinian residents of the city.

Jerusalem is Israel’s most populous city, home to 856,000 people, around 40% of them Palestinians. Israel captured East Jerusalem from Jordan in the 1967 war and annexed it, a move unrecognized by the overwhelming majority of the international community. Palestinian East Jerusalemites have residency, but not citizenship. The Palestinians insist that East Jerusalem be the capital of any future Palestinian state.

The campaign to promote Arabic is being sponsored by the privately owned CityPass, which operates the light rail, the Jerusalem Intercultural Center (JICC) and Madrasa, an online Arabic school for Hebrew speakers. JICC director Hagai Agmon-Snir called Jerusalem a “center of tolerance” in the day-to-day lives of Jews and Arabs, a fact sometimes obscured by occasional outbreaks of violence.

“A short ride on the train shows that there are passengers of every sort on the train. There are Jews and Arabs, ultra-Orthodox, secular, religious, Muslims, Christians, Armenians, tourists, young and old, students,” CityPass spokesman and marketing director Ozel Vatik told Al-Monitor. With the train serving all the city’s populations, he said, the initiative's goal is to bring Israelis and Palestinians together.

East Jerusalemites have greater exposure to Hebrew in their daily lives — as some 35,000 work in the western part each day, Agmon-Snir said — than Jewish Israelis have to Arabic. He said that the project’s aim is to cultivate familiarity and respect among Israelis for the Arabic language and Arabic speakers.

For Arabic Language Week, ticket inspectors have been handing out booklets with words and phrases in Arabic along with their Hebrew translations. Although some of the phrase book’s expressions are useful, teaching Hebrew-speaking passengers polite expressions, such as “Pardon me” and “Would you like my seat?,” others are questionable. “It’s like Europe here” and “How nice it is to sit in the air conditioning,” have little practical use and are more likely to cause puzzlement.

CityPass also sponsored two free Arabic-language courses at one of the central stations outside Jerusalem’s Mahane Yehuda Market. They were booked beyond capacity.

Posters featuring Arabic words along with their Hebrew pronunciation and explanations are being displayed at stations throughout the city. Some of the posters were defaced within days at several East Jerusalem stations along the city's traditional divide. In one instance, the Arabic words for “light rail” were crossed out and the “Arabs out” scrawled in Hebrew below it.

Jerusalem Light Rail prides itself on being the only public transportation system in Israel that broadcasts announcements and posts notices in Hebrew, English and Arabic. Vatik told Al-Monitor that the rationale behind Arabic Language Week was to help bridge the language barrier separating Palestinian and Israeli residents of the city.

Most East Jerusalemites who spoke to Al-Monitor outside the Damascus Gate were unaware of the campaign. Mohammed Abu Khdeir, an engineering student from East Jerusalem’s Shuafat neighborhood, told Al-Monitor that while the intent of the Arabic campaign was positive, its execution could have been better.

“Look at this poster. One word of Arabic and nothing else,” Abu Khdeir remarked, pointing to a sign explaining the Arabic word for meat. “There’s no way to know what this is about.”

Asked what Arabic phrases he thought Israelis should know, he paused pensively before replying, “Nobody has ever asked me that before.” He suggested that the light rail try a similar initiative to help East Jerusalemites learn Hebrew. Hebrew is not taught in East Jerusalem schools, which have a Jordanian curriculum, but a growing number of East Jerusalemites are investing in learning the language to help them navigate life with Israeli Jews.

Vatik said he has received a lot of feedback from Arabic Facebook users on the CityPass site asking for a Hebrew-language initiative, and he hopes to launch one in the near future.

“In the end, we’re riding together, and we live together in this city, and it’s not a bad thing to be familiar with the other’s language. I think there’s a lot of good in it,” Vatik said.