Could Jerusalem's youth revolt turn into an uprising?

Despite efforts by Israel and Palestinian Authority to ease tensions in Jerusalem, clashes between Palestinian youth and Israeli police may turn into a full-fledged uprising. 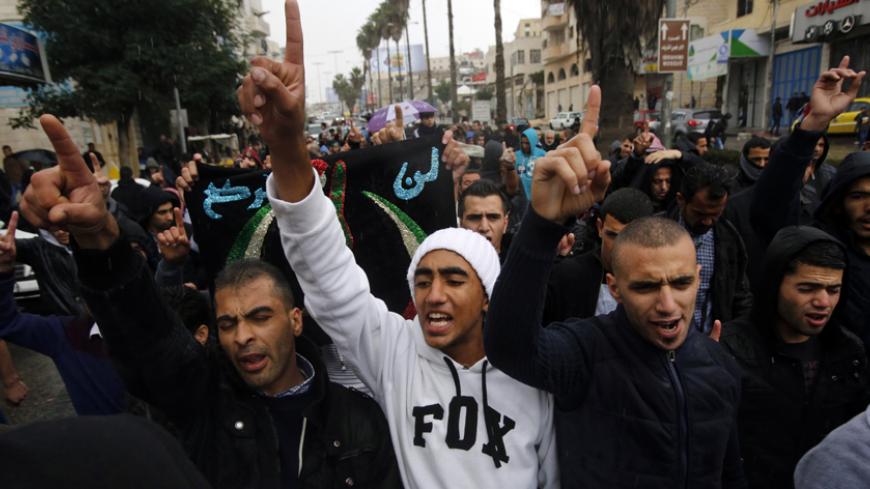 Palestinians take part in an anti-Israel rally over the entry restrictions to the Al-Aqsa Mosque, in the West Bank city of Hebron, Oct. 31, 2014. - REUTERS/Mussa Qawasma

RAMALLAH, West Bank — The pace of developments escalated in Jerusalem following the assassination attempt of Rabbi Yehuda Glick and the killing of Moataz Hijazi. Events took a new turn, especially after the Israeli authorities closed Al-Aqsa Mosque for a day for the first time since 1967. It reopened the compound on Oct. 31 to those older than 50 for Friday prayers.

The escalation came hours after Israel tightened its security grip on Jerusalem and adopted a policy of “collective punishment” against the Palestinians in response to clashes that erupted with Israeli police in the city.

The Palestinian Authority (PA) deemed the Israeli decision to close Al-Aqsa compound as a declaration of war, while Israel and the settlers continued to accuse the PA of being behind the events. Palestinian President Mahmoud Abbas had, however, announced in an interview with Israel’s Channel 10, before Glick's shooting, that he was against the outbreak of a Palestinian uprising in Jerusalem.

Since the kidnapping and killing of Mohammed Abu Khdeir on July 2, Jerusalem has been experiencing confrontations on various levels of intensity.

Hanna Omeira, member of the PLO Executive Committee for the city of Jerusalem, told Al-Monitor that the confrontations in Jerusalem broke out as a popular reaction to the collective punishment policy practiced against both the population and the sanctuaries.

Fakhri Abu Diab, member of the Committee for Defense of Silwan, told Al-Monitor that the uprising in Jerusalem is the result of accumulations and behaviors on the part of the occupation’s policy in the city, such as oppression, the absence of a political solution and the expanding settlements.

Although four months have passed since Abu Khdeir's death, the clashes involving youth are — albeit irregular — continuing.

Jerusalem-based youth activist Mesbah Abu Sabih told Al-Monitor that the intensity and points of engagement of the clashes vary from time to time; they reached their peak following the death of Abu Khdeir and recur following each new martyr in the city.

He recognized that the confrontations are periodical as they depend on the developments in the city, but that there are places where confrontations occur often, such as in the neighborhoods of Issawiya and Silwan, and the Saadia, Bab Hutta, Ras al-Amud and Tur neighborhoods in the Old City.

Abu Diab said that this uprising is led by youths aged 14-to-20 who use all means to resist the occupation. They are aware of the threats facing both their city and their future, and they know full well the nature of the conflict with the Israelis.

Confrontations are spontaneous and lack national leadership, which raises questions about the possibility of their continuity in light of the security grip imposed by Israeli forces.

Abu Sabih said that no one is supporting or leading the street protests. This is why they are ongoing in some areas and intermittent in others. “There is no leadership managing things on the ground. The lack of leadership is the cause behind the irregularity of the protests, which have become linked to events alone.”

Abu Sabih added, “The lack of leadership and the grip of the Israeli security forces will not stand in the way of the uprising in Jerusalem,” in light of the resistance toward Israeli projects, especially the division of Al-Aqsa.

“The protests against the occupation measures will continue as long as Israel continues its policy in Jerusalem," Omeira said.

Omeira added that it is difficult to form a national leadership in Jerusalem. "I cannot compare the current situation to what it was during the first intifada, when there was a unified command, because the circumstances are different, and this depends on the political forces."

However, Jamal Amro, a specialist in Jerusalem affairs, has an opposite viewpoint. “If there is no Palestinian decision from the highest levels to raise the morale of Jerusalem citizens, and if no clashes take place [elsewhere] to relieve the pressure put on them, then the city would not survive for long," Amro said. “As long as Jerusalem is in the grip of security and the blockade, [the city] will not survive for long,” even if developments on the ground fuel the uprising.

Nabil Amro, a Fatah leader and member of the Central Council of the PLO, confirmed in a newspaper article that the PA, the PLO and the Palestinian parties are neglectful in supporting Jerusalem.

Israel's concern about the confrontations seems apparent in different ways. These concerns grew deeper following the shooting of Glick. Israeli newspaper Maariv quoted ministers saying that Netanyahu has lost Jerusalem. The mayor of Jerusalem issued an order on Oct. 29 to enforce penalties against the youths who are clashing with Israeli police and pressure the Palestinian population to act against these youths.

Hebrew media outlets put the spotlight on the intense developments witnessed by Jerusalem, while Israel’s most prominent authors described the events as a “silent uprising.” Meanwhile, two Israeli researchers warned of the explosion of the situation in Jerusalem in light of the increasing Israeli security measures based on the sole use of force. The Israeli paper Yedioth Ahronoth wrote on Oct. 31 that the conflict in Jerusalem turned religious and that it might spread across the Middle East.

“The Jerusalem uprising frightens and bothers Israel because it proves its failure to tame the population, change their identity and Judaize their culture through normalization and integration in Israeli society,” Amro said.

He added that the measures by the Israelis in Jerusalem made the Jerusalemites discover that they are “the poorest and that they ought to face the occupation, something that surprised Israel, which thought that Jerusalemites had calmed down and that the normalization project had succeeded.”

Meanwhile, Antoine Shalhat, director of the Madar Center for Israeli Studies, told Al-Monitor that Israeli concerns stem from the importance of Jerusalem in the Arab-Israeli conflict and from its refusal to make any concessions at the negotiating table.

Shalhat said that Israel regards the battle for Jerusalem as the mother of all battles. “The confrontations reflect a challenge for all of its immediate and strategic plans in the city, which are based on the imposition of facts through land expropriation, settlement and expulsion of the Palestinians.”

According to Shalhat, Israel’s measures in Jerusalem reflect Netanyahu's vision for the government, upon which all parties agree and which are based on the Israeli rejection of a settlement with the Palestinians and on the acceleration of steps aimed at imposing facts on the ground that embody this vision.

The general atmosphere in Israel shows that the Netanyahu government continues to implement its projects in Jerusalem as it supports settlers, which means a further eruption of the situation in the city and the continuation of spontaneous confrontations led by young people. These confrontations are likely to develop into an uprising at some point, but no one can predict the extent they might reach.